The anxious art and activism of Leon Bibel. 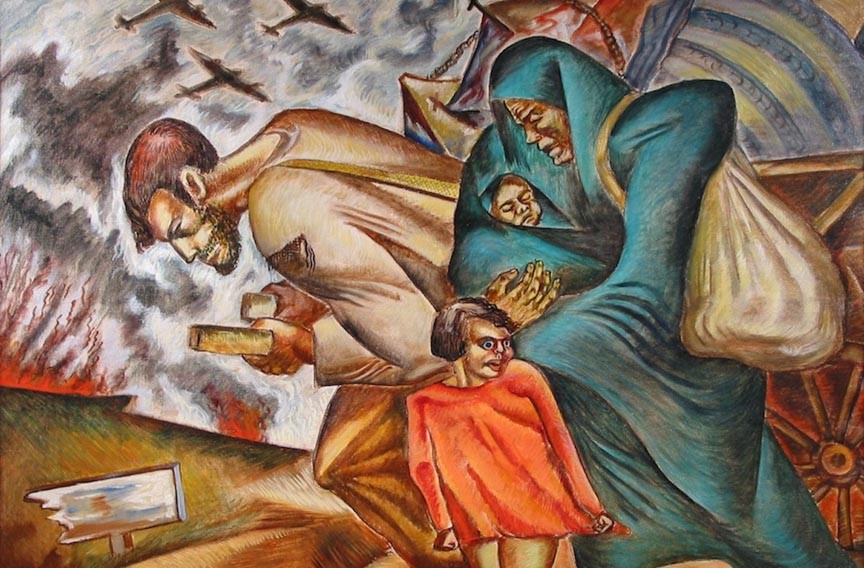 Unemployment, poverty, racism, social protest, war overseas — the issues facing the United States in the past decade provide myriad inspiration for artists. So the new exhibit at the University of Richmond addressing such challenges to the human spirit hardly comes as a surprise. What may catch viewers off guard is that the body of work in "Leon Bibel: Art, Activism and the WPA" was created 75 years ago.

The anxiety that hung over the country during the Great Depression found expression through artists such as Bibel, who were hired by the WPA as part of the Federal Art Project. The artists were paid $23.86 per week — plus access to a studio, materials and equipment — to study, teach and produce art. The project also encouraged camaraderie among the artists, resulting in many shared techniques and social concerns.

Presented as part of university's year-long interdisciplinary focus on arts and activism, the exhibit was inspired by curator Phyllis Wrynn's film, "Leon Bibel: Art and Activism in the WPA," which shows continuously in the gallery.

Wrynn, director of the Park Slope Gallery in Brooklyn, had curated a Bibel show in Philadelphia, one with a much broader focus, when Richard Waller, executive director of university museums, suggested a show tied to the film.

"This is a very different show," she says. "I kept to the theme, the reaction to war, the despondency of the people, racism, unemployment and generalized anxiety. It's more clearly about social justice and the insanity of war."

An entire wall of the gallery has works depicting the Spanish Civil War, the first war in which aerial bombardment targeted civilians, and fear of airplanes is a recurring theme. Bibel was among a group of artists concerned about Francisco Franco's intentions, trying to call attention even before the dictator allied himself with Hitler and Mussolini. Similarly, the 1937 etching, "Food Not Cannon," is a desperate cry against war, showing people starving while the military gears up for another world war, which seemed impossibly soon after World War I.

Bibel worked for the Federal Art Project from 1936 through 1941 before setting art aside to be a chicken farmer in rural New Jersey to support his family.

"Leon felt he had to be a good family man and earn a living," Wrynn says. "But as the kids got older, he returned to painting and produced thousands of large-scale paintings, many influenced by the Mexican muralists of the Depression era."

One of Bibel's children, daughter Elaine Cater, came from England for the opening of the UR show. She recalls her father always was sketching.

"He didn't want us children to be artists ourselves, so we were never encouraged," she says, sitting on a bench surrounded by her father's art. "I remember my parents went to a parent-teacher meeting when I was in kindergarten. The teacher said I wasn't very good at coloring because I didn't color inside the lines. Leon was incensed, thought they were trying to take away my creativity."

Cater went on to become a knitwear designer, recalling deeply felt pleasure when she showed her father her early design sketches and he liked them.

"Growing up, we always had his silkscreens up on the walls. He had two types, the happy ones and these," Cater says, gesturing at the walls. "I always felt these were pushed to the background. Part of him didn't want to open up to us about them. Seeing them here now, it sort of takes your breath away." S

"Leon Bibel: Art, Activism and the WPA" runs through Nov. 11 at the University of Richmond's Lora Robins Gallery. For information call 289-8276 or go to museums.richmond.edu.