Sad in the Key of Happy 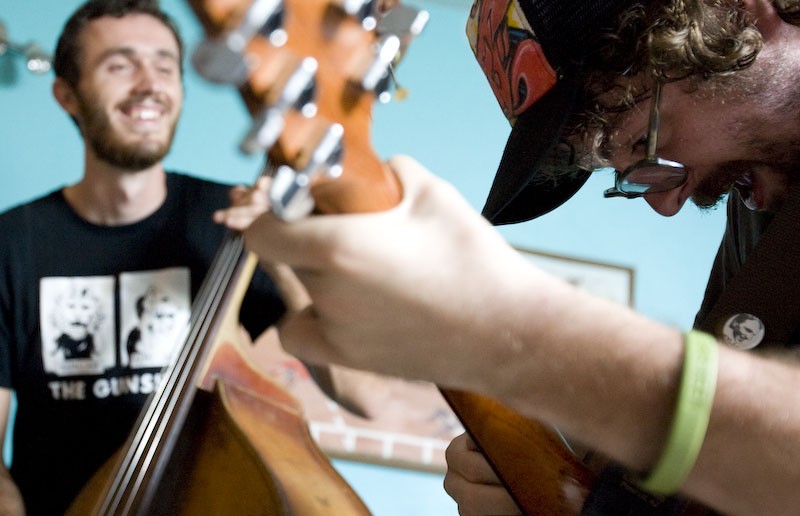 One of the most striking things about Andrew Jackson Jihad is how intensely its fans sing along at shows.

"I think the people that really, really like our band finds something special in how direct the lyrics are," says singer and guitarist Sean Bonnette, one-half of the Arizona-based duo; the other member is Ben Gallaty.

The band's lyrics are not for everyone, though. People tend to either love them or hate them. Their words are dark, uncomfortable, honest and funny, usually all at once, like in the song, "People II: The Reckoning": "There's a bad man in everyone/ no matter who you are/ There's a rapist and a Nazi/ living in our tiny hearts."

Not all their lyrics are such grandiose statements about humanity, but even the personal ones evoke a similar complex range of emotions, as in "Who Are You?," where Bonnette sings of his father abandoning him as a kid: "Thank you so much for not raising me/ You spent your life on better things/ You would have been an awful dad/ Thank you for those genes you had."

The lyrical content of their songs are a stark contrast to the music, which is an upbeat, campfire, singalonglike folk music. The dissonance creates what Bonnette calls "sad in the key of happy."

"I don't think we're a depressing band," he says, "even though we have super depressing songs. Kids will email us that they were really upset that day and then listened to some of our music and they felt better. Hearing those feelings verbalized, then being able to verbalize [them] yourself can be really cathartic."

After touring and playing primarily as a folk band for six years, Andrew Jackson Jihad switched gears for its most recent album on Asian Man Records, "Knife Man," which has very few straight forward folk songs. Listeners will find punk, roots rock, blues, country and even some indie-rock sounds. What hasn't changed is the dark, blunt humor of the lyrics.

"There wasn't too much thought that went into that stuff other than our growing resentment of being pigeonholed as a folk-punk band. That's always something we've been told. We stopped agreeing with that after a while," Bonnette says.

This shift in music partially came about because the band wanted to approach the recording process differently. Rather than bringing in a bunch of already-written songs into the studio, they treated their songs as blueprints and collaborated with several musician friends to form the structures of the songs in the studio.

"We got to experiment a lot. We got to change a lot of songs from how they sounded originally to turn them into something completely different. That's always been a big dream of mine, go into the studio with a skeleton of a song and then fucking tweak it," Bonnette says.

The group began a full United States and Canadian tour Sept. 20, opening for English singer and songwriter Frank Turner. For this tour, it still plays its songs, even the new ones, as a folky two-piece band, something that might change in the future.

"We're hoping to do a live band tour and realize those songs as they were played on the record," Bonnette says. As of now, no plans have been made for a full band tour. The members still are deciding how they want to do it.

Until now, folk has always been a part of how people have identified Andrew Jackson Jihad. The other major trait -- honest, darkly funny lyrics -- has evolved over time. Originally the lyrics were more over-the-top and silly, like on the first album, 2005's "Candy Cigarettes and Cap Guns," which Bonnette now says he feels embarrassed by. "I was sick of being called hilarious all the time. I was like, 'You don't understand. I'm trying to sing these songs that are complete exaggerations, but they're serious songs.' But listening back on them, they weren't serious songs."

By the time Andrew Jackson Jihad recorded the next album, "Issues Problems," in 2006, it moved away from the overt silliness and started to write tunes that were more direct, rather than hiding behind over-the-top goofiness.

"I think every time I write a new song I feel like I've become a lot more articulate about how I'm expressing myself. Listening to my first attempts, I made the entire songs jokes," Bonnette maintains. "As a songwriter, I'm much happier with the songs on 'Can't Maintain' [from 2009] and 'Knife Man.'"

The singer is also happy with the musical variety on the latest record and hopes to continue to make more unusual and unexpected releases in the future. "We'd like to be Ween but with less camp," he says. "They do whatever they want."

Andrew Jackson Jihad performs at Canal Club with Frank Turner and the Sleeping Souls and Into It, Over It on Sept. 24 at 8 p.m. Tickets $13-$15. All ages. For information, go to thecanalclub.com.