Project in and around the Southern States silos will coincide with RVA Earth Day Festival. 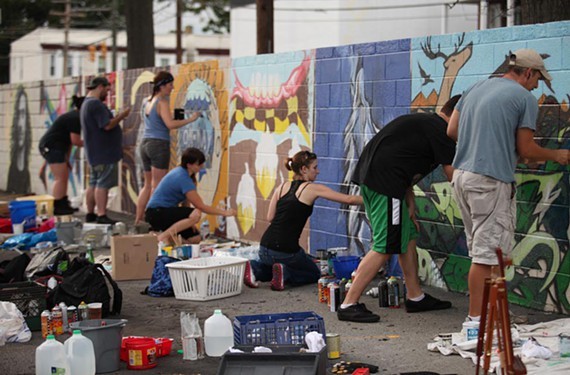 Earth Day weekend in Richmond will see a big expansion with the addition of the popular RVA Street Art Festival. The group plans to unveil its third annual project in Manchester on April 21-24, in the area around the Southern States silos.

The Street Art Festival will be held in conjunction with the RVA Earth Day Festival produced by Style Weekly on April 23, west of the silos near the floodwall and in and around Plant Zero. Organizers expect the event to draw tens of thousands of visitors, as it has in the past.

Organizers of the RVA Street Art Festival say they're going to revitalize part of the James River Project next to the silos, which is part of the Manchester Canal Project. Plans include an interpretative exhibit along the Slave Trail, sculptures, steamroll printing, painting, as well as the images of Richmond-raised photographer LeRoy Henderson of New York, in addition to artisan markets, food trucks and craft beer.

Co-organizer and City Councilman Jon Baliles notes that the festival is waiting to hear back regarding OSHA requirements for painting any of the active grain facilities in the area. Their requests are being analyzed by the Purdue safety team.

“The thrust of the festival will still be the area around the silos,” Baliles says. “But we’re reaching out to other Manchester areas as well, such as the dog park.”

“Personally I think the most pronounced effect the festival has brought is the different level of appreciation for art awareness and creativity in the city,” Baliles says. “[Organizer] Ed [Trask] and I joke we couldn’t have done this 10 to 15 years ago in Richmond.”

The GRTC terminal off Cary Street, a previous location for the festival, was sold -- so previous artwork will be lost. But Baliles says that past projects such as the art created at the Canal Walk area only have made those areas more popular.

“People flock down there now. They take guests and visitors to these areas,” he says. “It’s unfortunate about the GRTC, but we’ll still have a lot of pictures.”

The festival has four employment opportunities and various sponsorship packages, ranging from gallery sponsor at $1,000 to $50,000 for presenting sponsor. It's using Venture Richmond again as its fiscal agent. You can click here to help support the festival.

More information and updates on the RVA Earth Day Festival may be found at RVAEarthDayFest.org..