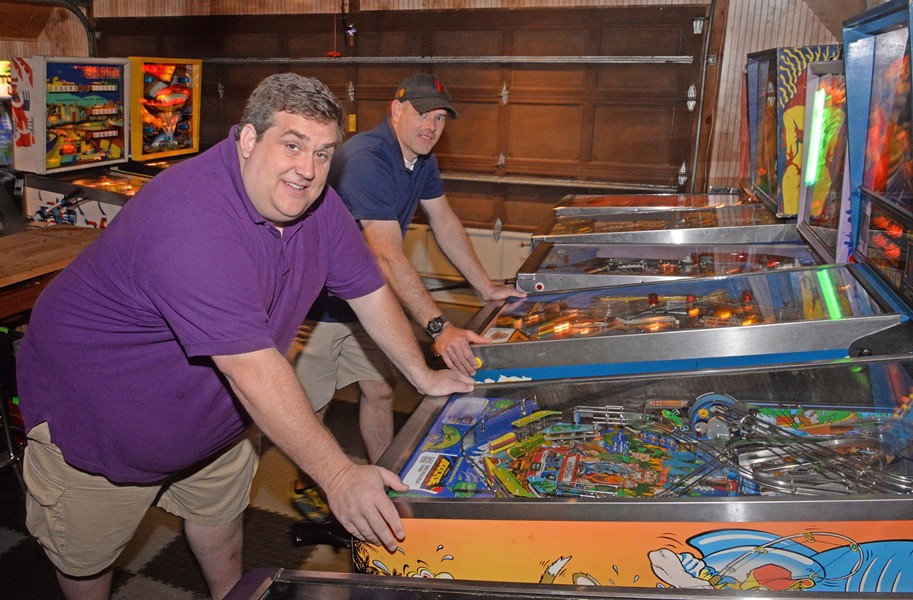 Scott Elmquist The co-founders of the River City Flippers, Chris Booberg and Taylor Reese, say Richmond’s pinball scene could be bigger if there were more places to play. For now, their league meets in private homes.

When Pac-Man was gobbling up the hearts and minds of kids in the ’80s, not everyone was plunking down quarters for a turn at the joystick. There were plenty of pinball machines standing by for a more kinetic thrill.

Today you’d be hard-pressed to find a public outlet for pent-up flipper frustration. There are Bailey’s Smokehouse & Tavern locations on the South Side and on West Broad — which recently landed three machines, lawyer Chris Booberg says.

Otherwise, there’s his place and that of buddy Taylor Reese, who co-founded the River City Flippers pinball league about three years ago. Their league is about to step out of the shadows for its first public tournament May 17 at Isley Brewing Co.

“I think the thing about pinball is the physics and the randomness,” Booberg says. Video games, which won out when he was in grade school, have patterns you can figure out. “And it becomes more difficult progressively,” he says “where pinball is difficult from the beginning.”

Because of the lack of machines available across town, the Richmond-area league is limited to 20 members — with a waiting list. Members get together once a month at a co-founder’s house to hang out, drink beer and work on their game techniques. They’re on Facebook and have a website at RVApinball.org.

And while they’ve held charity tournaments before, Sunday’s event at noon is the first public undertaking, an event to raise money for FeedMore. Booberg, Reese and their crew plan to lug seven machines to Scott’s Addition, where Isley is making room for the action. Participants are limited to 36, though anyone can watch the excitement.

“A thrilling game is one in which you’re able to get the machine to do something that you haven’t been able to do before,” Booberg says. “You feel like you’re in control of the ball and in control of what you’re doing.”

And yes, participants can rack up official International Flipper Pinball Association points. Someday, the league may grow. And perhaps even find the next Jorian Engelbrektsson. The Swede stands atop the World Pinball Player Rankings.