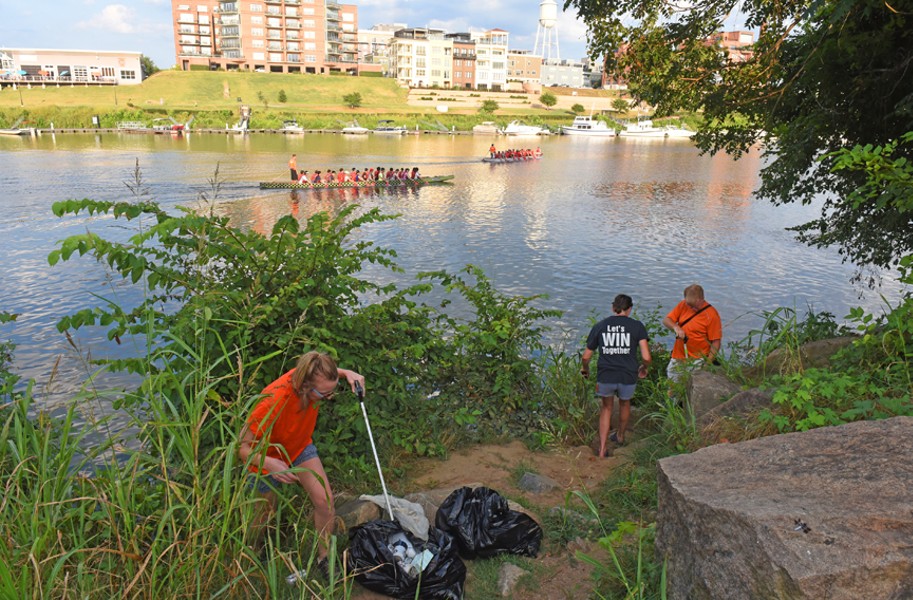 Scott Elmquist At Ancarrow's Landing, volunteers with RVA Clean Sweep fill 50-gallon trash bags with litter thrown into or left beside the James River.
“I'm not sure how this happened,” says Catherine Sullivan, holding up a Fanta bottle wrapped in a tangled web of fishing line. She’s standing next to a sign posted by the James River Outdoor Coalition that says, in six different languages, “Thank you for using the trash can or taking your trash home.”

Armed with 3-foot-long grabbers, the volunteers of RVA Clean Sweep collect one piece of garbage after another from the riverbank at Ancarrow’s Landing: a plastic bag of rancid bait labeled Rusty's Mean Green Shad, a diaper inside a bag of Funyuns and a dog crate wrapped with an extension cord.

Volunteer Stacey Firefly says she confronted a woman in the parking lot about throwing lottery tickets on the ground. She received just a stare in return.

“Look, I use the park just like everyone else, and I love it,” says Dave Parrish, one of the founders of RVA Clean Sweep. “But I can't stand seeing all the garbage. It drives me insane, so that's why I'm out here.”

It started as an art project. Parrish — a photographer —and Amy Robins and friends wanted to photograph flow artists – such as hula-hoopers — in littered areas of Richmond, then have them move to reveal pristine space behind them. One day in May 2014, Parrish, Robins and about 30 volunteers met in a wetland off Midlothian Turnpike. After 45 minutes, they filled 50 large garbage bags.

The art project was abandoned, but the cleanup was a success. RVA Clean Sweep was born: a cadre of volunteers, coordinated through Meetup, who meet around the city for quick litter-pickup efforts. The group visits city parks and neighborhoods where residents have requested their help — Brookland Park, Oregon Hill, Randolph, Forest View, Newtowne West. Last year, the organization logged more than 1,100 volunteer hours and collected around 13,000 pounds of trash.

It’s gratifying to see the results, Robins says, but the problem will never be solved until the city invests in changing litterers’ behavior. She served on Richmond’s Clean City Commission, which was supposed to receive $245,000 appropriated by City Council to help develop an anti-litter campaign. The former city auditor, Umesh Dalal, found the money was improperly transferred to the Department of Public Works to use for bulk trash pickup and other services instead, leaving the commission hamstrung.

“The last time the city actually had an anti-litter campaign was back in the 1980s,” Robins says, and more education is desperately needed. In a single cleanup, volunteers can pull 16 bags of garbage from the river rocks off 22nd Street, she says. Two weeks later, they’ll find the same amount of trash. “That’s heartbreaking.”

Here’s what Robins would like to see:
—An anti-litter campaign that relies on positive peer pressure, instead of public shaming, to encourage people to pick up their own and others’ trash.
—Increased enforcement of littering laws.
—More people leading RVA Clean Sweep’s volunteer efforts.
—Education for park users about how litter harms the environment, she says, and “how litter harms our souls.”

Eventually, she says, she’d love for the city to make Clean Sweep an official program with a part-time coordinator.

Until then, it’ll be in volunteers’ hands. The James River Association provides collection kits — bags, gloves and grabbers — and coordinates trash-bag pickup for any group that wants to organize its own effort. Popular areas such as Belle Isle and Brown’s Island already have robust cleanup efforts, says Ben Hawkins, the association’s volunteer coordinator, so he suggests people target more remote party spots. At Texas Beach, he says, “I can fill a 50-gallon trash bag by myself, in an hour, almost every time I go.”

At Ancarrow’s Landing last week, volunteers stuffed 16 garbage bags in an hour and a half. As they left around sunset, the Pick 4 lottery tickets were still strewn across the parking lot.