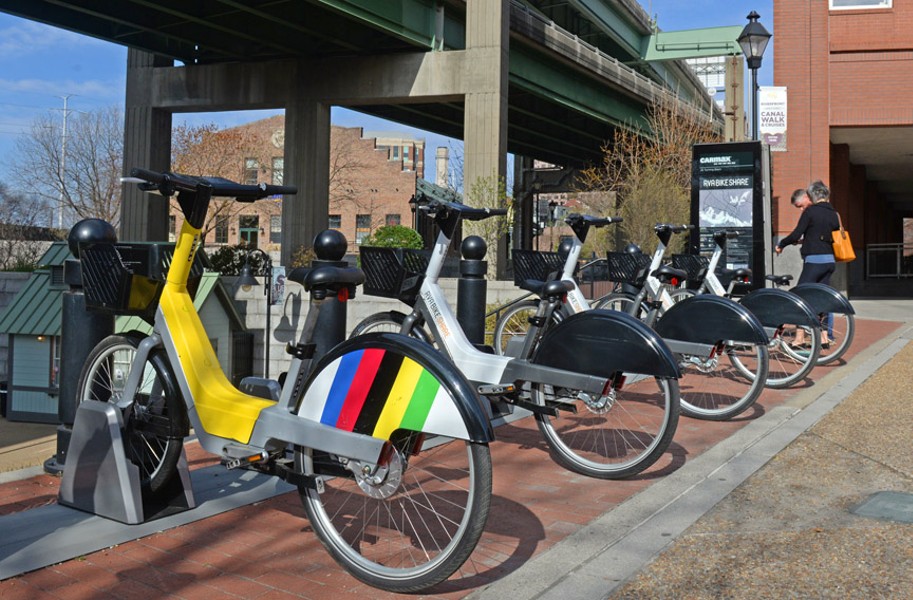 It's been nearly eight months since the launch of the city's new bikes-share program. Ridership was down during the unpredictable winter months, but now that spring is allegedly here, organizers are confident that the kiosks scattered throughout Richmond, where riders can rent and return eight-gear GPS-enabled bicycles, will see more visitors.

In response to the construction on Broad Street that's snarling traffic, pedestrian access and dozens of local businesses, Pulse has teamed with RVA Bike Share to offer a free month of rides to anyone who visits a participating business on Broad and picks up a card with a promo code.

"With the construction and that new line coming in, what we're looking to do is provide alternative transportation on Broad," says Braunyno Ayotte, business director of Bewegen Technologies, the contractor that manages the bike share's equipment operations. "We're also introducing users to the bike share and making sure that when Pulse does come on line, users are aware that they're able to complete their trip with RVA Bike Share."

"I don't see people whizzing by my window on the bikes," says Sally Bell's Kitchen owner Scott Jones, noting that the stack of cards with the promo code on the counter disappeared pretty quickly. "Granted, it's been winter, and I'm hoping people going to the museum will grab them."

The deal goes until April 30, and Ayotte says other bike-share promotions will be available to riders throughout the year.

Since launching last summer, RVA Bike Share has been used for more than 6,000 trips, totaling almost 12,000 ridden miles. Sixteen stations are scattered throughout the city, from Scott's Addition, down Broad through Virginia Commonwealth University, into downtown and Union Hill. Bikes also are stationed on Brown's Island and outside the CarMax Digital & Technology Innovation Center, giving riders easy access to the Canal Walk and Capital Trail. There are no stations south of the James, but the city's pedestrian, bicycle and trails coordinator, Jakob Helmboldt, says expansions are in the works.

"We have four awaiting lease agreements on noncity property, including VCU locations," he says. "And we are in the procurement process to get 20 additional stations and 220 more bikes."

Any locations in the South Side most likely will be limited to Manchester, Helmboldt says. The plan also includes upgrading all 440 bikes to have electric pedal assist.

"The placement of additional stations is based on multiple factors, the most significant being that stations that are isolated from the rest of the system tend to underperform," he says. "So that limits how far we can spread out the system. Once we have that basic area established, we then have to vet each location for the availability to accommodate the physical needs of the station."

As for safety and maintenance, Bewegen rotates the bikes daily, and riders can use the RVA Bike Share app to report any issues that need attention. Wearing protective gear isn't required, but Helmboldt notes that "use of a helmet is a good idea." S