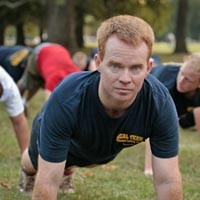 Rusty McGuire is driving his 7-year-old daughter, Mandy, to an Indian Princesses weekend camping trip at Pocahontas State Park. It's drizzling rain and several inches more are expected. But that doesn't faze McGuire, who loves challenges, the outdoors and children. “Yeah, it's going to be rainy all weekend,” he says, “but someone's bringing a tarp so we can have mud slides.”

Protective of youngsters, lawyer McGuire has developed a nationally recognized program to educate parents and prosecute sex offenders who use the Web to bait underage prey. He started the program at the state attorney general's office and took it further in Louisa County, where he serves as deputy commonwealth's attorney.

McGuire has prosecuted more than 50 Internet sex predators and sees it as a mission. “I had been deployed overseas in the Army and wanted to do something different rather than just a job,” he says. After 9/11, he served in Cuba and Iraq.

It's been a long haul for the one-time dropout from Henrico High School. He joined the Army at 17 and made sergeant at the unusual age of 19. At 21, he was at Virginia Military Institute and later studied law in Michigan before working as a prosecutor in Richmond.