At 20, Joel Erb is making big money, building an empire — and studying for finals. 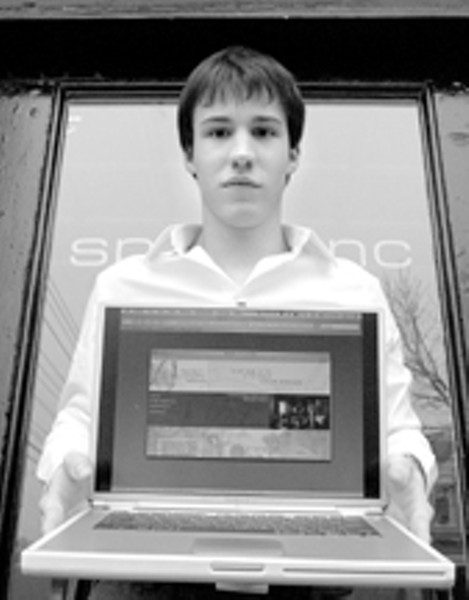 What were you doing at 14? Joel was working 11-hour days, selling his services to New York fashion houses such as Giorgio Armani and Calvin Klein. At 15, he taught the latest computer technology to professors and teachers — ones who specialized in computers. His cell phone rang in math class.

“To have a little boy from Richmond come up and show them something they haven’t seen really got them thinking,” Erb says, recalling the first trip to New York to meet with marketing executives. His uncle owns a limousine company and just so happened to be going to New York that week.

He remembers the harsh, big-city attitudes. One asked where his father was. Another wondered if he had hit puberty. Joel let it roll. “It was just too funny to see,” he says, now a seasoned 20-year-old. “It was like Richie Rich.”

It’s tempting to dismiss Joel as just another whiz kid, another skinny runt born with a computer mouse in his hand. Sure, companies are willing to pay big bucks to tap into the heads of media-savvy kids. But the stereotype doesn’t stick. Erb’s business acumen is light years ahead of where it should be. And unfortunately, he’s not annoying like most 20-year-olds who look 16 and make more money than you — a lot more money.

“He actually seems to have a fairly mature approach to business,” says Lee Baskerville, a local portrait and landscape painter who hired Erb to build a Web site and design business cards for him. Erb has a lawyer to draft contracts and an accountant to keep the books. When Bergdorf Goodman, an upscale Manhattan retailer, explained the company’s success was built on fabrics that you couldn’t touch and feel on the Internet, he created a special zoom function that gives browsers a microscopic view of the material.

“I figured he was like a nice young apprentice or something at the company,” he recalls thinking. “Then I found out he was the owner of the company. I was actually sort of intrigued by the whole thing at that point.”

Living with Erb “made life very interesting” says his mom, Linda Sue Erb. “Right down to Ralph Lauren being on the answering machine.” (Erb says Mom has a bad memory. It was actually Giorgio Armani who left the message.)

When Erb was 2, he took apart a broken toy train piece by piece. It had a transparent cover with colored gears inside. He fixed it and put it back together. As a child, he was also a gourmet cook — he got that from his mother — and an artist. He produced plays for the school and cooked elegant lunches for his teachers.

“He never walked,” his mother recalls. “He started climbing at 7 months and running.”

So busy was Erb that he didn’t have time for school. When he was a sophomore, he nearly dropped out to focus on his business. His high school, L.C. Bird in Chesterfield, however, contacted him about a new Internet program Chesterfield County wanted to test out. He could finish his final two years on his own time by taking the classes virtually, taking tests at a secure Web site. It was difficult at first, but Joel graduated with flying colors. He’s now a sophomore at the University of Richmond.

“In Joel’s case, it was perfect,” says Gabe Pascarella, assistant director of the coordinated studies program for Chesterfield County. Today, Pascarella says, the county has 300 students registered in online courses.

The business, however, took its toll. Erb started suffering from panic attacks. The business kept him up at all hours. The stress crippled him. “I had a mental breakdown,” he says. “I had allowed the business to grow so big. I had panic attacks every 15 seconds. Almost everything I started I lost.”

After Sept. 11, 2001 — Erb says he was inside the Twin Towers the day before — he hit the skids. The economy went south. He spent all his money. So he decided to go college. About a year later he was back in business.

His mother worries sometimes that he gets his priorities mixed up. “We’re disappointed that he’s chosen to put his profession first and foremost above all else in life,” she says. “Money is not what brings happiness. But he has to make his own decisions in life.”

Erb doesn’t like to talk about how much money he makes. He says his company grosses somewhere between six and seven figures a year. He has five employees, and he charges about $165 an hour, in line with the industry standard for Web design and marketing firms. And business is hopping again.

“In the past month and a half our business has tripled,” he says, adding that he’s already booked for the next six months. “And we don’t know why.”

He’s taking his mother’s cue, he says. He’s learning to have fun, and he’s hanging out with his new friends at UR and working a little less. “Money was never an object,” he says. “I love what I do.” S