An old carousel with history and heart lands at the Virginia Folklife Stage. 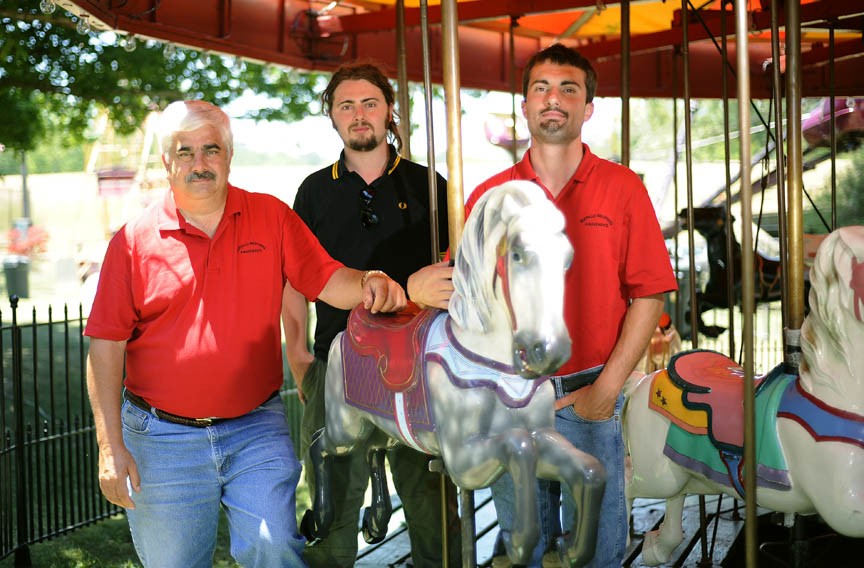 This wheel's been turnin' ... for quite some time now.

Visitors to the Virginia Folklife Traditional Crafts Area, located just off the junction of Tredegar Street and Brown's Island Way, have a unique chance to experience the oldest regularly touring carousel in the United States, a 1915 Spillman Engineering wooden model, with 16 elaborately painted horses. And yes, kids can still ride it.

The nearly century-old carousel comes courtesy of Buffalo Brothers Amusements, a small, family-run operation based in Staunton — which nicely fits this year's folk life theme, Virginia KinFolk: a Celebration of Family Folklife. The Harris family formed the company in 2007 with the goal of reviving the golden age of traveling carnivals.

Brothers Lee and Tommy Harris grew up on a small cattle farm in rural Rockbridge County near Buffalo Creek — hence the company name — which Lee, the elder brother at 28, also notes is a tribute to Buffalo Bill's Wild West Show.

"Growing up we had to learn to fix things ourselves, or it wouldn't get done," he says, taking a break from sculpting ornamental scenery boards for the ride. "Nothing is prefabricated on this carousel. I have to work around the clock on it, all the time. It's like working on the Golden Gate Bridge."

The Harris family bought the traveling carousel from a Staunton company, Taylor Amusements, which had been operating since the 1940s. It purchased the Spillman in the 1960s. As far as its history, Harris knows only that a company in Annapolis, which owned the carousel, had lost track of its origins. It was built in North Tonawanda, N.Y. "So it's probably stayed on the East Coast its whole life," Harris says.

The Spillman was in need of serious restoration when they got it.

"It was basically driftwood and had to be totally rebuilt," Harris says. His biggest challenge was getting the horses back in shape, which required carving and re-creating nearly all the horses. The original color scheme is retained whenever possible, he says, thanks in part to some old lead paint remaining beneath. The brothers also updated the electrical system so the initial load is gradually ramped up and onto a rebuilt drive mechanism.

It's serious work to break down the carousel and move it. "It takes a crew of five guys four or five hours," Harris says. The Buffalo Brothers tour this carousel an average of 10 times a year around the East Coast, mostly in the Shenandoah Valley. It's a true rarity in an age where there are few mom-and-pop carnival operations left, primarily because of the cost of insurance, operating and fuel expenses, and competition from large corporations.

"These rides still meet the safety specs of today and require state inspection," says Doug Bathke, trustee and curator of the Herschell Carrousel Factory Museum in North Tonawanda. "Usually these antique machines are broken up and sold at auction. We're always glad to hear they're still being used by someone who wants to present them to the world."

And the Harris brothers plan to continue to collecting vintage rides. They have more than 15 now, most in need of repair with the parts nearly impossible to find, Harris says. Buffalo Brothers hopes one day to open a stationary exhibit, but Harris acknowledges it probably would need to be in Roanoke, Charlottesville or the Richmond area. "That's on the 10-year plan," he says.

For now, it's enough to know that a few people will appreciate his labor of love.

"Kids don't care — you could spray paint a pony and the kid would still ride it," Harris says. "But this is a special ride. About five or 10 percent of people will stop and really look, realizing just what it is, that it's all wooden and very much out of the ordinary."