Sometimes an extra pair of hands you trust is the difference between achievement and failure.

Successful bars create social experiences, so it’s no surprise that the collaborations behind them often aren’t solo ventures. Here are a few dynamic duos in Richmond whose collective skill sets seem to work together like gin and tonic. Equal parts creative and calculated, these folks keep a handful of the city’s favorite watering holes up and running. Unlike the political realm, their pairings aren’t so much strategic as the byproduct of good old-fashioned happenstance. For all they have in common, they’re as unique as their respective spaces. 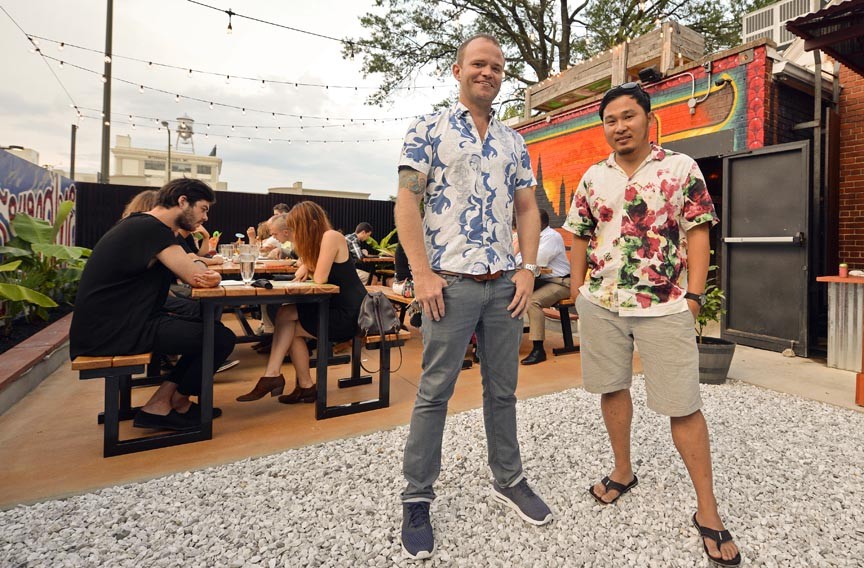 Brandon Pearson was a Carytown worker who loved saddling up to Mom Siam’s bar when he finished the day, where he fast became friends with Sabai co-owner Joe Kiatsuranon and his family, who are behind the successful restaurant.

“I wasn’t even that into food until I met his family,” Pearson says. “They showed me what that was, and then I even got into cocktails.”

Pearson has a background in construction and created the industrial-chic aesthetic of Sabai. From sturdy rustic benches to Edison bulb chandeliers, he crafted all of it by hand.

“I could make that, too,” Kiatsuranon says, “but he would change it, and I’d have to spend more money.” He laughs, and the two trade quips like grumpy old men in “The Muppet Show” balcony. You can tell there’s nothing but brotherly love between them.

Kiatsuranon brings the flavor to Sabai — literally. He gets into the spot in the wee hours to make signature sauces that leave foodies salivating and checks later to make sure all operations are good to go.

The two say no decision is made without the other, and that they’re always coming up with ideas — such as expansion. A speak-easy of sorts made out of a shipping container is becoming part of Sabai’s backyard, right next to the patio that just recently opened.

“I wanted to make the back karaoke, but he doesn’t like [karaoke],” Kiatsuranon says. “We were at En Su Boca and he jumped up in the chair screaming, ‘I’ve got an idea!’” Sorry karaoke fans, looks like you’ll have to claim another bar area instead.

“All three bars will have different drinks,” Pearson says. “It’s becoming a bit of an adult playground.” 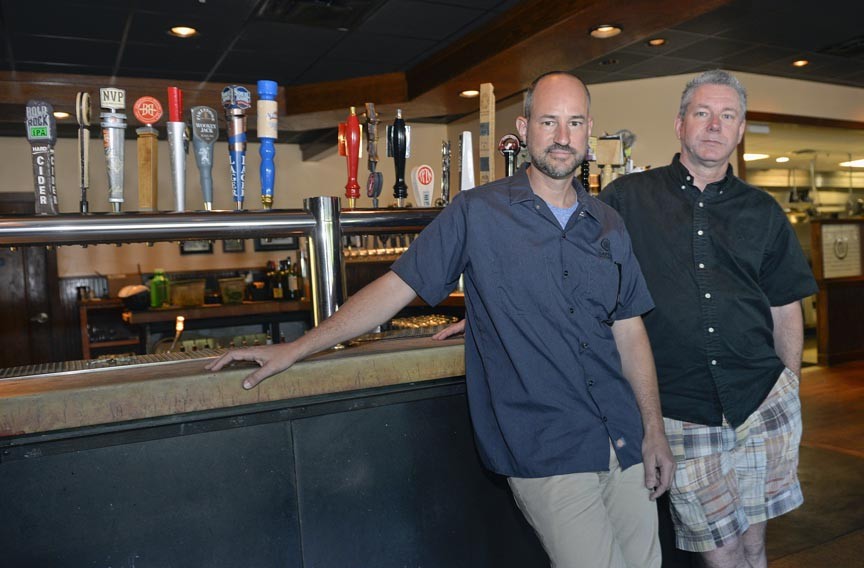 What happens when you pair a beer geek with a number cruncher? A Richmond-based, beer-focused restaurant, now with five locations.

Chris Holder and Matt Simmons met about 16 years ago while working at Legend Brewing Co. Simmons spotted a “For Lease” sign at what eventually became their downtown location. He snagged his beer-loving friend Chris Holder, and Mike and Linda Jones — the two are silent partners — to talk about making one of Richmond’s best beer bars happen.

And they did. Today, Simmons handles the restaurant operations side of things, while the more social Holder handles the beer stuff.

“He’s way smarter than I am,” Holder says, laughing. “We’re very different, but that’s the key to our success.” These days, they may not see each other more than once a week despite adjacent offices, but they make all decisions together. “We always come at things from different perspectives and we’re both comfortable enough to meet in the middle.”

One of the most critical moments in their partnership thus far was getting through a memorable roof collapse at their Fredericksburg spot.

“It was amazing the damage that was done,” Simmons says, “but we both stayed pretty levelheaded. If one couldn’t make it to an important meeting, the other one did.”

Holder says that sometimes they’re at their most useful when helping staff on a wild night. “If they’re getting hammered by something,” he says, “our best role is to wash dishes and glasses. We smile, just smile. Helping like that feels great to us.” 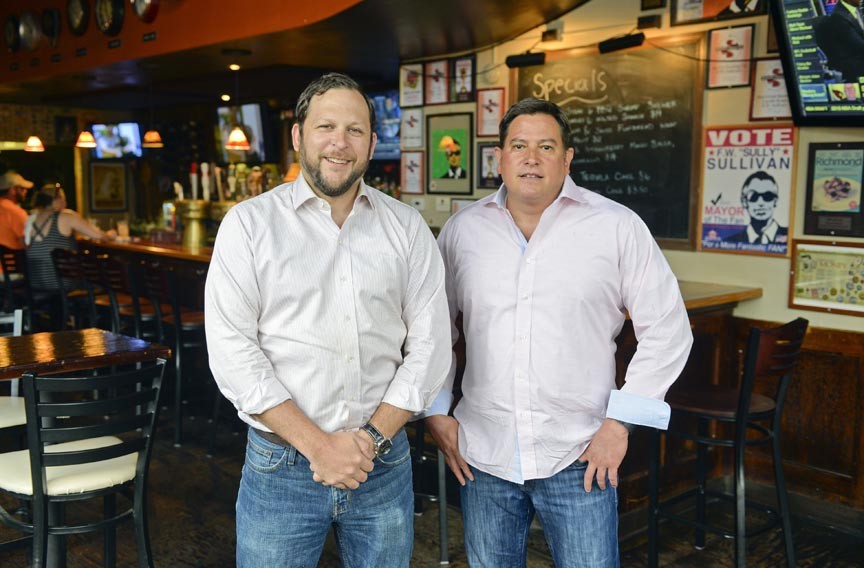 By day, they hold down 9-to-5 gigs. Hayden Fisher practices law while his partner in crime, Jake Crocker, acts as creative director for advertising agency Louder Than Digital. But when it comes to nights and weekends, it’s all about a Fan staple, F.W. Sullivan’s.

The two met about 10 years ago while involved in a young professionals’ organization called Opus, an arm of the Richmond Performing Arts Foundation. Crocker says that they shared a similar vision for Opus — both wanted to take it in a new direction. That iteration of the organization fared well until 2009 as the economy tanked.

Other ventures were afoot. The duo began getting excited about an idea for a restaurant that would connect creatives, professionals and nonprofit groups that needed a place to meet. Enter Sully’s. Today, they continue with their mission to unite folks.

“People have no idea how many marriages we’ve created,” Fisher says.

The business isn’t for the weak-hearted, the pair acknowledges. Crises are as varied as pipes bursting after snowstorms and the usual bar patron shenanigans. They’ve been through a lot.

“Sometimes we just look at each other like, ‘OK, that just happened,’” Crocker says. He adds that it’s good to have someone around with a sharp eye for legal matters, and Fisher admires Crocker’s tenacity and media savvy.

“Even when he’s wrong, he’s passionate,” Fisher says. He adds, laughing, “We do fight like brothers sometimes.”

One of their more memorable spats was about Christmas specials. Crocker “is not a holiday person,” according to Fisher. “We were talking about what to do and somehow reindeer came up. The next thing you know we weren’t arguing [anymore] and were ordering caribou filets from Alaska for a Rudolph special,” he says.

“Sometimes conflict lends itself to a new idea.”