Rum and Ravioli: Liquors created by pasta-makers are available at Bombolini 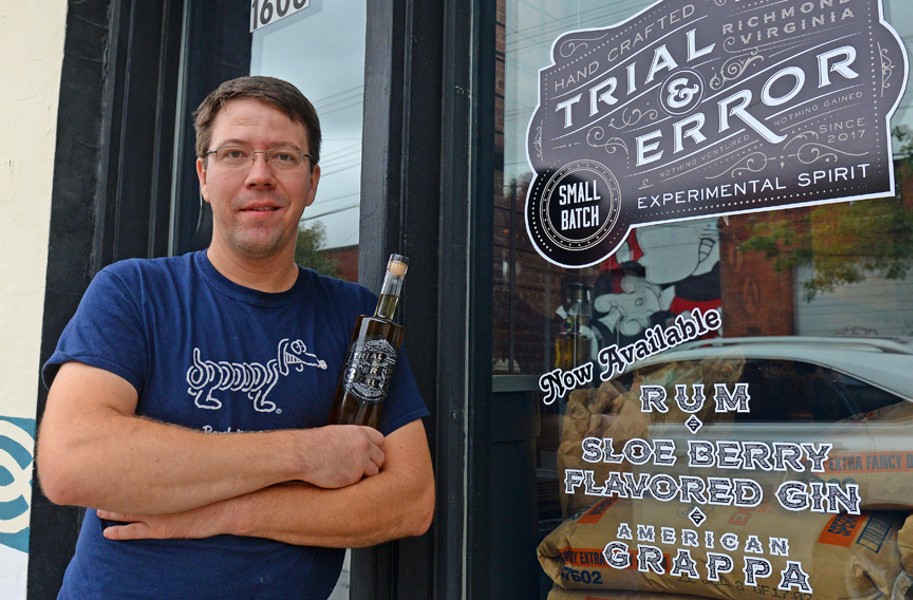 John Kreckman originally wanted to make beer. A graduate of Johnson and Wales University with a degree in culinary arts, the co-owner of Bombolini Pasta considered utilizing the back of the Fan shop as a small brewery to complement the selection of pastas and sandwiches. Rather than enter an already saturated beer market, he took the liquor route.

In the spring, Kreckman and his wife and business partner Lolita quietly launched Trial and Error, a small-batch distillery under the same roof as the freshly-made pastas and sauces that Bombolini is known for. Now 750-milliliter bottles of rum are available for purchase in the shop, along with more unusual choices like a sloe berry gin, which Kreckman describes as similar to blueberry but slightly more sour. The dark rum, aged in barrels from A. Smith Bowman Distillery in Fredericksburg, "leans very heavy toward the bourbon side," Kreckman says, with the sweetness of rum but a cleaner, softer finish than other rums. A recently distilled watermelon rum is bottled and ready to go, and it'll be available for purchase as soon as the Virginia Department of Alcoholic Beverage Control approves the labels.

Kreckman notes that while the space is "not a bar," tastings are available at the little counter in the back. And despite the hassle of rezoning the property to allow for spirits to be distilled and sold on-site, it seems that pasta and booze in the same space do well for one another.

You won't find any Trial and Error bottles in stores other than Bombolini yet, but the silver and gold rums are available on the Virginia ABC website. As for future products? Kreckman says one of the benefits of a small still is flexibility, and you can expect something new every month or so. He's currently working on a classic gin and a fig-and-pear cordial. S