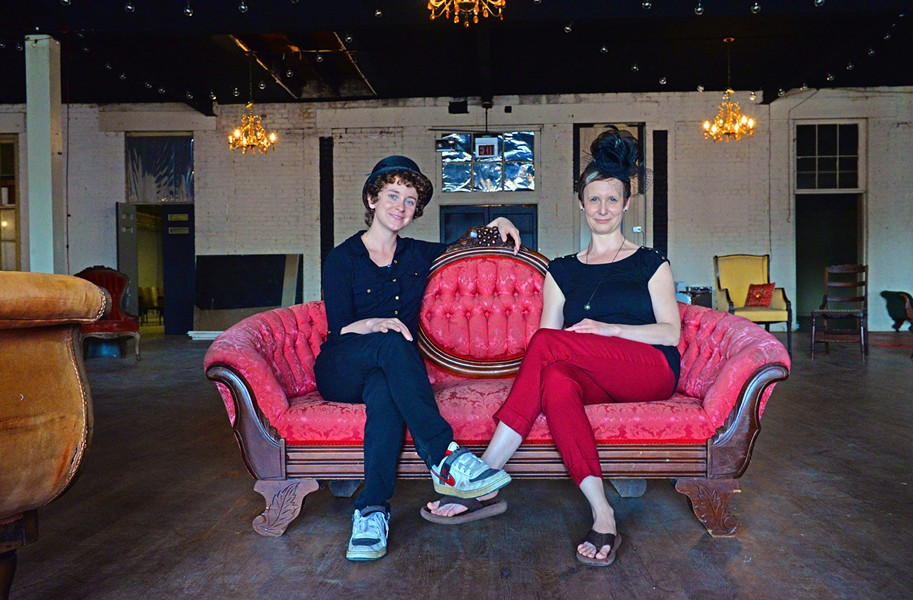 Scott Elmquist Organizers Charli Brissey and Courtney Harris are briefly taking over the Hofheimer Building in Scott’s Addition, home to the future Peter Chang restaurant, and turning it into a gallery and party space.

With her short hair and masculine dress, Romaine Brooks cut a striking figure in the 1920s. In her paintings, the American was even more unconventional: At a time when cubism and fauvism were en vogue, Brooks preferred the aesthetic style of James McNeill Whistler. Even her choice of subject was different, painting women in androgynous or masculine garb.

It’s a reminder of this iconic woman that the event 20 Rue Jacob hopes to impart this weekend. Taking over the exotic Hofheimer Building in Scott’s Addition, a crew of dancers, painters, performers, filmmakers and sculptors will re-create a lesbian salon in 1920s Paris.

“We wanted to sort of exist in this space between a gallery and a party, or something typical of these salons from the 1920s,” says artist Charli Brissey, one of the performance’s organizers.

As would fit Brooks’ unconventional style, the event will be an immersive theater experience, meaning that audience members are invited to walk through the space and interact with performers as though they were guests of the salon. Attendees are encouraged to dress in 1920s attire and can partake in food, drink and dance.

The event came about after Brissey’s collaborator Courtney Harris saw some of Brooks’ work on display in Washington. The duo began researching the period, and how these salons were a space for sexual minorities to be themselves.

“At the time it was a really big deal to have parties,” Brissey says. “We have so much more freedom now as queer-identified individuals, or people who don’t necessarily identify as one or another gender.”

While referencing the period, Harris says the event isn’t intended to be entirely historically accurate.

“The re-creation of these spaces is meant to be looked at through a contemporary lens,” says Harris, an assistant professor of dance at Virginia Commonwealth University. “It’s bringing in the 1920s, but we’re asking contemporary questions.”

For the event, designer Nicole Bauguss will morph the Eastern-themed Hofheimer building into a Parisian salon. Bauguss previously collaborated with Harris on queer-centric works, including an adaptation of the ballet “La Sylphide.”

“Courtney and I have explored a lot of gender identity in terms of performance work, in terms of considering queer spaces and different presentations of queer work,” says Bauguss, who is based near Asheville, North Carolina. Bauguss says 20 Rue Jacob will be an event unlike what the city may have previously seen.

“Richmond, while it’s a fairly progressive city for being Southern, there still aren’t a lot of exclusively queer-based events that aren’t Pride or aren’t bars,” Bauguss says.

Eventually, the show’s creators hope to take the performance to other cities.

For Brissey, the 20 Rue Jacob is intended to acknowledge the role that earlier pioneers of gender and sexual orientation played in making Western society a more open place.

“Romaine Brooks was painting portraits of these really transgressive, mostly women, who were transgressing gender norms of that time through their clothing and their parties,” Brissey says. “It wasn’t always like this, so it’s important to research how these women have made it easier for us to live our lives as we’d like to.” S