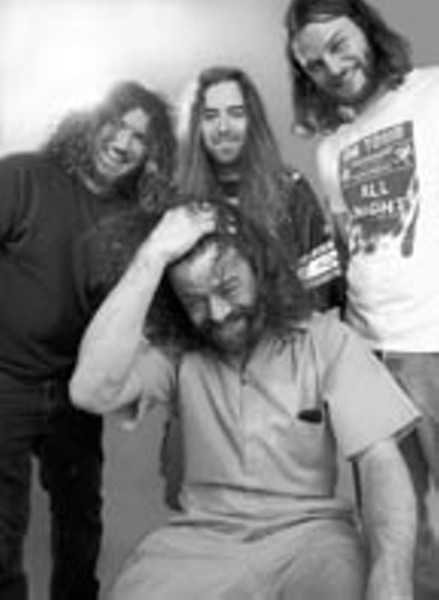 Since 1999, RPG has honed its no-frills balled fist of sound into a seriously '70s rock update that recalls the era's pioneering work of the Stooges, MC5 and Grand Funk. All that hard work is starting to pay off. With appearances at the SXSW festival, a national release of their debut, "Full Time," on the Arclight Records label in Austin, Texas, and a steady diet of touring that will cover North America and Japan over the next year, the band may finally be within reach of the simple dream of being able to make a living playing music.

As usually happens, band members fall in love and have children, which isn't conducive to life in a band. Longtime bassist Tony Brown recently left the tightly knit group to provide for his wife and child. The parting was stressful though amicable and after trying out several candidates to fill the position, 26-year-old Ryan Shade — who the group has taken to calling "The Face" for his good looks — has settled in as the permanent replacement.

Life in a band is not for the faint of heart. RPG has maintained its existence despite constantly skirting the edge of financial ruin, total indifference and, now, the demands of family. It's a constant juggling act of bartending gigs, short-order line cooking, freelance metal refinishing and construction work that has sustained the band over the years. The fiercely independent group has persevered where lesser bands would have thrown in the towel, but RPG isn't your typical band. They are workhorses, and this simple-minded determination to rock is what sustains them.

This strong work ethic will no doubt be passed on to their children. Let's just hope they have earplugs. — Chris Bopst

RPG's new album, "Full Time," includes a DVD. They're on tour and return for a local show June 9 at Alley Katz with Alabama Thunderpussy and Dixie Witch. www.rpgva.com