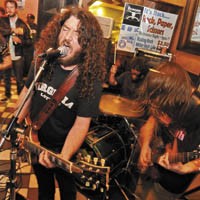 Local rockers RPG are all about having a good time. They're known for blistering three-chord bar rock, the kind of sweaty music that sounds better with each passing drink. But that doesn't mean they take the recording process for granted. In fact they just spent more than two years making their next album, "Worth the Weight," due out by fall.