Ellwood Thompson’s restored headquarters embraces modernism in a city once shackled by the aesthetic pull of Colonial Williamsburg.

At the near West End intersection where Thompson and Floyd avenues converge with an Interstate 195 off-ramp, there's a curious-looking building that's easy to miss but hard to forget.

While this round, single-story, concrete block structure of 1954 is unmistakably modernistic, from the street it exudes a medieval, castlelike ambiance with austere walls, lack of windows and sturdy mahogany double doors.

Upon entering the 2,700 square foot building, however, it's apparent this gem springs from the early Sputnik era, when many modern American architects espoused light, efficiency and connection to nature.

Largely unchanged is the distinctive almond-shaped reception area. But where three translucent domes worthy of "The Jetsons" still channel daylight from above, the shallow pool has been drained and carpeted-over in a knotty weave in shades of blue to suggest rippling water. The original, built-in, elongated bench has new cushions. Nearby is furniture from such esteemed midcentury modern designers as Fritz Hansen, a Danish company, and Knoll. There is even a custom coffee table, reflecting the curve of the room, which was crafted by William H. Higgins Jr. He was the physician who engaged Deigert & Yerkes & Associates, a Washington firm, to design the building and thus trail-blazingly embraced architectural modernism in a city shackled by the aesthetic pull of Colonial Williamsburg.

A welcome addition to the restored lobby is a commissioned, large, five-panel mural painted by Emily Herr, a Richmond artist. Although abstract, closer observation reveals a cornucopia of farm and food imagery.

The medical building's genesis reflected the spirit of our city's post World War II westward expansion. Higgins' practice was housed downtown in the Medical Arts Building (now converted to offices and apartments) when he decided to follow his patients to the suburbs. The site his practice purchased was in a transitional zone that linked a residential neighborhood with commercial streets that would become Carytown.

Higgins was a friend of Leslie Cheek, the director of the Virginia Museum of Fine Arts in 1954 and an arbiter of taste locally. It was Cheek, a 1935 graduate of the Yale School of Art and Architecture, who suggested his classmate, David N. Yerkes (1911-2011), to design the medical building. At the time Yerkes' firm was promoting itself as "communications architects," having designed numerous radio studios coast to coast. The medical building was in scale with many of those broadcasting facilities. But where station call letters were usually melded into the facades, no signifier broadcasted the purpose of Yerkes' modest, but distinctive building at Thompson and Floyd. Higgins and Stuart Ragland, Jr., his partner in medicine, may have eschewed the colonial revival, but the building they commissioned was as discreet as it was top-drawer.

What was radical about the structure for its time was, well, its roundness. It predated by a decade a memorable string of round structures built here during the 1960s. Demolished, but not forgotten, are the Lawrence Chrysler-Plymouth dealership on West Broad at Staples Mill Road, with its distinctive scalloped roof — a scaled down version of University Hall in Charlottesville; the Marcellus Wright & Son Architects-designed Larrick Student Center at Virginia Commonwealth University, built in 1961 to house the Civil War Centennial Center; and Mosby Elementary in Church Hill and Manchester High School in Chesterfield County.

Happily, two round buildings that reflect the flying-saucerlike trend of the times remain — the delightful aluminized Markel Building at Willow Lawn designed by architect Haigh Jamgochian and the Richmond Coliseum, for which the death bell may have begun to toll. 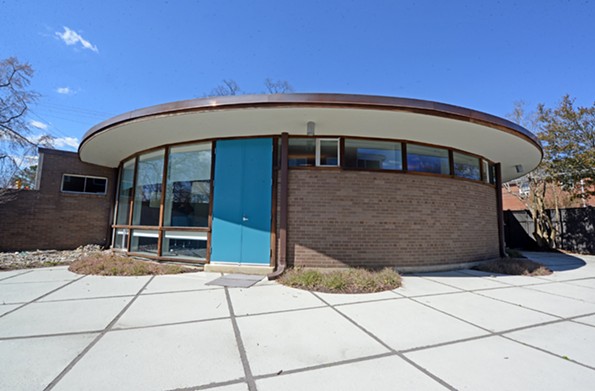 Round buildings have been considered an efficient footprint for a variety of building types since ancient Rome: Consider the Pantheon. In modern times Frank Lloyd Wright used the form as the point of departure for dozens of projects throughout his storied career. Consider his Johnson Wax Company and buildings at Florida Southern College, whose circular forms were widely publicized while Yerkes was in architecture school. And Wright's plans for the glorious Guggenheim Museum — essentially a spiral within a circle — were being finalized in the early 1950s as Yerkes began designing his Richmond medical building.

Yerkes' decorative concrete squares are also Wright-inspired elements that date to the latter's cast-block, Mayan-influenced California houses. Another Wright influence is evident in how Yerkes gave the street the cold shoulder, but opened up his building in the rear with expansive glass windows to an enclosed and landscaped courtyard — Wright's and Yerkes' embrace of nature was an essential factor in their designs.

But since we live and work in a world calibrated for spaces that embrace right angles, the medical building was neither inexpensive to build nor for Ellwood Thompson's to restore. It took a visionary to see the possibilities of saving this building. Kudos go to Rick Hood, a co-founder of the grocery store who was once a practicing architect, for seeing how this building, near the store, could serve his growing company. In addition to Parks, the talented the team who resuscitated the building were J.A. Heisler Construction, landscape architect Drew Harrigan of Four Winds Design, preservation consultant Mimi Sadler, and project manager M. Becky Boestfleisch.

At a time when many midcentury landmarks remain underappreciated, three cheers for Ellwood Thompson's. The grocer saw fit to connect the dots between a former medical building and its own mission to promote the health and wellness of customers, as well as the environmental soundness of embracing and rescuing an architectural treasure. S