RVA Black Farmers Market celebrates makers and growers from Richmond and beyond.

It’s the original startup, these homegrown markets, with talented bakers and growers, makers and creatives, taking time out of their busy schedules to present their wares to the world in hopes that their passion project will become a full-time endeavor.

Two hours after the first marketgoers arrive, several vendors are already sold out. Market founder Navi Johnson flits around, taking pictures of Smoking Ice chef Earl Lee manning the grill, and of local farmer Kyle Epps explaining the source of his zephyr squash and passion flowers. It’s a vibrant scene, masks and all.

“Even though these are bad times, this shows our survival techniques – we are resilient,” Johnson says.

The global pandemic has only highlighted this gutting and this question of what food sovereignty means for the Black community.

“I live in Church Hill. Before the Market at 25th, a lot of people in my community would go to gas stations to get food,” Johnson says. “Seeing us start to grow our own food helps combat this situation.”

As Johnson watched her mother hone her green thumb this spring, as she witnessed the riots and protests and shutting down of stores, she decided she would create her own hub of happiness, a center of celebration.

“In our community we can take care of each, and none of us will go hungry.”

A self-described lyricist, writer and entertainer, Johnson launched the RVA Black Farmers Market on Saturday, Aug. 15. It will run the third Saturday of every month through November, with more than two dozen vendors convening at the parking lot of the Way of the Lord Fellowship from 9 a.m. to 2 p.m.

In the past decade, farmers markets cropping up in neighborhoods abutting busy U.S. cities were par for the course. They would most often feature white makers and growers, and the more popular the market became, the more expensive it was to secure a coveted vendor slot.

Since then, according to Abels, there have been Black maker- and grower-focused markets in only a handful of states: Arkansas, Mississippi, North Carolina and the Old Dominion. She cites Johnson’s market as the Virginia example.

“I love being here,” Johnson says. “I’m from the East End, I’ve always loved Richmond, I have an undying love for the city and I want it to be a prominent destination. I believe I can be a part of that in a small way.”

Perhaps unwittingly, Johnson has curated a platform that even in 2020 is a rarity: a place devoted to riches produced by the Black community, from experienced entrepreneurs to brand new up-and-comers. Johnson’s market holds space for a variety of vendors, from a Charlottesville-based, family-run business hawking alkaline vegan products, to Richmond-based bakers spending every free hour they have icing hundreds of cupcakes. The market is a sorely needed love fest for the country’s oft forsaken creators.

One of those creators is web developer and market vendor Sherrell Satterthwaite, who is “working on the idea of creating an environment of self-care and self-love,” she says.

Satterthwaite, with the help of her creative brother, illustrates coloring books that promote positive affirmation. Together they started self-publishing the “I Love Me Coloring Book” about a year ago, and so far have four versions of the book for girls, boys, men and women. She says the idea to pursue a coloring book came from her own experience as a graphic designer, as well as her journey with oh-so-cathartic color therapy. She’s sold out of all her books at both Blair Street markets, so arrive early to score your own, or visit her website to order in bulk.

Lana Smith of Lana Luvs Confections says Johnson’s market was her first ever, although she’s been baking a while.

“I’m one of those people where anything I love to eat, I want to learn to make it myself,” Smith says. After some extensive research and development – and a bit of recipe tweaking – Smith’s original lemon bar recipe may have to be patented one day. 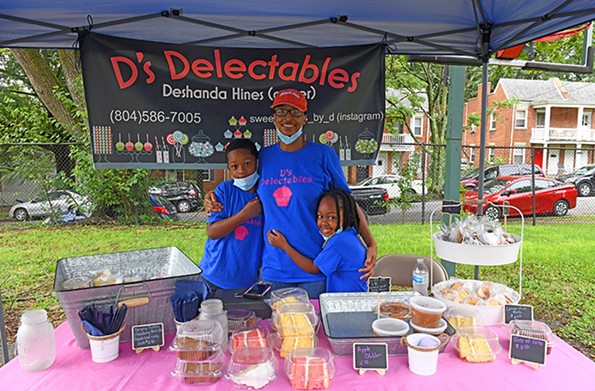 “My son and I tried so many versions of the recipe our tongues were raw [from the lemon zest],” Smith laughs. Also keep an eye out for French patisserie-inspired treats such as éclairs and macarons to make an appearance at upcoming markets.

Like any market worth its salt, RVA Black Farmers Market has hot and ready food for hungry shoppers. A recent offering – the future food lineup will be announced – included wings and fries from Smoking Ice Catering’s Earl Lee.

Lee says he fell in love with cooking at an early age – he’s currently working a full-time restaurant job while running his catering operation on the side. With events postponed or canceled due to the coronavirus, Lee says he’s been focusing on his meal-prep offerings, specializing in “anything that came out of the smoker,” plus healthy-ish dishes like smoked meatballs over spaghetti squash. 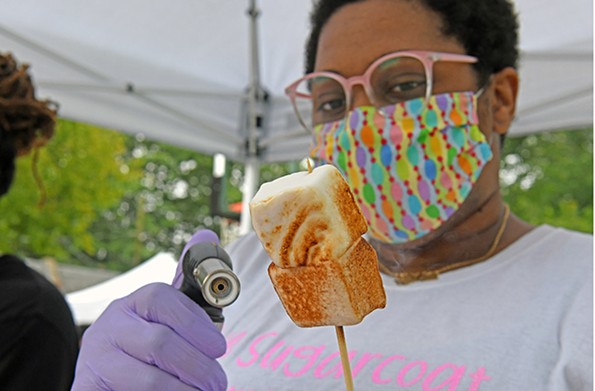 Also an avid gardener, Lee, like Johnson, believes in the powerful self-reliance of folks growing their own food.

“I want to teach people: You can grow things, you can easily grow tomatoes or cucumbers,” Lee says. “One thing you can grow is one less thing you have to go to the grocery for. It’s farm to table, not farm to Kroger to table.”

About an hour outside of Richmond, a market vendor and prolific farmer named Juniper tends to the 21-acre Maroon Grove Freedom Farm. The mission of Maroon Grove is to “provide accessible medicine to QTBIPOC [queer, trans, Black, indigenous and people of color] communities” and to help them “reclaim the land.”

Juniper, a Varina native and third-generation grower, is living on the Waverly farm full-time and hopes to focus growing efforts on herbal medicine – think tulsi, motherwort and camomile – in addition to fruits the soil is producing like Oaxacan green dent corn and fat, yellow squash.

After attending the Soul Fire Farm immersion program, Juniper came away wanting to pursue work in the field of land reclamation.

“My dad started working on a tobacco farm when he was 12,” Juniper says.

In just a few short months –Maroon Grove was founded in April – Juniper has already garnered more than 3,500 followers on Instagram and has successfully turned over a number of plots on the farm. 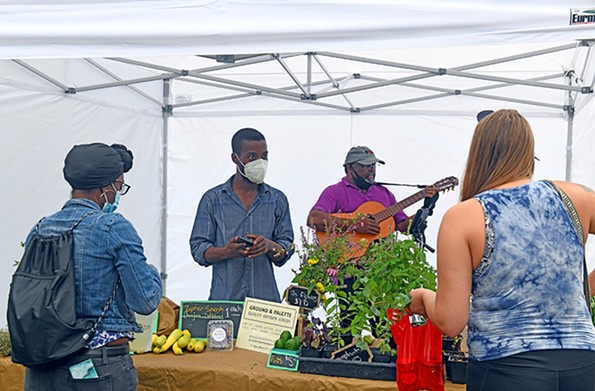 “I’m such a low-key person, I’ve been thinking about how to be more active, how to market, to create a website,” Juniper notes, hoping the farmers market will help them get the word out about Maroon Grove, though that’s not their primary focus.

“I’ve already turned over one plot and donated most of that to MAD RVA [Mutual Aid Disaster Relief Richmond]. Next year, I’ll turn over an even bigger plot for herbal medicine,” Juniper says.  “I’m so driven to help heal people in the community.”