Rooms with Views: A Survey of Quirk Hotel’s Expectation-Bending Art 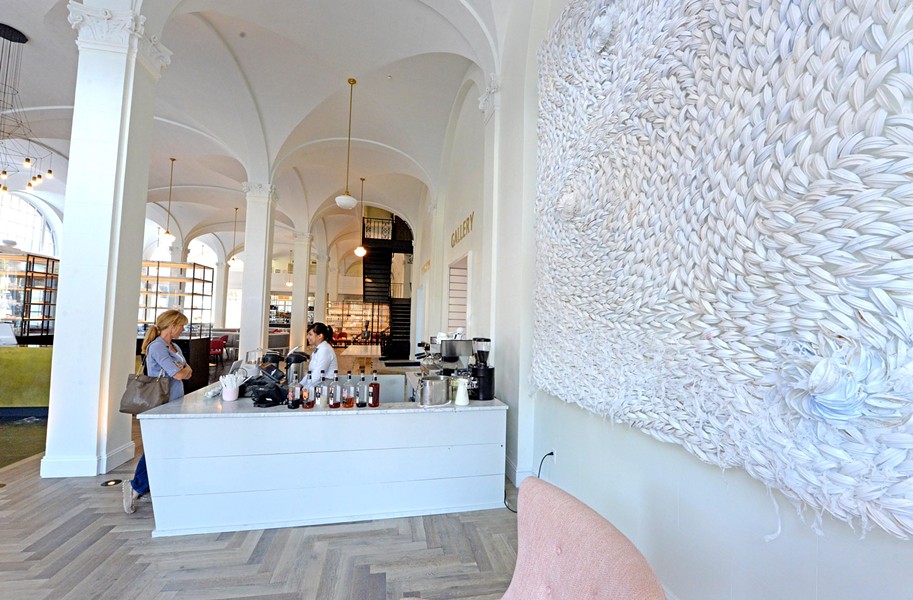 Scott Elmquist Inside the front door is a coffee bar with a backdrop featuring local artist Susie Ganch’s massive display of discarded coffee cup lids from Richmond’s streets. Ganch’s work, which often deals with issues of consumption, has been shown nationally and internationally.

Artists seem to take perverse pleasure in messing with people’s expectations. Breaking down gallery walls, literally or conceptually, is a good example.

Anselm Kiefer says he deliberately creates floor-to-ceiling paintings, so spectators can’t imagine his pieces hanging over their sofas. Philippe Parreno likes to project a film of hypnotized sleepwalkers on gallery walls, to reflect the aimlessness of visitors.

Quirk Hotel, which opened last month at 201 W. Broad St., might be considered part of this mischievous wave. It’s filled with pieces by local artists who have thrived in the holy context of galleries. Guests now are encouraged to enjoy mundane activities, such as getting dressed and brushing teeth, in the presence of such conceptual art.

The challenge will be serving serious art lovers while appealing to everyday travelers who want to mix it up. Helpfully, the hotel places pieces in a variety of contexts, allowing guests to be both thoughtful and irreverent around art.

“With this project, we really want to put our money where our mouth is,” says Katie Ukrop, who founded the hotel with her husband, Ted. “We want to prominently display the art of people we consider good friends and accomplished artists.”

She’s standing beneath a piece by Sean Donlon, situated in the lobby’s tea nook. From a distance, the piece looks like a cold, esoteric sculpture that could’ve been made by Dale Chihuly. Upon being seated at a nearby table, guests will see that the mass of tentacles actually is a collection of blown glass teakettles with elongated spouts and handles. It’s a mishmash fit for a Mad Hatter tea party.

A giant quilt by the cafe counter offers another visual illusion. Visitors often think Susie Ganch’s creation is woven with feathers, Ukrop says. But while placing an order at the counter, they look up to realize the quilt is made of plastic coffee lids. Ganch gathered the discarded lids from Richmond’s streets.

Hijinks continue in the public bathrooms below the lobby. Often, you can gauge how much money you’ll be spending at a place based on the quality and design of its bathrooms. In the men’s room you’ll find a single work from Rob Tarbell’s Spectacular Smoke Circus series. With luxurious charcoal strokes, the piece portrays a carny pirouetting on a circus horse. Ted Ukrop says Tarbell fans know the piece’s medium isn’t charcoal: In fact, it’s smoke from burned credit cards.

Exiting the bathrooms, there’s another Tarbell painting of men piling onto each other next to the elevator door. It’ll make for a good joke during the hotel’s busy season, when visitors are cramming in with luggage. Taking the elevator up, guests will see papier-mâché portraits by Sarah Hand at the beginning of each floor. Five portraits are of local humans dear to the hotel’s founders. The other two are of dogs, also styled with playful pomp.

“This was an interesting commission because I’m neither a portraitist nor a realist artist,” Hand says. “I settled on creating this whimsical greeting for arriving guests.”

Every room features a different décor, Katie Ukrop says. On the third floor, Harris Johnson’s primitive drawings float above pillows by Shelly Kleinthat that depict stick-figure animals. It appears to be a minimalist and conservative boutique theme, but Johnson also scribbles rude phrases on his canvases, such as, “Good Taste, Bad Taste, Good Luck.” This bit of self-awareness on Quirk Hotel’s part is refreshing, and Ukrop says it’s caused some staff members to scratch their heads.

“In another room, there’s a Johnson canvas that says, ‘Everything will not be OK,’ and it’s hanging over the bed,” Ukrop says, laughing, as construction workers run the halls. “We’ve had some people ask whether we really want to keep that up.”

But nothing could be any saucier than the hotel’s designated Hot Dog Room, where hot dog sculptures by Michael Pierce are posted above the headboard.

“As an artist, it was unusual taking this kind of venue into consideration, because you know people are just going to be passing by your art,” Hand says. “It was a challenge, but ultimately a lot of fun, and I think that’ll rub on off people.” S

Boutique Experiences
Quirk Hotel isn’t the only place in Richmond with arty lodgings. Even within the hotel’s immediate radius, there’s competition.

What is it: A college-themed franchise that will open sometime during “the spring semester” at 301 W. Franklin St., per the company’s website.

The takeaway: No word yet on whether there’ll be a “Dirt Woman Suite,” but let’s give hope a chance.

Residence Inn and Courtyard by Marriott

What is it: They opened doors Dec. 9 at 14th and Cary streets. This 137,000-square-foot complex sits on the former site of the Virginia State Capitol.

What kind of art: Baroque meets dada. At the Residence Inn, you’ll find a bizarre portrait gallery of colonial British officials whose faces are obscured with blobs of paint. Staffers say guests are sometimes confused by this gallery, but it’s supposed to signify rebellion against our former British overlords.

The takeaway: You might not see any art here that you’d want to take home. But maybe it’ll rev up your revolutionary spirit.

What is it: Hostelling International opened its Richmond location at 7 N. Second St. on Aug. 29. It features coed dorms, a shared kitchen and lockers.

The takeaway: Paintings schmaintings — who took my Stella Artois from the community fridge? 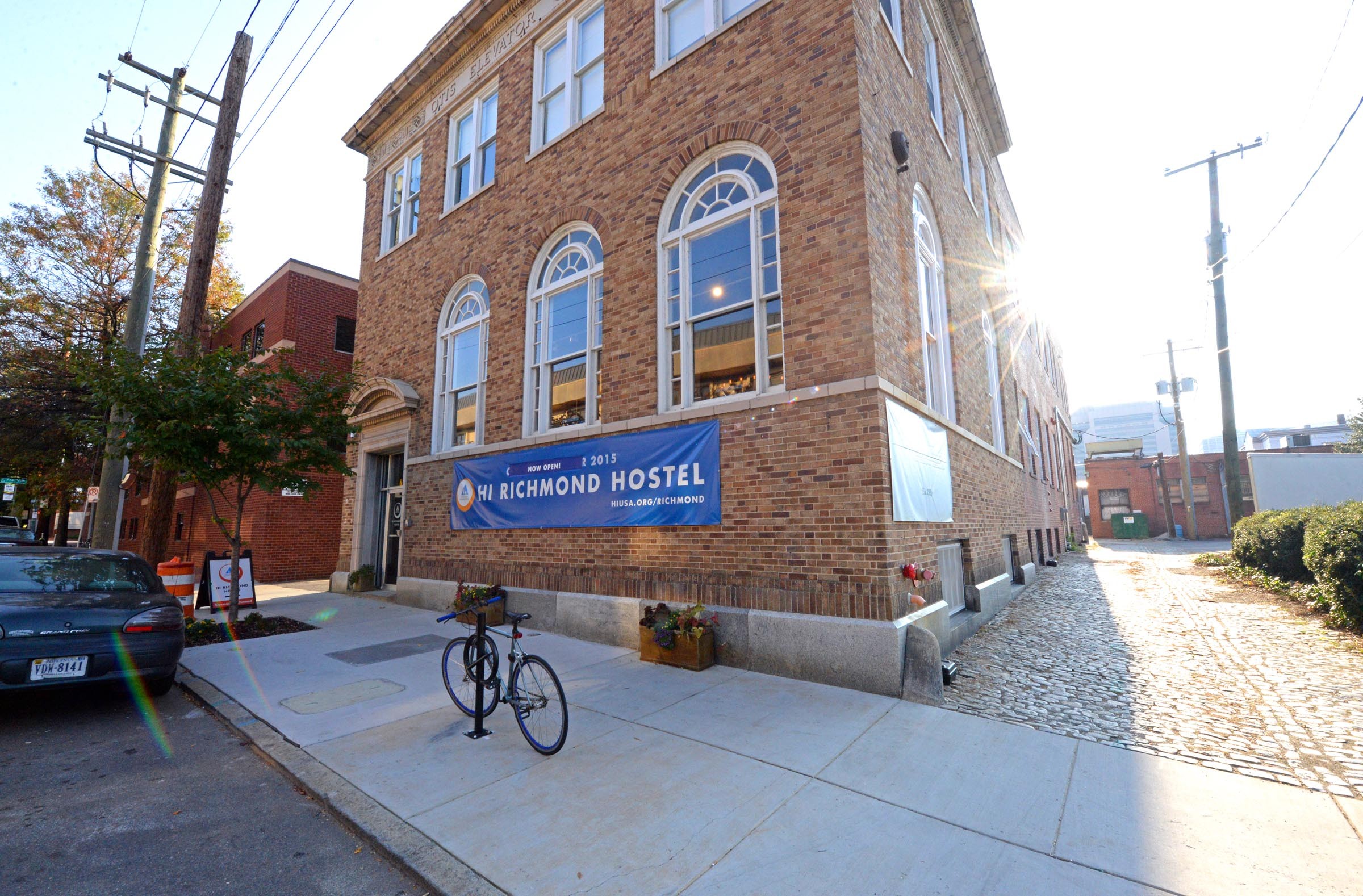