Rooms with a View

A Charlottesville designer channels American realist paintings and the 1920s and ’30s for an art collector’s penthouse.

Scott Elmquist The living room decor of a penthouse at the Prestwould, a condominium built in 1927 on West Franklin Street, channels the 1930s with walls painted a shade of blue-green popular in the era and a carpet and chandelier from the decade.

While many folks work remotely from home, Keith Kissee really works remotely. Pre-coronavirus, most weekdays he’d be traveling west observing a cattle ranch, holding a livestock auction in Missouri or consulting in some foreign place.

But shed him no tears.

Midafternoon on an icy weekday late last month, he was seated in his sumptuously appointed, art-filled penthouse condo at the Prestwould on West Franklin Street. While juggling business calls from faraway points such as South Dakota and Saskatchewan in Canada, he hardly notices the postcard-worthy vista beyond the huge, floor-to ceiling living room window. The iconic pyramid of the Virginia Commonwealth University College of Engineering, the Moorish-spiked Altria Theater, the gothic-laced Grace and Holy Trinity Church and the classical Cathedral of the Sacred Heart align to frame the quadrilateral Monroe Park and its crushed-stone sidewalks that slash across the lawns. 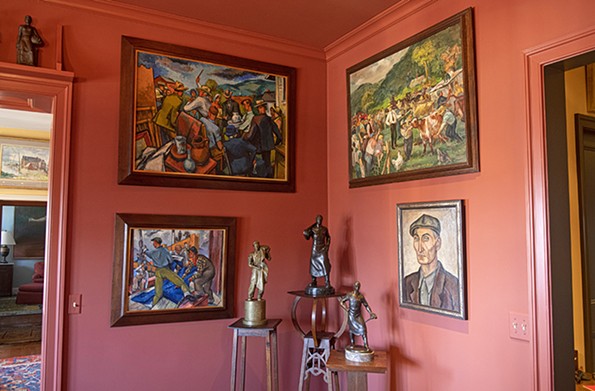 Kissee is a cattle breeder, seedstock consultant and broker. In the 40 years since graduating from Oklahoma State University, he has traveled the world importing and exporting various breeds of purebred cattle. But while missing being physically out in the field, he is surrounded by some 300 figurative paintings that capture the activities of rural America from the 1920s to the 1940s. As Congress debates a stimulus plan to address current economic woes, it’s timely that many pieces in his collection are related to the Works Progress Administration, a Great Depression-era federal relief program that hired artists to make art for schools, post offices and courthouses. Kissee’s collection also includes scenes of everyday urban life. In recent decades, social realism was often shunted. The haute art world favored abstract expressionism: works by Jackson Pollock, Helen Frankenthaler, Joan Mitchell, a VCU graduate, and others.

“I grew up in the Ozark, Missouri, house to which my grandfather took my grandmother when they were married,” Kissee told me earlier. “It sat perched on a big hill and had mantels and high ceilings.” Today, his 2,200-square-foot penthouse rests atop a big Tudor revival high point, the Harry Potteresque Prestwould, one of Richmond’s most posh residential addresses. Its crenellated, brick battlements along the roofline crown Kissee’s unit. The building was designed by Alfred Bossom, a British architect who came to the United States in 1904 to design steel framed high-rises. Other tall residences by the New York-based architect include VCU’s Johnson Hall dormitory and the financial district’s First National Bank apartments, formerly a ... well, you guessed it. 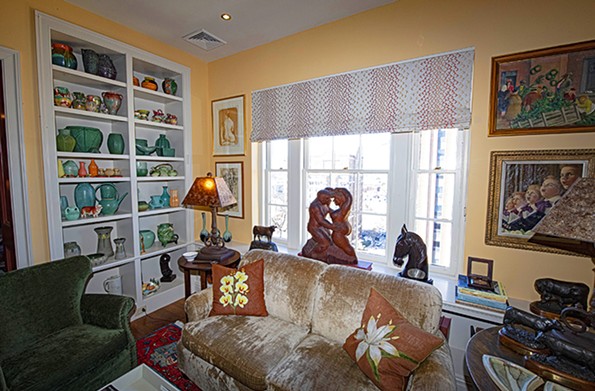 The Prestwould was built during flush times just before the Great Depression in 1929. Features included oak flooring, ample elevators and thick sheets of felt that were set between terra cotta walls to absorb sound. There’s no need to soft pedal Bartok or Gershwin at the grand piano! As the building has mellowed, its cachet has increased. And Kissee’s penthouse possesses a sound provenance. It was the longtime domicile of an irrepressible grande dame, the late Miriam Riggs Gay. She was the widow of Thomas B. Gay, an early partner in the Hunton Andrews Kurth law firm when it was Hunton, Williams, Gay, Powell, and Gibson. A resident for a quarter century, her Halloween parties are legendary.

That the interior of Kissee’s home reflects the 1920s and 1930s is due to both his striking art as well as collaboration with Charlottesville-based William A. Cobb Interior Design. “Keith has a highly specific aesthetic,” says Andy Cobb, the firm’s principal. “It relates to the period of his collection. The forms are bold, the colors are bright, and the scale is large.”

To pull things together Cobb chose historic 1930-era wall colors that are no longer on paint charts. For the living room, the apartment’s most dramatic space with 14-foot ceilings, he applied studio blue green, a Sherwin-Williams product. The floor is mostly covered by an impressive 1930 Iranian Kerman rug measuring 22 by 13 feet that once softened a Manhattan apartment. “The rug is not remotely in fashion at the moment,” Cobb admits. “I went back to a style that is not fashionable but is the correct period for the room. I didn’t want it to look trendy or forced.” He found a crystal chandelier that once hung in Palm Beach, Florida, for the center of the room. The dining room is painted picture gallery red, a Farrow and Ball paint that Cobb describes as a clay tone. In contrast, the combination den and kitchen is painted Hubbard squash, a deep yellow by Sherwin-Williams. 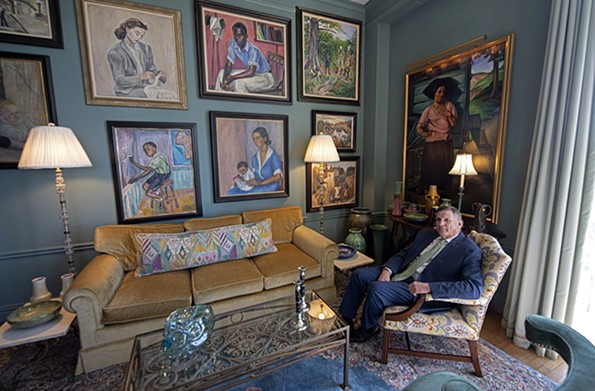 A take-away from Cobb for those of us who don’t have palatial spaces is that a similar approach to color and furnishings can be applied to designing more modest homes. “It’s pride of place but it’s not bending to the will of a place,” he says. “It’s honoring the history of a place whether 1920s, 1930s or 1960s. Each era has its own style and things will fall together.”

Cobb personally placed the paintings, most hung salon-style, one above another. “I spent a week just hanging the art when Keith was traveling,” he says.

That was maybe a good thing since Kissee is nothing if not particular: He and Cobb have collaborated for 35 years on various design projects. Some years ago, Kissee lived in Charlottesville where he managed a Limousin cattle breeding program for the Worrell family, of the former media empire. “Eugene Worrell had a huge influence on me,” Kissee says. “He collected major works of art and encouraged me to be highly focused on what I collected.”

The overall impact of the penthouse atop Monroe Park is impressive but not overwhelming due to the clear subject matter of each painting.

“We put a lot of art in every room. I wanted it to be like an exhibition at the Metropolitan Museum,” Cobb says. “But the decorating is pulled directly from the artworks. Part of the aesthetic feeling is that you’ve stepped into a painting.”