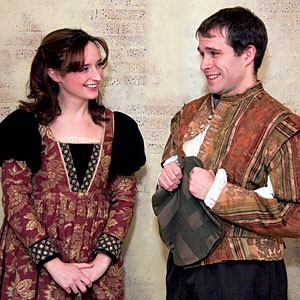 What more can be said about one of the most famous plays in the English language? Productions have set Shakespeare's best-known work in a myriad of conflicts, including the Civil War, apartheid, the Israeli-Palestinian conflict and the Cold War. It's been transformed into musicals about gangs in New York, turned into operas by Gounod and Bellini, and scored as symphonies by Tchaikovsky and Berlioz. So what new insights can we gather from Richmond Shakespeare's production?

Jeffrey Cole and Liz Blake White star as the infamous duo. Cole's performance stands out as one of the better parts of the show, and slight variations he adds to how Romeo is usually performed — such as waking up with a start after killing Tybalt — provide an interesting take on the character.

White's portrayal of Juliet as a giddy adolescent makes many important moments lose their points, such as the sobering time when Juliet realizes that Romeo is a Montague, and that their families are enemies. Joey Ibanez's performance as Mercutio has him writhing all over the ground in hysterics for no reason. While this interpretation of Mercutio as some sort of deranged madman is bold, it falls short in its execution.

Ever the comic presence, Thomas L. Cunningham's turn as the maternal Nurse offers a well-rounded performance, balancing hilarity and seriousness, all the while in drag. Also commanding the stage is Ryan Bechard as Tybalt. While Bechard may have one of the smaller roles, his anger and direction never seems out of place, and there's never any doubt about his motivation.

Grant Mudge's direction is all over the place. The adjustments between drama and comedy come at whiplash speed, and the show's overacting erases most of the characters' nuances. At certain points, like the scene in the fourth act after Juliet is presumed dead, the cast all begins yelling at once, creating a cacophony that drowns out the other important action in the scene.

The uncredited set design looks like something out of a high-school production, and the famous balcony scene is marred by the dread that the entire piece will tip over. Any time an actor moves, the large set shakes, and when Romeo descends from a rope ladder late in the play there's reason to fear not for the character's doom, but for the safety of the actors.

Gregg Lloyd's swashbuckling fight choreography is one of the few gems of this production, especially in the exciting fight to the death between Tybalt and Romeo. The costumes designed by Rebecca Cairns and Ann Hoskins are beautiful and fit the time period well.

Unlike Richmond Shakespeare's joint production of “The Winter's Tale” two months ago, this production has trouble getting off the ground. While the company's take on “Romeo and Juliet” should be commended for its energy, comprehension and playfulness with the material, it has plenty to iron out.  S