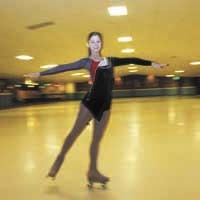 Laura Wright of Short Pump will travel to Taiwan with her coach, Cindy Schrader, this week to compete in the international roller-skating championships. But unlike her ice-skating sisters, Wright's competitive dreams must stop there.

Many untraditional sports have made their way into the Olympics during the past decade. Beach volleyball? Yes. Dirt biking? Yes. Even trampoline jumping. But rollerskating? No.

“It's very similar to the ice you see on TV,” says Schrader, who's been skating 46 of her 48 years. “They tend to be able to jump better than us. We have some creative, innovative spins they can't do.”

On Nov. 14, the Federation Internationale de Roller Sports will deliver a presentation to the International Olympic Committee in Switzerland making the case to be included in the 2016 summer games. Admittedly, it's first lobbying to include in-line skating, which would work on existing track-and-field courses.

The committee's decision will be announced next fall in Copenhagen.

Rugby, squash, golf and karate are among the other sports the Olympic committee is considering for 2016, says Richard Hawkins, executive director of USA Roller Sport in Lincoln, Neb. He ultimately wants to see the full gamut of roller sports compete at the Olympic level — artistic skating, speed skating, roller hockey and roller derby.

“Once you get one in the door,” Hawkins says, “hopefully it will be easier for the others to follow.”

Even if the sport's Olympic dreams are not realized, Hawkins takes satisfaction in the recent roller derby resurgence. Richmond has two leagues, the Richmond Derby Demons and the River City Rollergirls.

The boost came just in time. Disco gave the sport a big kick in the '70s, but before derby came back, roller sports were in decline as rinks closed.

If Wright doesn't win big in Taiwan, and 2016 doesn't materialize, does she see roller derby as a possible fallback?