Local moviemakers say tax incentives for films are a win for Virginia. 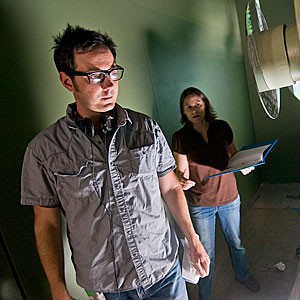 It's almost 3 p.m. on the penultimate day of filming for “The Projectionist.” The owner and producer of a local film company, the Branching, prepares to give a pep talk to crew members, all of whom are hand-picked for the project. Though Lucas Krost considers these technicians the best in the area, even the state, he's hired many of them at a steep discount; some have donated their time.

Krost says he feels a measure of guilt because his crew members aren't getting paid what they're worth. As the Virginia film industry has lost bid after bid for big-budget films, local filmmakers have struggled to — in Krost's words — “make do.”

“We used to have at least two or three big films a year that we could survive on,” Krost says. “First and foremost it's imperative that we get those bigger films in Virginia. That's what allows some film crews to stay. A lot of our crew is moving to Louisiana, Atlanta, New Mexico … where they get a lot of big projects.”

States that offer revamped film incentive packages have been reaping the benefits of Virginia's thinning entertainment business in recent years. Some — including New Mexico, North Carolina and Georgia — feature bundles of perks that offer production companies that film in their states as much as 30 percent in tax credits and grants.

But Gov. Bob McDonnell signed a measure June 14 providing income-tax credits to any film company with qualifying expenses of at least $250,000 if the movie is produced in Virginia. During a two-year period, $10 million worth of credits can be given. The credit legislation will work in tandem with a boosted Motion Picture Opportunity Fund, which grew from $200,000 to $2 million this year because of a budget amendment McDonnell requested. State Sen. L. Louise Lucas, D-Portsmouth, was the chief patron of the Senate's version of the law — the third year in a row she introduced similar legislation.

Stories elsewhere of similar, failed initiatives have tempered the debate. Michigan and Massachusetts are two states that have lost money by offering too much with their no-cap tax credits — up to 42 percent — and not getting enough in return. Ultimately Virginia took a conservative approach, which allows for production companies to make back 10 to 15 percent of their project budgets — 20 percent if they film in impoverished areas.

Opponents of the new legislation suggest that film production only supports temporary job creation. But Virginia is home to a rich community of people who consider filmmaking their full-time occupation — or at least would like it to be.

Local editor Rex Teese has worked on major film projects around the country. He says the number of talented film professionals in the Richmond area once was on par with, and sometimes surpassed, the talent pools of cities that count on the film industry for economic stability.

But numbers in Virginia have been dropping. Graduates of the Virginia Commonwealth University cinema program are turning their sights to graduate school and jobs in other states that have long-established film incentive programs. One of those alumni, Stephen Harris, says he plans to move to New York once production of “The Projectionist” is complete.

“The big film is the [film professional's] major bread and butter, 50 to 60 percent of their annual income,” says Daniel “Bud” Oakey, managing director of Advantus Strategies, a local consulting and lobbying firm that follows the industry. “The little ones are the rest of it. They need the big one so they can have all the resources available to work on their own smaller projects, the independent films.”

Two major productions that came to Virginia, “Evan Almighty” and the HBO miniseries “John Adams,” had combined budgets of $100 million — $14 million of which helped hire 1,000 crew members and 10,000 actors and extras. The rest went to hotel room rentals, transportation, food, set construction and wardrobe, most of which was purchased in Virginia. The projects had a combined economic impact of more than $200 million when they were filmed in the commonwealth, according to a case study from the Virginia Film Office. Rita McClenny, the office's vice president of industry relations and film, says that a 2.12 multiplier is what economists typically use to figure the economic impact of an entertainment project (see sidebar). “It's what is spent on additional economic drivers,” she says — “like someone, say a producer, goes to a local restaurant, or the money that goes to a salary allows that person to spend money on something else.”

Hope for this kind of economic potential mostly faded in recent years. In the last four years, Virginia lost $367 million of business to other states, according to the Virginia Film Office. Even films with strong local ties have been lost. “Secretariat,” which opened nationwide in October, is a film about a legendary Hanover County horse that won the Triple Crown in 1973. Directed by Henrico County resident Randall Wallace and filmed in Kentucky and Louisiana, advocates say that this one production, based on a true local story, could have brought $30 million worth of economic stimulus to Virginia.

Hopes are high that the new incentives will change the playing field. “In order to pay the bills you got to have the real job,” director Krost says. He hopes the Virginia filmmaking community soon can stop “making do” when all it wants to do is make movies.