A documentary cuts through the steroid-scare hoopla. 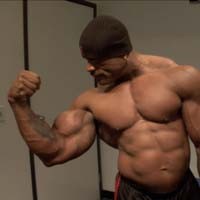 Chris Bell, creator of the new documentary "Bigger Stronger Faster,*"probably does not want you to take anabolic steroids. So it's all the more remarkable that he's made a film that more or less demolishes the pervasive idea that steroids pose a terrible risk to all and sundry who use them, especially "the children." Much more than a debunking of vulgar errors, "Bigger Stronger Faster* is an engrossing exploration of the way media, politicians, confused mourners and good old-fashioned American snake oil have come together to gin up a frenzy over what appears to be a minor irritant to society. Gripping, fact-laden and at times rivetingly personal, this movie makes it clear that the current brand of steroid scaremongering is bound to go the way of "Reefer Madness." Steroids, like those far more industrious killers, tobacco and alcohol, are here to stay.
"I was just 12 years old," Bell tells us in his recollection of the early 1980s, "and there was an explosion of ass-kicking in America." Arnold Schwarzenegger, Hulk Hogan and Sylvester Stallone strode the narrow earth like ripped colossi. Bell and his two brothers, raised in a modest, God-fearing home, all go in for weight lifting in a big way. Both brothers end up steroids enthusiasts, one of them getting his first dose from an uncle. In an America awash in testosterone and its synthetic substitutes, controlled substances can be all in the family.
Bell certainly isn't cheering on his brothers in their efforts to circumvent dad and the law. In fact, the story of one brother's doomed, steroid-fueled attempt to break into wrestling, even as he pushes 40, is so depressing that it almost threatens to push the movie off course.
The point, however, is that the toxin that derails lives and leads people to sacrifice everything to muscle mass isn't in a syringe. It's in the culture. What Bell objects to is the tawdry notions of success that turn people into grotesque versions of themselves. In this respect, many of the users who populate "Bigger Stronger Faster*" are the same as, say, the stockbrokers in Oliver Stone's "Wall Street," another cri de coeur about "the side effects of being American" (this documentary's subtitle).
What gives the film its teeth, however, is Bell's patient, dogged pursuit of data, in the course of which he dismantles, brick by brick, our collective notion of steroids as a medical scourge. 'Roid rage, for example, proves to be something everyone knows about, but no one seems able to document. There's no good reason to suppose that National Football League star Lyle Alzado's brain tumor resulted from steroid use. More emergency room visits are occasioned by vitamins than by steroids. And on and on.
Television documentaries, news reports and congressional hearings on steroids deliver an unenlightening combination of (certainly understandable) sentiment about dead people and a lurid fascination with bulging body parts and derangement. Bell, however, is too interested in the truth to go in for such distractions. When he questions a prominent anti-steroids activist, the father of a boy who committed suicide, he does something you almost never see on the screen, big or small: He tries to reason with him. Reason may not prevail, but it makes for a quietly gripping encounter, nonetheless.
Even when he's interviewing a befuddled Rep. Henry Waxman, Bell comes across as self-effacing and respectful, even if honestly disheartened to find that the people writing the laws don't know what they're talking about. He's a refreshing alternative to a showman like Michael Moore, who, by contrast, all but does a jig when he roots out ignorance or stupidity in high places.
In Bell's hands, steroids are revealed as one of those things people know it's important to be upset about, even if they're not sure why. (Diabetes, on the other hand, is a real danger that sets almost no one's pulse racing.) Nevertheless, Bell suggests, the future of steroids is secure. We may say we hate drugs, but we love to watch people on steroids hit home runs, score touchdowns and win wrestling matches, and we pay handsomely for the privilege. In the long run, money and the market are bound to prevail. For Bell, that's certainly no cause for rejoicing, but his misgivings are moral, not medical. What he forcefully argues is that the fault is not in our steroids, but in ourselves. (PG-13) 105 min. ï¨«S