After a quiet first year, VCU President Michael Rao suddenly finds himself in the crosshairs of controversy. 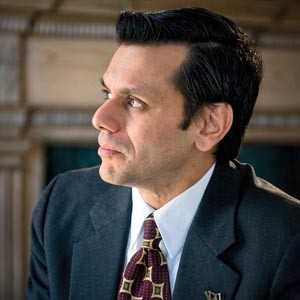 In the hallway of the Student Commons building at Virginia Commonwealth University, students sit on sofas peering into laptops or textbooks. One is sprawled asleep, apparently unaware of the critically important discussion going on next door in the Richmond Commons Room.

VCU's 16-member Board of Visitors, the school's ultimate authority, is in executive session Nov. 11 discussing what to do about the swirl of controversy surrounding the school's president, Michael Rao, who's been in office for 16 months.

Charged with trying to raise the state's largest university beyond its second-string academic level, Rao has had his hands full. Yet he's been dogged by criticism that he's been slow to make change and that too many critical positions, such that of as provost, and deans for the College of Humanities and Sciences and School of Arts, have gone unfilled for too long. His fastidious persona and habits have set him apart from Eugene P. Trani, his powerful, flesh-pressing predecessor.

Issues hit a critical turn Nov. 10, when the university announced that Rao's chief of staff, Wayne Turnage, would leave in January following a little more than a year in office. Picked by Rao, Turnage — former Democratic Gov. Tim Kaine's chief of staff — is known as an efficient technocrat who works to achieve Rao's goals of “recalibrating” VCU and improving its academic reputation and research acumen following two decades of a massive construction buildup.

Yet Turnage plunged into controversy when he resisted efforts by Monica Rao, the president's wife, to fire Kathy Honsharuk, Turnage's deputy, Honsharuk says. Rumors have percolated on campus that Monica Rao got into a heated argument with Turnage in front of several spectators at a Panera restaurant at Laurel and Grace streets in recent weeks.

Pamela Lepley, a spokeswoman for VCU, declines to comment on the allegations surrounding Rao and Turnage's departure.

One issue for the board will be checking whether Monica Rao, an international alumni relations liaison at the university who doesn't have her husband's authority, overstepped her authority regarding Honsharuk. (Maurice Jones, president and publisher of Style Weekly's parent company, serves on the Board of Visitors.) A Panera manager says she knew nothing of the incident although she noted that others have asked about it. Contacted by Style Weekly, Turnage replies, “I have no comment about it at this time.”

Members of the community say that many key positions remain unfilled. “I think that some of the facts speak for themselves. There's been tremendous turnover,” says Stephen D. Gottfredson, who was provost until March and now serves as a professor of government and public affairs. While there's an acting provost, a search is under way to fill the post.

While Turnage's departure isn't expected to delay filling the positions significantly, the drama raises questions about the managerial ability of Michael Rao, who was president of two other schools, including Central Michigan University, where he seemed to have had no similar problems.

To be sure, Rao came to VCU when it had a full plate of challenges. The recession and state funding cutbacks forced Rao and the Board of Visitors to hike tuition 24 percent this year. VCU, meanwhile, had been embroiled in such controversies as awarding former Richmond Police Chief Rodney Monroe a degree after he took only two courses at the university. The school's national reputation for research took a hit when it got involved in secretive research contracts with Philip Morris USA while other better-known schools shun tobacco industry money. And Trani ruffled many feathers with his hard-charging construction plans.

Part of Rao's problems could be related to idiosyncracies. He's given his wife a bigger role at the school than his predecessors gave their wives, and the couple is known for micromanaging schedules and dinner menus.

Michael Rao also has a reputation for being a good listener and is seen by some as a needed change after Trani, who led the university's massive campus expansion.

William H. Goodwin Jr., a billionaire investor and philanthropist and major financial donor to VCU — he and his wife, Alice, pledged or donated more than $100 million to the university during Trani's tenure — says he supports Rao and his mission to improve the university's academic standing.

After years of campus building, however, such change requires a change philosophically, Goodwin says, which takes time. “I'm very much in support of what he's trying to accomplish at VCU,” Goodwin says. “I think everybody ought to be given a little time. I would hope our community would rally around him and support [Rao].”

Whether his era at VCU will be short-lived or is just a bump in the road is up to the Board of Visitors to decide.