John MacLellan Eddie Wesbter as Tiny Tim and Joe Pabst as the Bartender in RTP's "Christmas on the Rocks" which runs through Dec. 17.

Can’t we all have Joe Pabst as our bartender? Funny, warm and charming, the local actor would be the perfect publican to commiserate with on a cold, windy day. For Chrissakes, his last name is even “Pabst.”

In “Christmas on the Rocks,” the latest show to take up residence at Richmond Triangle Players, Pabst is perfectly cast as the barkeep of the Wunder Bar, a cozy, wood-paneled pub that’s decorated for the holidays. But Pabst isn’t here to listen to your garden-variety woes of life and love. For some reason, grownup versions of our favorite holiday characters keep wandering in to inform him, and the audience, of how their lives have gone since we left them.

There’s Ralphie from “A Christmas Story,” now an adult, separated from his wife and sporting an eyepatch. There’s Karen, the blonde girl from “Frosty the Snowman” who’s running from the authorities after melting Frosty with a hair dryer. And there’s Charlie Brown, unhappily married to Lucy and still pining after that Little Red-Haired Girl. Before each scene, a short clip from each Christmas movie is played from a too-small television on William Luther’s otherwise perfect bar set. 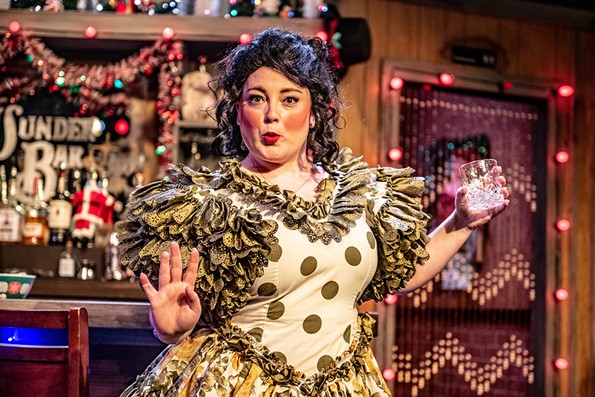 In scene after scene, Theresa Mantiply and Eddie Webster alternate playing visitors to the Wunder Bar, and Pabst’s bartender does his level best to accommodate these strange characters. The trio do marvelous work with the material, which doesn’t always live up to their comedic talent.

One of the best scenes features Webster as Hermey the elf who wants to become a dentist from the 1964 stop-motion classic “Rudolph the Red-Nosed Reindeer.” The twink-y nature of Hermey is played up in Webster’s rendition – the bartender asks if he’s in from Provincetown – and we learn that Rudolph is an egomaniac who had to be put in his place.

Another good scene features Mantiply as Zuzu, George Bailey’s daughter from “It’s a Wonderful Life.” Her belief that an angel gets its wings every time a bell rings has grown into full-blown psychosis; she’s convinced the angels are after her for popularizing a loophole in angeldom.

Directed by Axel Burtness, half the time “Christmas on the Rocks” works and half the time it feels like a “Saturday Night Live” sketch that’s gone on for two long (which, these days, is most “SNL” sketches). Pretty much every scene could do with some trimming, and at least two of the scenes could be cut entirely.

In fact, some of the funniest moments the night I attended came from the actors improvising. When the actors accidentally dropped a coin or one of them had a short coughing fit, their ad-libbed recoveries got some of the biggest laughs.

While this dark parody doesn’t always hit its marks, it’s still got enough spark for an evening’s refuge from visiting your family this holiday season.