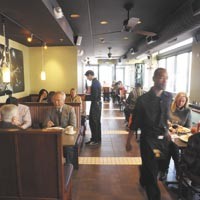 It's a long way to the top if you wanna rock 'n' roll. Just ask Constantine Giavos, the drummer for Duchess of York and son of restaurateur Johnny Giavos. Or ask Ed Trask, whose art adorns the walls of many Richmond landmarks and who, when he's not waiting on tables at Millie's, still finds time to drum for local music icon Avail. Culinary, artistic and musical talents often overlap, and there's no better example than Gibson's Grill at the if-you-haven't-already-you-gotta-see-it National.

With neon signs, a series of nearly menacing Trask paintings, a name that references both a classic cocktail and a classic guitar, and a basement lounge with private nooks and plush, curvaceous banquets, this is Richmond's best (only?) setting for a true rock-star fantasy. And they know it — I didn't hear a single track of poser pop on any of my visits.

The real trick with this newest Giavos venture (he has his fingers in the figurative pie of a handful of kitchens across town) is that it defies normal restaurant rhythms. Depending on the show schedule next door, the busiest night of a given week might be Monday rather than Friday.

The wait staff says Dark Star Orchestra fans are the biggest eaters. (Now why on earth would fans of Grateful Dead re-enactors be so hungry?) And — surprise, surprise — New Year's Eve GWAR fans were more trouble than their tips were worth. In dizzying contrast, working stiffs from the adjacent government buildings comprise the lunch and happy-hour crowd. They're certainly a welcome balance to the unpredictable chaos of concert crowds. Dylan understood that you gotta serve somebody, even if it is the man, right?

Gibson's menu will be as familiar as a D-chord to anyone who frequents Kitchen 64, 3 Monkeys Bar and Grill or the Sidewalk CafAc. Here we have the greatest hits of those venues arranged with adequate kitsch into Opening Acts (appetizers, obviously), Roadies (sandwiches and burgers big enough for a hard-working appetite), Groupies (unfortunately dubbed for the lighter salad and soup options), Headliners (for the steak, pasta and seafood entrees) and Encores (for the selections of homemade desserts). Prices range from around $8-$23 and you'll find plenty of options for the vegetarians in your entourage, including a good (if pedestrian) hummus platter and an unusual warm onion and tomato salad with fried onion rings and sautAced cherry tomatoes in a gorgonzola cream sauce.

If you're a fan of the Giavos repertoire, then you'll be pleased. This is rock not jazz, after all. Not too much thinking needed when the choice is between nachos and a burger. And the portions are big enough for two, so splitting an entrAce before a show might be the best way to go, or perhaps you'll cobble together a medley of appetizers for a range of flavors and minimal cash. Particularly noteworthy are the grilled roast pork Cubano sandwich, which almost meets the standard set by Kuba Kuba (another Giavos side project); and the steak au poivre, which seems a bit over-reaching for a rock joint but brings a mushroom demiglace that's spot-on.

A few of the selections ring false. The roasted pork loin with maple-pecan glaze is not the lyric rendition of thin, melt-on-your-tongue slices that the boys at 3 Monkeys give this number. Instead, thick slabs are cut against the grain, and veggies appear to have been beaten out of a frozen state into a buttery garlic mess. These missed details echo the important subtlety of a stellar rhythm section — overlooked if perfect, jarring if flawed.

The wait staff is composed of pretty young things — male and female — who know their stuff and make everyone feel welcome. Then there's Giavos himself, throwing bear hugs to old and new friends between visits to the kitchen. And that's the rock 'n' roll of it; it's all in the feel of the joint. S