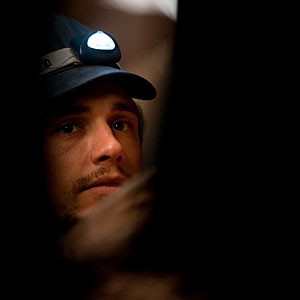 "127 Hours” really makes you want to visit the wide-open spaces of the American Southwest, then it really makes you not want to. The movie is based on the harrowing true story of Aron Ralston (James Franco), an exuberant outdoorsman who got his arm trapped by a falling rock while alone in the middle of Utah in 2003. What happens next is drawn out and gruesome, right up the alley of “Slumdog Millionaire” director Danny Boyle, who keeps Ralston's fateful week burning with suspense and dread. The result is a survival movie difficult to watch or look away from.

In Boyle's telling, Aron is a man so eager to get to his next trek across the desert that he drives to the starting point in the middle of the night so he can wake up ready to go with the sunrise. By the time he leaps out of the back of his truck at daybreak, Boyle has told us all we need to know about his character, using split screen, quick editing and lo- and hi-res film to show Aron's regimen, stuffing his backpack with water, ropes and other supplies. Each item taken and left behind eventually will acquire great significance.

When the sun comes up over the stone surface of Aron's favorite trail, he dashes forth on the back of a mountain bike, careening with ecstatic abandon into remote canyons and scrubby brush. One of Boyle's gifts, notable since “Trainspotting,” is his ability to translate feeling to the screen with limited dialogue. Interspersed with some of his own footage, Aron's solitary thrills are envious to observe. And that's before he runs into two young women (Amber Tamblyn and Kate Mara) in the middle of his special nowhere, leading them on a miniadventure to a secluded underground pool. For the moment, Aron's life seems perfect.

Promising to meet the girls at a party he will never make it to, Aron moves on, hopping, climbing and shimmying his way through several narrow, natural passages just below the Earth's surface, a natural playground. Then a boulder gives way, and he tumbles with it, coming to rest with at the bottom of a shallow shaft, his arm wedged against a wall by the rock. Bemusement at such a unusual predicament soon gives way to irritation as Aron tries, unsuccessfully, to budge the thing. The movie then becomes Aron's stationary but epic battle to get free, pressing, tugging and chipping away at the boulder as the hours pass into days, his supply of water ever dwindling.

It might sound like the cinematic aspect of Aron's journey is over, but Boyle keeps the screen churning by interspersing Aron's various attempts to free his arm with his reflection on the events leading up to this point, a meditation that grows to encompass much of his life — agony, guilt, fatigue and then hallucinations intermingling in his thoughts to produce the conclusion that he unwittingly willed himself into contact with the boulder.

The fate that befell Ralston after these darkest moments is as notorious as it is gruesome, but if you don't want to know until you've seen the movie you'd better stop reading now. Of course he survived to write the memoir upon which the film is based. It's just extremely doubtful he did so with his right hand. If you were recounting this story at the water cooler, you'd start off with this, the goriest detail, and Boyle does not shy away from it, obscure it, or politely leave it off-camera. There have been tales in the media of vomiting, fainting and even seizures during parts of this movie. (The fainting stories seem to be true, unless the studio is planting fakes in the audience. According to a friend, a man stood up and fainted next to her.) Be warned, “127 Hours” is not for the squeamish.

Is it about anything other than a sensational and unlikely event? Just enough, I'd argue. The story isn't nearly as meaningful to us as it turns out for its protagonist, but his vicarious thrills and pains are well worth an hour and a half of our time. A movie can make entertainment out of a stomach-churning subject, and in its own small way “127 Hours” is thought-provoking, too. Here we have a man who loved pushing life to the extreme, only to find life could push back, hard. (R) 93 min.