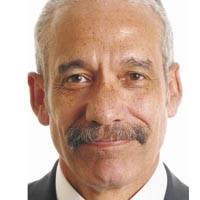 Of all of life's lessons, those Robert James Grey Jr. learned from his father, a retired master sergeant, are most outwardly visible.

Standing tall and straight, the lanky Grey cuts a meticulous figure in his starched, white-collared, blue-striped button-down. Cuff links are de rigeur. The 58-year-old's chiseled, angular face is interrupted by a long moustache framing his mouth, and his loosely curled hair, streaked with occasional gray, is worn slicked back against his scalp like a silent film star of the 1920s.

Grey was 14, a neighborhood kid growing up in Battery Park, when he went to his dad to ask for an allowance.

The senior Grey listened intently to his son's case for a subsidy, he recalls. When the boy was done, his dad told him he thought it was a fine idea that he should have some spending money.

“So he took me downtown and got me a work permit,” Grey says. “I was just a baby.”

Learning his father's work ethic — it's not worth it to you if you can't earn it yourself — Grey found himself scrubbing floors and lugging boxes in the stock room at Colonial Stores, a neighborhood grocery store.

“I had money in my pocket,” Grey says, still puffing with pride at the memory. “There was a difference sense of having it — because I earned it.”

Grey finds himself trying to earn something once again.

In ways, Grey acknowledges he's been an absentee resident of Richmond. His whistle-stop bus tour serves the dual purpose of reintroducing himself to the lower- and middle-class families he grew up with, and of familiarizing himself with the economic importance of mass transit.

“I don't know if it's relearning as much as it is getting up to speed,” he says of coming home to the place he never left. “It's catching up with old friends. I don't feel I've lost touch.”

If Grey ever “lost touch” it was simply because of his success employing the life lessons taught to him by his father and mother, Barbara Grey, a highly regarded, retired Richmond Public Schools educator.

After graduating Richmond's John Marshall High School, Grey earned a business degree from Virginia Commonwealth University. He moved on to Washington and Lee University, where he earned his law degree, and then to Washington, D.C., for a stint as a lawyer with the National Labor Relations Board.

Grey's D.C. stint — his first foray into politics on the bureaucratic side — lasted just two years. He came back to the city of his birth and started teaching night classes in business law at VCU while starting his own law practice.

By the early 1980s, Grey began to show signs of statewide political ambition. It paid off quickly.

After supporting Chuck Robb's race for governor, Grey was rewarded with appointment as the youngest chairman and first black to lead the state's Alcoholic Beverage Control Board. With 1,500 employees and an agency steeped in bureaucratic inefficiencies, Grey says he worked to modernize the agency's retail functions. His ideas, in some cases, were ahead of their time.

Among those ideas was to allow customers to pay by credit card. “I was called into the governor's office and asked, ‘What are you doing?’” Grey recalls. The idea was killed, though a successor revived it.

After beverage control, he went back to private practice. In 2002 he joined high-power law firm Hunton and Williams — proof of the reputation he'd built both politically and professionally — where he specializes in mediation. Further proof of Grey's reputation among his peers came in 2003 when he was elected president of the American Bar Association.

Which is why Grey is riding that bus: to reach out to the community where he forged his first memories and that he loved enough to return.

Good government, Grey says, is supposed to be about what the city can do for its citizens, something he's seen as sorely lacking in Richmond.

“We have been a city run by politicians — it's not a bad thing, but it's a fact,” he says. “I believe Richmond is ready for a leader who has management skills and a professional attitude and who gets results.”