Architecture Review: The new Altria Theater renovations mostly are an improvement, right down to the show-stopping Egyptian revival acid-trip ballroom.

When I ask a friend who recently moved to Brooklyn what it's like, she replies, "Everyone in Brooklyn's trying to be like Richmond."

With galleries, coffeehouses, restaurants and music venues sprouting in all directions, Richmond's getting some well-deserved attention. But what makes the city's recent polish possible is its solid bones. There's the tight and logical street grid that relates to the river, plus distinctive neighborhoods, substantial architecture and memorable landmarks.

And the polishing continues.

On the heels of the grand reopening of the Valentine museum last month comes the unveiling of the $63 million renovation to another beloved institution, the Altria Theater, previously the Landmark and before that the Mosque. With 3,600 seats, the former Shriners' hall is the largest performing arts center between New York and Atlanta. It's been host to such wide-ranging acts as the Metropolitan Opera and Elvis during its storied past.

Since opening in 1927, the opulent, Moorish-revival style Altria has undergone three or four renovations. These rehabs respected and mostly tweaked the facility designed by Richmond architects Marcellus Wright and Charles Robinson. But the place long had been frumpy. So the just-completed makeover, led by the Boston-based firm of Wilson Butler (also architects for the CenterStage project a few years ago) was long overdue. It delivers considerable contemporary punch while remaining largely celebratory of and deferential to the spirit of the place.

But there are changes.

The twin minarets still lord over Laurel Street and Monroe Park, but the delicate old electrified marquee has been replaced by a larger, too-bright and digitized version that screams when it doesn't have to. The Altria is a historic landmark. The blocks surrounding Monroe Park are completely residential with single-family homes, condos and college dormitories with the exception of three churches and the theater. So how this garish carbuncle got approved is a mystery.

But wait. A second, trapezoid-shaped marquee, not quite as large, but also blinding when lighted, has been added on the Main Street side. It announces the entrance to a new box office. I get that, but visually it affects the energy of the building. The Altria now appears to list, like a boat, southward. Would anyone consider hanging klutzy signs on such iconic architectural and theatrical landmarks as Carnegie Hall, Lincoln Center or the Kennedy Center? I don't think so. 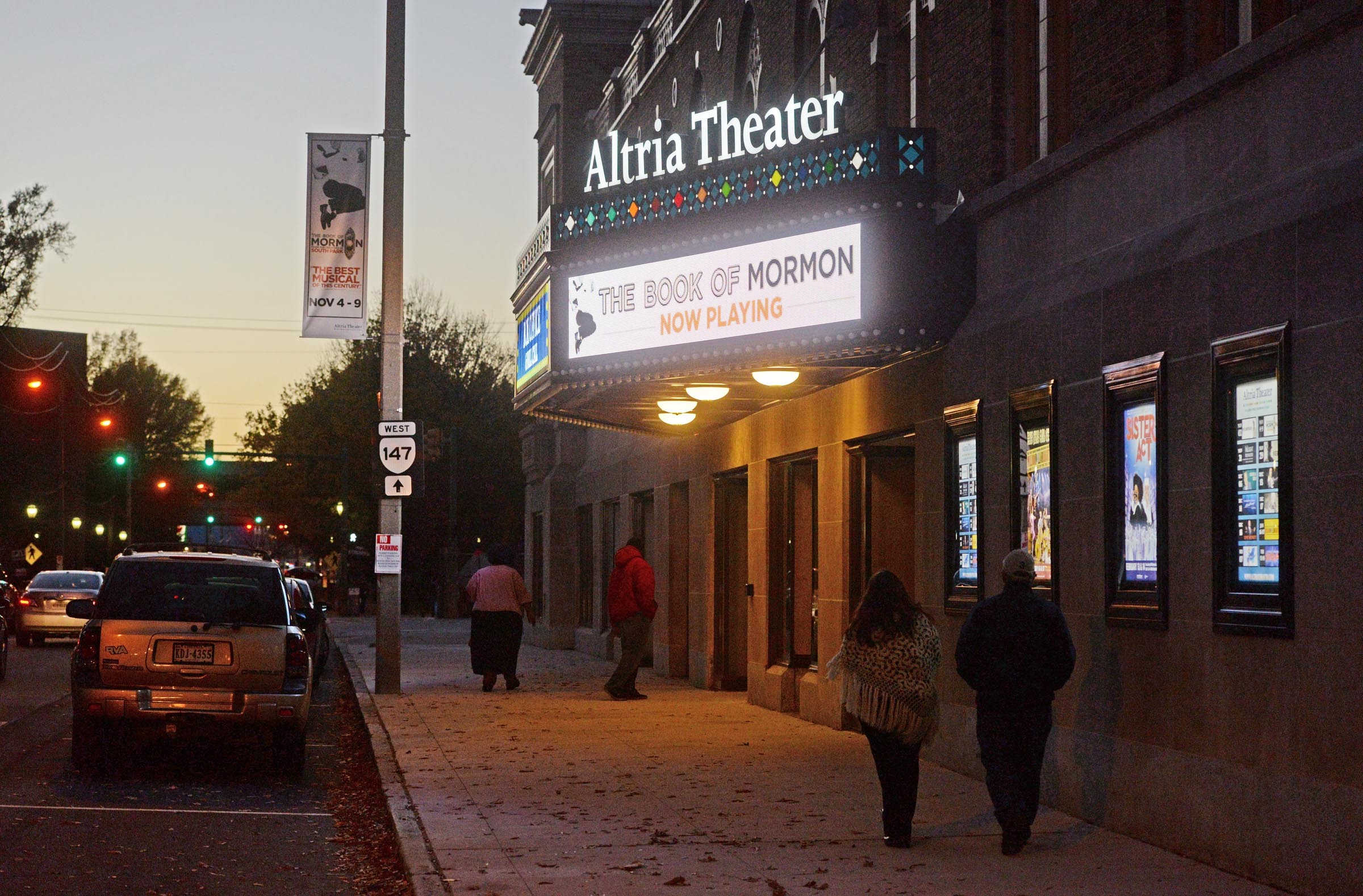 Inside, the restored Altria is pretty much how it was, but better. On the ground floor, the entrance fountain and the colorful, elaborately patterned floor and wall tiles have been retained and cleaned. Custom-designed carpet paves the familiar ramp than runs up into the orchestra section. While I can't speak for opening night in 1927, the auditorium has never looked better, with gold-patterned carpet and new seats that maintain a 1920s silhouette and rich, rust-colored upholstery. An interior that was a sea of reds is now a handsome blend of autumnal hues.

And if the marquees are blatant marketing ploys screaming to passersby, patrons won't be disappointed once they're inside the public areas. Added amenities such as bars, expanded bathroom facilities and thoughtfully appointed lounges are a radical improvement over the Soviet-era feeling of the former lobbies. Wooden floors, long hidden by wall-to-wall carpeting, have been revealed, and area rugs add warmth. Colorful and original architectural and decorative detailing throughout, playing off traditional — and maybe fancifully fictitious — Middle Eastern motifs have been uncovered, meticulously restored or reworked. Oh, those Roaring 20s!

But the show-stopper is the ballroom on the lower level, directly beneath the auditorium. What was the dreariest of event spaces and long-painted that indelible shade of government or classroom green has been transformed into the decorative equivalent of an Egyptian revival acid trip. The room where Virginia Commonwealth University and RPI held class registration before computers, and generations of city high-school seniors lined up for their commencement processions, has been turned into a space that can join the ranks of the city's most beautiful function rooms. But the elegant décor of the Commonwealth Club or John Marshall ballrooms and the Jefferson's Empire Room are tame compared with this wonderfully eccentric and exuberant space. The broad expanse of terrazzo flooring is a solid platform for the rows of thick columns with Egyptian lotus blossom capitals. A large, newly installed bar and a catering kitchen have been added to accommodate 1,000 for standing or 650 seated guests. And the ceilings seem higher than before. The room's a winner.

With all these attractive changes — many, like acoustical adjustments and backstage facilities, aren't visible to the public — there are some disappointing losses. The Wurlitzer organ was removed without good explanation. This perfectly serviceable instrument will now require some $600,000 for restoration. And where are the two city-commissioned public artworks that were installed when the theater was renovated in 1990s? But the show goes on and patrons should be dazzled by the well-thought out renovations and décor if a little blinded as they enter under the new marquees. S