How a gas station became destination dining on the Northern Neck. 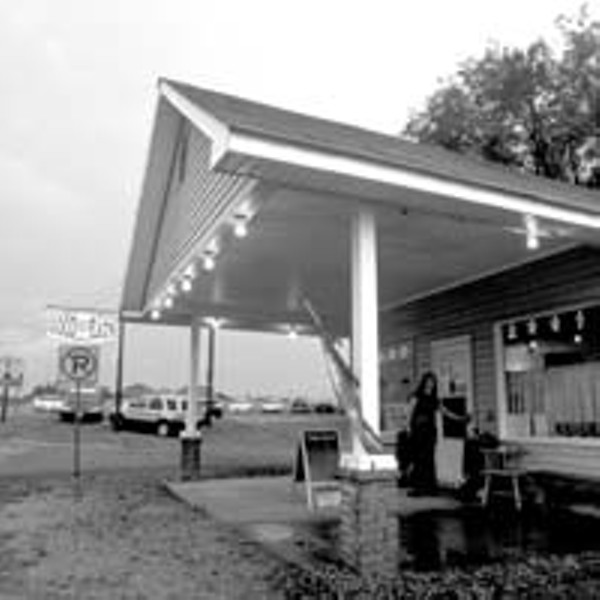 The locals and summer people have discovered this place, so expect a wait for a table; reservations are only for parties of eight or more. But it's worth it. On these summer nights, you can take a drink outside and sit on a bench next to where the gas tanks once stood and breathe in the fresh country air.

Chef-owners Steve Andersen and Sally Rumsey came to the area a dozen years ago seeking a weekend retreat for their merged families and a respite from demanding jobs in Washington, D.C., where Steve was a hotel chef and Sally led a double life, cooking for the city's homeless at lunch and for its wealthiest families at night.

But the commute was onerous, so they quit their day jobs and tried to scratch out a living on their 40-acre farm. When that didn't pay the bills, they bought the former gas station, gutted it, painted the interior a funky yellow-gold, sprinkled stars and hung strands of lights around the ceiling and windows, and in August 1997 christened the Good Eats Café.

Now both of them cook until the door opens, at which time Sally takes over the front of the house while Steve stays in the kitchen.

The star of the menu is fresh seafood, including crabs and oysters brought in by area watermen, and locally grown produce, some from their farm five minutes away: tomatoes, melons, asparagus, herbs and blueberries from 900 bushes.

The Chesapeake crab soup is the most flavorful I've ever inhaled. It is a labor-intensive mélange of bacon, onion, celery, potatoes, red and green peppers, mushrooms, herbs and Angostura bitters topped with hearty chunks of fresh crabmeat. For all that, it's light and airy.

A bowl of mussels with garlic and white wine is another surefire "first eats."

So is coconut shrimp, which one patron called the best coconut she'd ever encountered in such a dish, served with sides of orange marmalade and horseradish.

Steve, always tinkering with the ingredients, added a grainy mustard to the backfin crab cakes this year, a welcome diversion from Old Bay seasoning.

If soft-shelled crabs are on the menu, think no more.

Meat-eaters can choose from grilled rack of lamb chops over risotto with a red wine mint sauce or beef tenderloin and shrimp kebabs over jasmine rice with a portobello sauce.

A favorite of the locals is the Thursday night special — rare prime rib with Steve's special sauce.

Nightly specials might be grilled pork loin with a crunchy red curry sauce with almonds and Thai basil, or pasta with pear and cheese filling with a walnut sauce and orange glaze.

Over the years, the menu has been influenced by the owners' winter trips to Thailand, Holland, Ireland and, most recently, to Charleston, where Steve's inability to find the perfect shrimp-and-grits led to his own version: eight jumbo shrimp piled high over a wedge of thick grits, with chunks of garlic and bacon and a dark gravy.

A signature dessert is chocolate puddle, a baked white mousse cupcake with whipped cream, made by a woman in Callao, five miles south of Route 360, which is the road to Richmond. S