Road Trip Food Review: At Chops, Come for the Steak and Stay for the Seafood

Chef Eric Nelson is a pillar of the Hampton Roads dining scene. Throughout his extensive career, he has trained in or skippered some of the region’s finest kitchens. From Vintage Tavern in Suffolk to the Trellis in Williamsburg, Todd Jurich’s Bistro in Norfolk to Steinhilber’s in Virginia Beach, he has cooked professionally in every corner of the region.

For much of last year, he also ran a series of transient, “pop-up” dining events he called Blue Tape, which offered him the opportunity to display an avant-garde cooking style that was unique in Tidewater. While not every dish on his experimental menus worked for me, many of them were exceptional and left me thinking about them for days afterward. In fact, his kimchi marinated peach slice was the best morsel of food I ate last year. Its one-bite, sweet-ripe zing left me dazzled.

These days, Nelson is bringing his pedigree and culinary gravitas to Chops, the durable steak and seafood restaurant located near the heart of Virginia Beach’s Oceanfront.

Upon entering, my wife and I were seated at a cozy booth near the round, marble-topped bar that centers the space. Our efficient server, Stephen, presented us with menus that offered an immediate clue that the Chops menu has evolved beyond normal steakhouse fare.

While the right side of the menu carries the traditional items you come to expect at any high-end steakhouse, like prime grade steaks, rack of lamb, wedge salads and shrimp cocktail, the left side is titled Chef’s Menu and contains dishes put together in much the same style that we experienced at the Blue Tape offerings.

Along with a half-dozen Rappahannock oysters on the half shell, we started with an order of whipped seafood spread served with crostini and pickled vegetables. It came to our table piping hot with a decadent amount of bubbling cheese sauce blanketing the mixed seafood. The pickled carrots and cucumbers were a perfect adjunct to help cut through all that delicious richness.

My wife stuck with the traditional side of the menu for her entree and ordered the petite filet with a supplement of sauteed wild mushrooms and lemon garlic broccolini. The payoff of the wild mushrooms is worth the $4 investment. The added burst of earthy umami flavors complemented the flawless medium-rare filet.

The only imperfection was that the broccolini arrived naked without the promised wardrobe of lemon and garlic. However, it tasted fine on its own, so we chose not to send it back.

My eyes stayed glued to the left side of the menu where I chose the local rockfish with clam chowder sauce served over a bed of buttermilk mashed potatoes. The kitchen again displayed a deft hand at cooking proteins by serving me the rockfish with impeccably crisp skin and just-cooked, butter-soft flesh that nearly fell apart on my tongue .

It is exactly how such a magnificent fish should be cooked.

The clam chowder sauce was studded with clams and lardons of house-cured bacon, which imparted an assertive saltiness to the dish that would likely overwhelm some softer palates. Luckily, I grew up eating clam chowder and prefer a salty kick in each spoonful.

While the flavor was by no means out of my wheelhouse, the kitchen did undermine the dish by oversaucing it to the point that it resembled something more akin to a classic oyster stew over mashed potatoes.

If this was the intent, it did not work. Perhaps the word “stew” would have been a better descriptor than “sauce.” Anyway, a little more restraint would have paid dividends since, conceptually at least, the dish was solid. 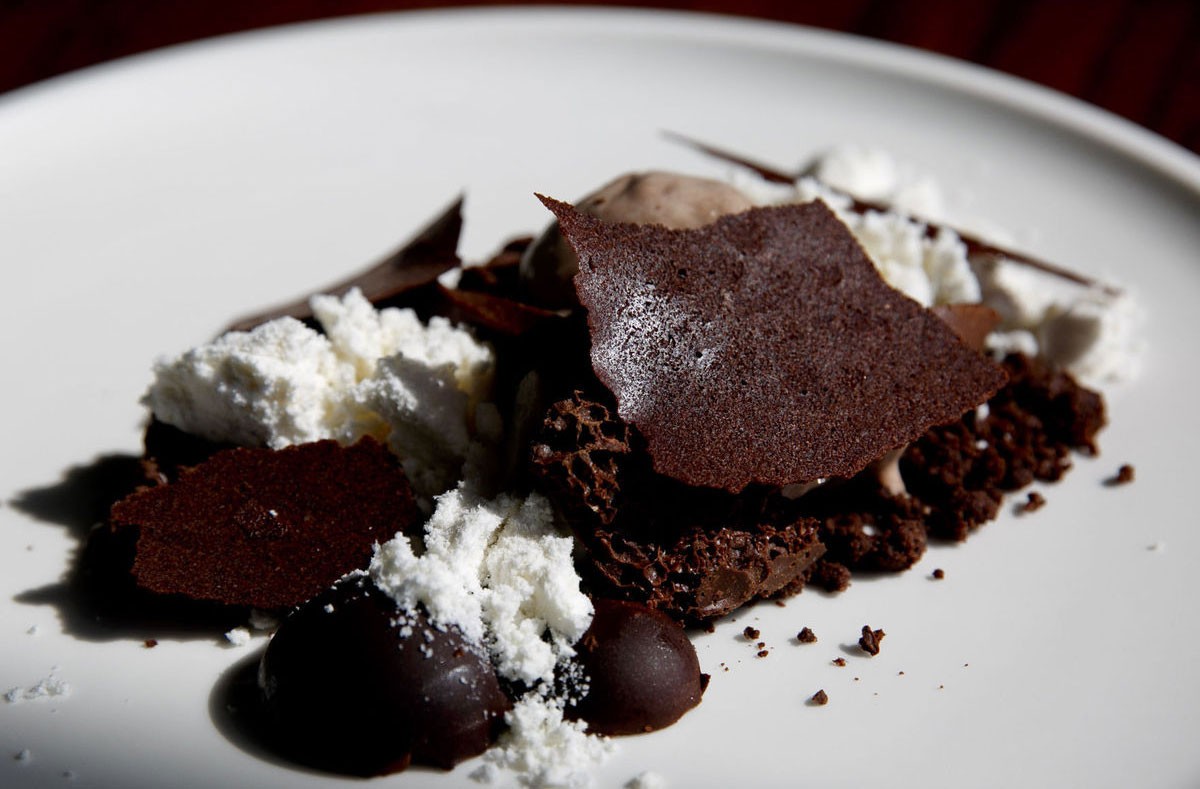 Dessert ended our meal on a mile-high note when my wife chose the answer to every chocoholic’s craving, a dessert that Nelson refers to as Fun With Chocolate.

Splashed across a white plate are bons bons of chocolate mousse covered in a dark chocolate ganache, centered by a quenelle of milk chocolate ice cream. It is all set on a bed of chocolate soil with a snow of powdered white chocolate. A twist of chocolate bark offsets the tastiest forest scene you will ever eat.

My wife finished it with a wry smile and dilated pupils, her signal for utter contentment.

So come to Chops knowing there is plenty on offer to satisfy steakhouse purists and adventurers alike. Chef Nelson has every appetite covered.