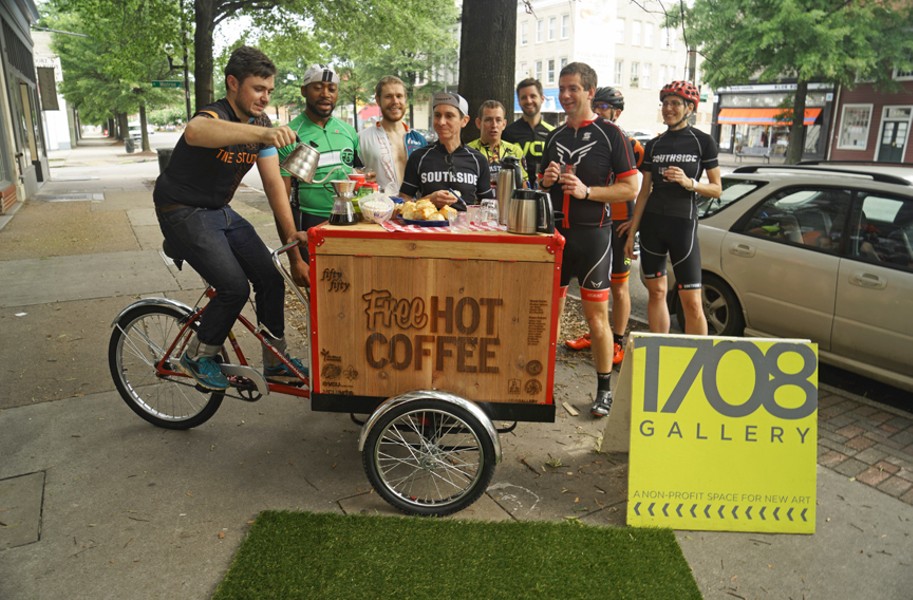 The Coffee Bike features a pop-up, pour over station and is run by Rams in Recovery, a VCU group that addresses many kinds of addictions, including alcoholism and eating disorders.

When artist John Freyer moved away from Iowa in 2000, he sold all of his belongings on eBay. It wasn’t a gimmick for the Virginia Commonwealth University associate professor, but part of his artistic practice that blurs the distinction between life, art and performance. So it makes sense that when he started addiction recovery in 2013, Freyer merged art and recovery to end his addiction, learn about himself and the power of conversations, and relearn empathy.

When Freyer first arrived in 2013, he identified as a person in recovery and the director of the university’s Wellness Resource Center, Linda Hancock, informed him there was a group starting on campus to support students. Eventually Freyer was plugged into Rams in Recovery, a collegiate group that addresses addictions, primarily alcoholism and drug abuse, but also destructive behaviors in general, including eating disorders or self-harm.

Freyer initiated his Free Ice Water program shortly thereafter. He invites pairs of people to have often personal conversations over a Mason jar of ice water about a turning point in their lives. A personal memento is sealed in the jar at the end of each conversation. In 2016, Freyer built his first Coffee Bike, a pop-up, pour-over coffee station run by Rams in Recovery students that distributes free coffee while engaging people in conversations.

“In recovery, everything works on community,” Freyer says. “If you’re struggling and you see a group of people who are living a life that looks fun and healthy, you can see that it’s possible … but also people have an idea about what addiction looks like … when they run into people that look like them, it changes the conversation.”

It’s been successful: Freyer has replicated Coffee Bike at the University of Georgia, Georgia Tech, and Pennsylvania State university with collegiate recovery students. Abroad it has been replicated at the Liverpool Biennial Fringe in Liverpool, England with Brink, an adult recovery group. Now, Freyer, the Rams in Recovery program coordinator Tom Bannard and Tate-Exchange-partner the School of the Arts are taking Freyer’s Fifty/Fifty project to the Tate Modern in London as part of the Tate Exchange program. VCU will sponsor another still-unannounced exchange associate in 2019. Last year, the Tate’s department of learning began offering weeklong workshops with partnering art universities and institutions at its Liverpool and London institutions.

For Fifty/Fifty, Freyer and his team will present “Free Ice Water” and “Free Hot Coffee,” which includes the Coffee Bike. “Free Hot Supper,” is a free dinner determined by end-of-the-day leftover food from a local market.

Also, Freyer and composer Pete M. Wyer’s song, “One Foot in Front of the Other” will be performed by a choral group from Recovery Connections, a treatment center in Middlesboro, England. Earlier, Freyer completed “Coffee Roast,” a collaboration with the Tate Roastery that produced a coffee blend selected by people in recovery. That blend will be distributed from the museum and a coffee bike in South London, which houses recovery groups such as Pen People and the Slam Recovery College.

“As we take the bike south, we run into real Londoners” Freyer says. He will distribute tokens for the dinner at the end of the week.

After the exchange at the Tate, Freyer travels to Middlesboro for a two-day conference on collegiate recovery where he will generate another coffee roast and christen a new Coffee Bike that will be operated by students. There’s not a collegiate recovery culture [in London] yet, explains Freyer, although New Castle University ran a pilot and are starting a program in Middlesboro.

Freyer, who recently traveled to Sweden to share his ideas, hopes that more universities and recovery programs will replicate his projects. Then others might echo Freyer and Wyer’s lyrics:

“Come, walk with me/I’ll show you what I see What I’ve lost along the way and what I’ve found If you walked in my shoes/I wonder what you’d choose now This life is not so easy, and everybody needs a little grace sometimes”

“Fifty/Fifty” runs at the Tate Modern in London from June 26 to July 1. For information, see tate.org.uk/visit/tate-modern/tate-exchange.