by Hilary Langford and Brent Baldwin 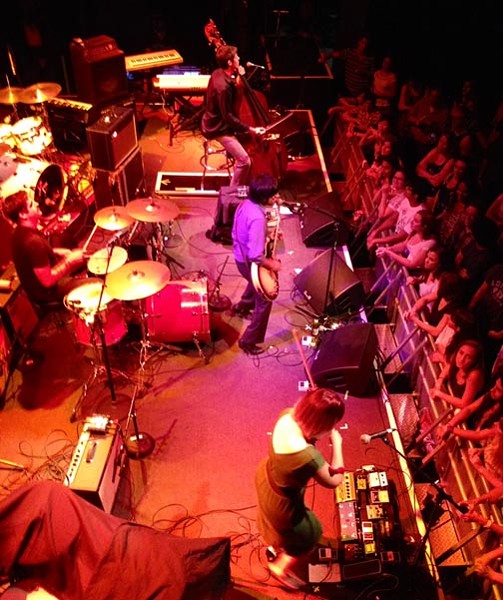 Tyler Williams
The Head and the Heart

We've learned we have the opportunity to see so much of this country and the world, so don't just put your head down and stare at your phone all day. We always try to plan out little stops in-between shows at places like Stonehenge or Manley Beach in Sydney.

Pro tip: Treat your body right. If you want to play a really amazing show every night, don't drink 10 beers the night before, drink five. Maybe run a little. Stretch. Nobody does it when they're first starting to tour. You feel invincible. After six years, it adds up. Also, every Subway sandwich tastes the same, no matter what you order.

I've seen most of the world now except for Asia. I really loved Perth, Australia. ... When I was in Poland, I might as well have been an alien. No black people. No big people. That was fun. Loved the Netherlands. Loved Portugal. There are so many cool people that just couldn't have a more different life than me. Like people who raise sheep out in the hills of Ireland.

Pro tip: If you're traveling on a plane with a horn, just bring it on the plane no matter what they say. Just say, "This is what I make my money with, I have to take it on." Don't check it ever if you care about your instrument. I just have to carry my horns. Keep it with you. No matter how nice the guy seems, do not check your instrument.

Always look at what you are eating before you take a bite. At a festival in Costa Rica, I was with my friend Mario Vazquez and DJ Sharam trying to find food at a vendor before a show. We bought several pork skewers from a kebab place. A few bites in, we realized the pork was raw in the middle. We spent the rest of our evening throwing panicked glances at the Trainspottingesque portable toilet that was our only bathroom option, drinking gallons of Coke, and praying openly for a diarrhea-free evening. No one got sick, but the lesson learned was to play it safe with food on the road because no one wants diarrhea in a dirty, Costa Rican festival toilet.

Pro tip: Be flexible and as chill as possible. Things won't always go to plan and shit is gonna get messed up. Moodiness and freak outs do not belong on tour.

We sang doo-wop songs on the side of the road one time when our trailer tire blew out. That was nice. ... Always check your tire pressure.

Pro tip: Take your vitamins, pack light — lighter than [bandmate] Bob Miller — take lots of pictures, and be thankful for the opportunity you have as very few people have the chance to do what you do.

In my old band, our guitarist brought his new girlfriend on tour with us for a four-day Northeast run. She turned out to be a major psycho and he cheated on her the second night, so it was a tense couple of days. They fought the whole time except when they were drunk and hooked-up right in front of us all. From then on, the obvious was stated: no significant others on tour, which should have been the case out the gate.

Pro tip: Keep toilet paper in the van and always bring a towel. Don't take anyone you don't know all that well with you and have a nest egg for van repairs because your van will break down.

Make time for sleep! It's easy to think of touring as a vacation, but the truth is, you're working. If you don't sleep, no matter who you are, every aspect of your live performance will suffer in some way or another. A good audience will see right through you if your enthusiasm is contrived.

Pro tip: Thoughtful planning will make your experience better. Just winging it wears thin in a hurry and usually equates to a sort of "same shit different city" type of nostalgia. Figure out the things you might want to do in certain places ahead of time. It helps break things up into memorable pieces and can be useful for inspiration.

We played a show in Morgantown, W.Va., and headed back to a house of intoxicated coeds that were kind enough to host us for the night. We had to be up somewhat early the next day, but the hosts just wanted to party. It's pretty hard to just pass out in a room full of partying West Virginians. We stumbled across the easiest way to get everyone quiet, sleepy or bored within 15 minutes. A "Lord of the Rings" DVD. The vibe of the party went from a throwdown at the Prancing Pony Inn to the sleepy, dreamy world of Rivendell. Next time the party just won't stop, put in the "Fellowship of the Ring."

Pro tip: Your friends and sanity are worth way more than any sold-out show, press opportunity, or fleeting compliment from a rock star. If you're not having fun, consider shifting your energy, heart, passion and time elsewhere.

Once, our van got stuck on a major highway high in the Rocky Mountains. Shortly after navigating through a terrifyingly windy thunderstorm, complete with hail and falling rocks, we could go no further due to a mudslide which covered the entire highway. Our guitar player had to dig a path through the mud using our merchandise cart as a makeshift shovel. After an hour of digging, traffic was able to continue. Expect the unexpected and consider keeping a few episodes of "MacGyver" on hand for some practical survival tips.

Pro tip: Be serious, but never take yourself too seriously. There's a fine line there. People may heckle and throw open bottles of bodily fluids, soaking your clothes. Don't get angry. Use it to your advantage. Return a smile to the sea of middle fingers and play better than ever. Finally, never take for granted how fortunate you are to be able to play music for people who care enough to listen.

I probably learned the most from touring with Suicidal Tendencies. I learned a lot from how Mike [Muir] sings — we share a similar style. It was very humbling. They're great guys. ... I burn my voice out a lot. I've been to voice coaches and they tell me it's just the style, especially when you play over 200 shows a year. I'm trying not to drink too much on this tour [with Anthrax]. You gotta pick your battles. Once you get on stage, adrenaline kicks in. When the audience is feeling it, that's a whole 'nother adrenaline rush.

Pro tip: We did a show with Malevolent Creation in France once. They had all this blended black licorice and were chugging that to get their voices back. I tried it and it kinda worked. But people have their fail-safe that is almost like a placebo effect. ... Instead I tell people, really, you gotta warm up and if you're a frontman, you gotta sleep. You gotta get rest. Don't let anybody wake you up for some bullshit.

I was there at the US Festival [1983], side of stage watching the Clash. But none of us knew, including the band, that it was their last gig. I was giving them nods, singing along with my favorite songs, collar turned up, sleeves rolled up like them — all of us playing James Dean in the sun. One of my most glorious days, really. Just amazing.

Pro tip: We went on tour with Talking Heads ["Remain in Light" tour]. After every sound check, David Byrne came back and asked if there was anything we needed, was anyone on crew giving us a hard time, was [there] anything he could do to help? Every single night. We were so impressed and we always remembered that. So next tour we took a young shy band that had just signed to IRS records. And we did the same thing. We'd go to their room and ask Michael Stipe and guys from R.E.M. if they needed anything. I bumped into Mike Mills years later, and he said they started doing it as well for their opening bands. So really we were just passing it down the line.

I now have a custom-made case from a company called Mono that gave me an endorsement. The guitar player from the Roots turned me onto them and put in a good word for me. It's sweet, it's like a backpack that holds two guitars and my laptop, and that always goes with me. Usually the [flight] captain is cool about putting it in his closet.

Pro tip: I have [flying] down to a science. With technology now, I have all my airlines on my phone and mobile boarding passes. You can get onboard first. So touring is not as much of a pain anymore.

I got the Blondie gig from having been friends with [guitarist and co-founder] Chris Stein. He had seen [Richmond band] Unseen Force on one of our rare tours. In a freakish coincidence, we were playing in the middle of a cornfield in Kansas and he happened to be there.

Pro tip: Don't carry any books, take two pair of jeans only, and only enough socks and underwear for how long you're gonna be out. Show up on time, in tune and sober, and you're already halfway to success.

1. Make sure you can live out of a college-kid-sized backpack for three weeks.

3. Bring a polyester shirt and pants you can wash in the basement of hotel rooms and hang up to dry. There's no cotton so they dry in 25 minutes.

5. Don't be afraid to stop by a Dollar General and get a bag of socks. You're gonna need more socks than you think.

6. Don't tour with more than two pairs of pants — it's a waste of space.

7. You only get one pair of shoes on tour.

8. Always bring earplugs, because sometimes the banter on the bus gets so annoying you just want to check out. And your iPod battery is dead.

The Hackensaw Boys just recorded a live album in Holland, which they'll have on sale at their two-set concert at the National on Friday, April 26. Show starts at 8 p.m.