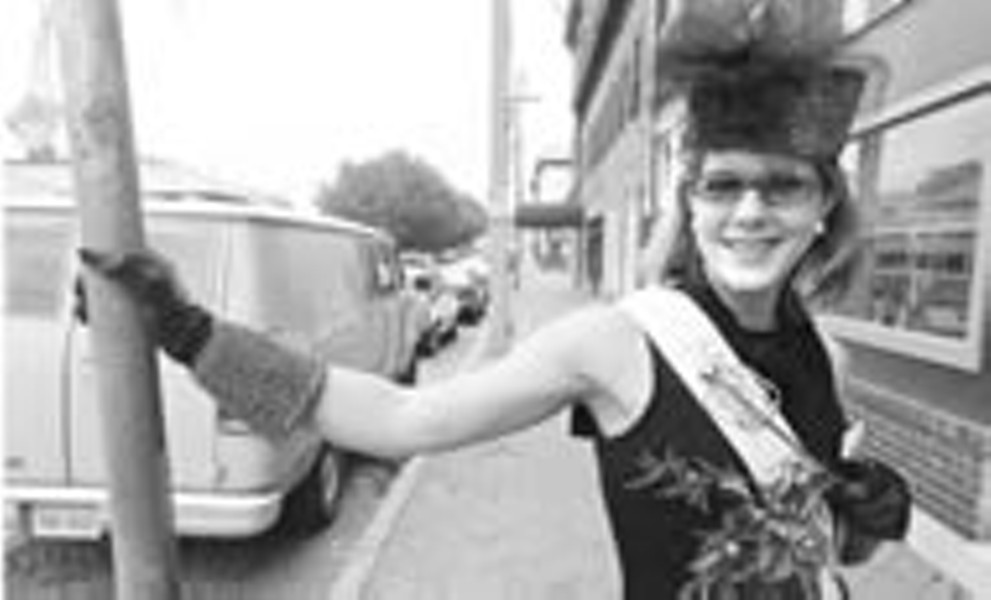 She is a former elementary-school teacher. And as the newly dubbed Miss River District, she is charged not so much with defending her title as with promoting the area and The River District, a business group that wants to see the area flourish.

Last week, the residents, retailers and vendors who make up the River District group annointed her, as a kind of mascot, to help spread the word of the new solidarity throughout Shockoe Slip, the Bottom and the Canal Walk, and of events taking place around the Farmers' Market.

What could be better than a beauty queen to promote a region? It's clear Miss River District relishes the gimmick.

"People should look for me all over," she says. "They need to come downtown and just stay here."

At this, Kathy Emerson, director of the 17th Street Farmers' Market and "chaperone" to Miss River District, smiles approvingly. Emerson says the role is a reprise of the title of Miss Farmers' Market, an annual contest that took place here in the '70s, but like much of the area, fell into dormancy. Eventually, Emerson says, Miss River District "will pass the whimsy and the scepter."

It is tedious, endless work. Miss River District plans to make numerous public appearances and pass out information about the River District at things like the 3rd Annual Brunswick Stew Festival on Nov. 2 and the lighting of Celebrate Illuminate on Dec. 6.

But today, the reigning queen basks in her debut. She doesn't appear a bit nervous. Her assignment, at least for now, is to play the part of a campy token. The idea, she says, is to get people here and get them talking. "Is she important or is she a joke?" she asks.

She waves to passersby, wearing her sash and holding a strand of wildflowers. "Welcome to the River District," she calls out to them happily. With her other hand, she points to her smile and asks if her lipstick needs freshening. It doesn't.

"This might be the most exciting thing I've ever done," she says. —Brandon Walters