A new anthology, “Lingering in the Margins,” features Richmond poets of all levels in honor of National Poetry Month.

Springtime feels as good a time as any to celebrate poetry.

It's almost National Poetry Month, which takes place every April. Many people's senses begin to feel re-engaged as the warmer weather returns, the flowers begin to bloom and the days begin to feel longer and more open to life.

Of course, long bleak winters are good for poetry, too.

"Lingering in the Margins" an anthology about to be published by Chop Suey Books Books, features the work of nearly 50 mostly Richmond poets, from amateurs and first-timers to veteran published poets and even a few former state poets laureate. The idea for the book started with River City Poets, a supportive community of local writers that meets for bi-weekly critiques and workshops.

"I found that that there were a lot of poets who didn't quite find their space in either the spoken word scene here, which is very vibrant, or the academic scene," says Joanna Lee, a former James River Writers board member who founded River City Poets at the end of 2010. "VCU has a great creative writing program, but there are a lot of people kind of in the middle."

The poetry anthology is its first publication, she says, which grew out of a workshop to help poets "get their foot in the door" and become published. The editors of the book, Lee as well as Judy Melchiorre and Marsha Owens, put out an open call and were shocked at the wide and varied response, receiving more than 200 submissions from all levels of talent. They had to do some hands-on editing for about a quarter of the poems, Lee says.

María Badillo, whose haiku about Ellwood Thompson's Local Market in Carytown is featured in this issue, says that she has experienced total support and inclusivity within the local poetry community for five years.

"This city has provided sanctuary and inspiration for me to deepen my practice, allowing me to hone my craft utilizing all that I learned during my graduate studies in London," she says. "In honor of this creative presence in RVA, I set my poem in a space where artistic expression truly seems to linger in the air."

In the book, her work gets equal billing alongside a couple poems by recent Virginia poet laureate Ron Smith, a longtime teacher in Richmond. Smith says he was asked to submit a poem for the project and that the poem Style Weekly chose to include, "Local Color," has been in his file for decades.

"I played with it a little bit. It's an exercise in cliché or stereotype you could say, both the Deep South Baptist preacher and the poet," he says. "Many poets have said this, but a poem is never finished, it's merely abandoned."

Having judged poetry contests, Smith says that he enjoys all kinds of poetry, from "uptight formalism to wild free verse, colloquial slangy stuff and more traditional, allusive stuff." He's known poets who have bitched about the concept of National Poetry Month, he says, but mostly they're ambivalent.

"It's like Black History Month if you're black: Oh, thanks, you threw us a bone," he says. "Every month is poetry month for me."

This is the eighth book that Chop Suey has published, and owner Ward Tefft says that, while many local writers approach it seeking publication, all of its books have grown naturally out of relationships with the authors.

"A lot of these are poets that we've worked with over the past decade," Tefft says. "We feel honored to attach our name to such an awesome and varied collection."

Considering the poetry scene at large, Lee says that one way the community has grown of late has been the increase in untraditional venues asking them to read.

"I've been really encouraged by being welcomed to new venues and spaces. Venues have reached out to us, for example Strangeways [Brewing], or Blue Bee Cider," she says. "It's not just poets or literary types who come out. That's a really positive sign as far as the mainstreaming of literature and the performance side of poetry."

Here are just a few of the poems from the 120-page book, "Lingering in the Margins," which will be on sale to the public at a book launch on Tuesday, April 9, at Patrick Henry Pub and Grille (see sidebar). The book costs $15 and will be available at Chop Suey Books or through its website, while local bookstores can order it wholesale through Ingram.

All morning we clamber about the Reedy Creek boulders
with sticks and plastic gloves, fishing up Cheetos bags and soda cans,
beer cans and ale bottles, silvery squished water bottles, mud-smudged
Minute Maid juice bottles, gallon milk jugs, a motor oil bottle;
a cell phone, six dead tennis balls, blobs of styrofoam,
chunks of plates, chipped cups, enough ripped styrofoam crockery
to feed the fast food 5,000; candy wrappers, pill bottles,
cigarillo sleeves; wotsits and scraggle-bits
of siltspattered, waterlogged, sundried sundries:
plucking them from the chug of water, prying them from the slick
sly crannies, picking them off the pebbles; until we have stuffed
a kitchen trash bag each with the stuff, as our plastic gloves rip,
and water creeps in under the cuffs; until we have dumped
our caboodle of it in the supercans and we are free,
mostly, to gawk at the loveliness of the park.
A blue heron, fishing back behind the water lilies.
A bluebird among the river birches.
A summer tanager we mistake at first for a cardinal.
The geese and turtles, the robins and sparrows,
the ducks, phoebes, finches, the dragonflies.
The woods; the creek; the lake: the covert and grubbing
mass of them. From the pullulating slither
of tentworms in their see-through sun-creels to the flung-back
black of a grackle's wings in flight, the dizzy blue glower of its neck.
From my hands hanging filthy to what empties back through me,
in this hodgeplash of afterimage, as my breath unhuffs.
My lament and hymn of us in its stutter and swirl.

Kannemeyer's writing has appeared in The New Virginia Review, Rolling Stone and Fiction International among many publications.

Fire in the Bitterroots
by Jo Bowman Kennedy

At midnight
after the smoke had drifted
into the valley, we could see
the mountainside erupting in patches
of orange plume,
claiming hemlock, spruce,
cedar and pine.

In the summer drought
everything is on the verge of extinction,
even the garden of perennials we stand in
one foot planted squarely in a bed
of lavender and lupine, the other
transfixed in its dream of the body
becoming a flame.

Just last summer we hiked the Bitterroots,
transfixed by their beauty
and calm—rocks, snowfields, alpine
wildflowers poking out
from clumps of earth, hungry
for light and air and sky.

Even then
we imagined we could hear
the taproot of desire,
beckoning us on,
calling us back. 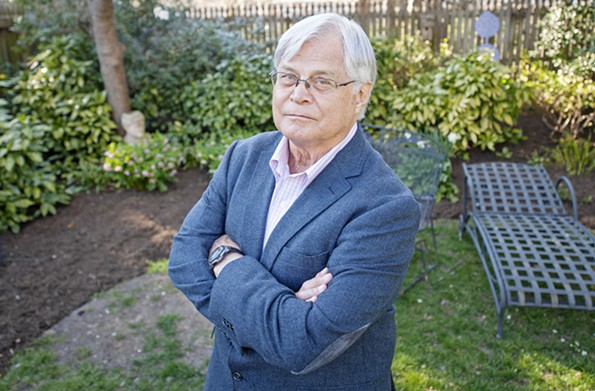 Smith, poet laureate of Virginia from 2014-2016, has been a longtime teacher at St. Christopher's School, holding the George O. Squires chair of distinguished teaching. His most recent poetry book was "The Humility of the Brutes" (LSU Press, 2017). In a few months, MadHat Press will release a second edition of his 1988 poetry book, "Running Again in Hollywood Cemetery."

Badillo is an artist who has written, filmed and photographed around the world. She earned bachelor's and master's degrees in digital media and creative writing in London and you can follow her at cinemaria.org.

The summer Raven mastered the foot-shifting rhythm of Double
Dutch, learned to cornrow the Afro of long-lashed Eddie, who
was finer than any Jackson, she discovered the magic of fitting in.
A fragile gift of shared giggles and whispers, borrowed lip gloss,
new big brothers. A neighborhood crew. The intoxicating air of
an inner circle rivaled grandma's sweet gardenias. She belonged.
She belonged. She belonged. Nothing for her 12th birthday could
top that. One night at summer's edge, her girls stormed off in a
backbiting huff, leaving her alone near the basketball hoop ringed
with guys in soaked T-shirts, grooving to beats spilled from an
oversized radio. Moving to the funky rhythm, Eddie eyeballed
Raven. She never felt prettier. In front of his boys, Eddie stood,
flashed his chiclet grin under the street lights. "Hey, let's rape
Raven!" he said, swatting a lightning bug. Someone turned up
the radio. A wave of bodies swept her, spread-eagled, to the
corner house of the old white lady afraid to come out since the
neighborhood changed. They dropped her on the landing above
the concrete stoop, scraping her thighs and elbows against the
makeshift bed. Eddie jumped on top, his sour breath heavy and
fast. He dry-humped-grinded-groped. More hands took turns
violating her breasts. Boys with eyes no longer recognizable.
Raven stopped looking when Eddie started unzipping her shorts.
"Let her go now!" The old lady thundered from behind her iron-
barred window, a black receiver pressed to her ear. Startled, they
scattered like roaches. "We just playing," Eddie hissed over his
shoulder. Raven stood up waist-deep in bewilderment, skin
scraped, bra broken, alone. Smiling, Eddie watched from across
the street. "Cantcha take a joke?" Raven couldn't speak. She
raced home wobble-legged, changed her top and shorts. Waited
20 minutes before sitting outside on the front steps trying to
listen to crickets chirp as if nothing had occurred, having not
uttered a word to her parents. Too afraid of what would happen
to her friends.

An award-winning journalist, Farmer's work has appeared in The Washington Post, Richmond Times-Dispatch and Publisher's Weekly. Her fiction focuses on girls advocating for social justice and she is currently completing a debut young adult novel.

My cat calls all visitors intruders.
Asks to be notified when someone
wants to stop by. Suggests that I retreat
to my study, inform anyone who visits
that I have a dire need to create.
If someone shows up unannounced,
she ducks behind a counter, crawls
on the floor to the nearest closet,
waits for the squeal of retreating tires.
My husband claims that she has
a poet's mentality, the spirit
of a hawk longing for the next fix:
fish-spiked treats, a nap laced
with slithering lizards and gold-
finch wings. He argues she dreams
of words dicing air like sassy
commands, greedy for attention.
He insists she has a loner's spunk,
the intensity of a philosopher
in the grip of a tenacious thought.
He says our cat aims for solutions
to nature's ills: more finches,
wrens, grasshoppers to feed on
to keep the planet orderly.
Asleep in the curvature of my feet,
she rests in solitude while I carve
sentences that rattle and whine,
spiral like a swarm of bees.

Kreiter-Foronda, Virginia Poet Laureate emerita, has co-edited three anthologies and published seven poetry books. Her work has been published in many journals including the Florida Review, Kansas Quarterly and New Virginia Review.

River City Poets Events in April
All events are free and open to the public.

Tuesday, April 9: Book launch at Patrick Henry Pub and Grille
"Lingering in the Margins" launch celebration. Includes readings from the anthology. Celebrate with a signature cocktail or reserve space for dinner. Books will be available for sale. 6 to 8 p.m.

Saturday, April 20: Chop Suey Books readings
Selected readings from "Lingering in the Margins" as part of RVA LitCrawl. 6:30 to 7:30 p.m.