Three local businesses join to open Market on Meadow in the Fan. 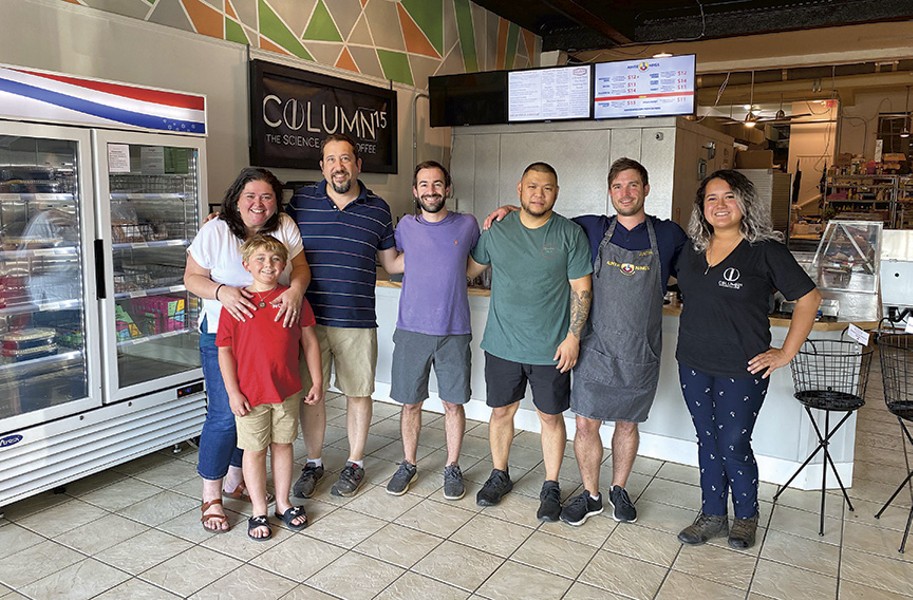 Frederico Enriquez, founder of Philippine food truck Auntie Ning’s, is finishing up some last-minute Friday morning shopping in advance of the annual Carytown Watermelon Festival. Before this, his truck will be at the Saturday RVA Big Market in Bryan Park, serving up handmade lumpia and pancit and bistek to hundreds of hungry marketgoers.

In his downtime – when he isn’t working his full-time government job – Enriquez will be popping into his recently opened first brick-and-mortar venture, Market on Meadow, to oversee weekend lunch and weekday dinner operations.

Enriquez has partnered with some other like-minded, nose-to-the-grindstone friends and entrepreneurs to create a space that is part commissary kitchen, part retail market, part coffee shop and part grab-and-go restaurant.

Market on Meadow – at 719 N. Meadow St. in the old Red Cap Patisserie space – is the brainchild of the Auntie Ning’s crew, coffee roaster Column15 and Italian market and catering company Polpetti.

Enriquez, Column15 owner Victoria Goldsby and Polpetti husband-and-wife team Peter and Georgia Riccobono connected about three years ago when they were all working the same farmers market circuit and all ended up in Hatch Kitchen. When they left Hatch to pursue Market on Meadow, Goldsby says, “It felt like graduation day.”

The Market is now open Wednesdays to Mondays from 7 a.m. to 9 p.m. and has both made-to-order items like lattes and Italian sandwiches, as well as retail offerings including take-and-bake Polpetti chicken marsala and vodka rigatoni and bags of Column15’s sustainably sourced and roasted coffee beans.

Each company has an everyday menu and a specialty menu. For example, the everyday menu for Column15 has nitro cold brew, which is easy to access from a keg behind the counter, while the specialty menu will feature more complex espresso drinks which will need to be prepared by a Column15 staff member.

The hours for each menu are intuitive: Column15 can serve you your fancy cuppa from 7 a.m. to 3 p.m. every day while it’s open, while Polpetti can make you a sizzling hot Polpetti pocket, stuffed with sausage and peppers or meatball Parmesan, starting at 11 a.m. – you know, around lunch time.

Customers who stop by the market will find a slew of retail items on sale from other local vendors like Together Bar, founded by a Richmond area veteran who suffers from post-traumatic stress disorder and wanted to help others; Fat Rabbit Cake’s granola; AR’s Hot Southern Honey; Crescent Simples; Glow, which creates all-natural hemp extract products using hemp grown on its own farm; and Start with a Stick live edge wood furniture.

Georgia, who has more than 10 years of experience in a managerial position at Whole Foods, is a whiz at sourcing and highlighting these hyper local businesses. “Especially right now with people recovering from COVID, there are so many small startups that are just trying to get out there,” Peter says.

He and Georgia know from experience how difficult it can be to start from scratch. They founded Polpetti Italian Market in 2016, but their business didn’t really take off until last spring, Georgia says.

“Quality is a huge focus for me. If it’s not right it’s not worth doing,” she says. “We developed quite a following at the market with our customers and we were curious as to how this [Market on Meadow] would play out. It will be interesting to see what the overlap is.”

While each company has a distinct business plan, its own staff and varying hours on site, they’re all ready to step up and fill in for their partners at the drop of a hat.

“We’re still figuring out the point-of-sale system,” Goldsby says. “And recently an order came in for Auntie Ning’s when they weren’t here.”

Within minutes Goldsby had alerted Enriquez, and one of Goldsby’s cross-trained staffers figured out the order. Goldsby darted off to pick up an Auntie Ning’s staff member and within the hour the oven was fired up and orders were being fulfilled. “We rotate in and out as we need, we all help each other,” Goldsby says.

A College of William & Mary grad with a background in organizing campaign trails, Goldsby says she took those skills – “Being in charge of so many people in a short amount of time” – and applied them to starting her own business.

Column15 just opened its flagship, a 3,000-square-foot coffee shop and roastery in Williamsburg, specializing in a variety of ultra-smooth nitro cold brew with flavors ranging from snickerdoodle to butter beer.

“This is an expansion of our existing setup,” Goldsby says of Market on Meadow.

She notes that Column15 has been bopping back and forth between Williamsburg and Richmond farmers markets since its 2018 inception. “We finally got that [Williamsburg] storefront and we already had so much going on we almost didn’t commit to Market on Meadow,” Goldsby says. “But then again, there was not much reason to say no. The results were totally going to be worth it.”

Brooklyn native Peter, who has three decades of cheffing and food service management under his belt, says that they miss their Hatch friends, who inspired them daily. “But the Hatch managers said, ‘You know, you’re the perfect example for us, we’re glad you’re leaving,’” Peter says.

Four months ago, when Enriquez asked the Riccobonos and Goldsby if they were interested in splitting the rent three ways on a space in the Fan, Goldsby says it was all pretty “nonchalant.” “We were like OK, we’ll take a tour and check it out,” she says.

“It went from, ‘what do you think’ to ‘Let’s put together some lease terms and a PowerPoint presentation for the landlord,’” Peter laughs.

As they find their footing, the companies hope to expand their current offerings. For Enriquez, that looks like adding more vegan items to the menu, experimenting with substituting out oyster and fish sauce in his vegetarian dishes.

For Polpetti, Peter says once they get a food slicer in, it’ll be able to whip up a variety of Italian, made-to-order sandwiches with New Jersey-sourced bread. Goldsby hopes to be able to continue to introduce drip coffee drinkers to the nitro cold brew world.

“We’re really focused on developing a relationship with all the people in the neighborhood,” Georgia says. “We can only be successful if we’re all successful.”

Market on Meadow is open from 7 a.m. to 9 p.m. Wednesdays through Mondays. Because there are no designated bathrooms or parking, the market is to-go only.