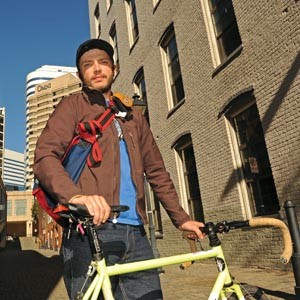 Among North American bike messengers, who's the quickest, brightest and best? Stu Louder may be able to make that claim. The 25-year-old Richmond resident just won the 2010 North American Cycle Courier Championships, which took place in Atlanta earlier this month. Louder beat out about 200 bikers during two days for the title.

A full-time bike messenger, Louder picks up and drops off letters, bills, receipts, court documents, printing proofs and other packages in downtown Richmond as one of seven bike messengers operating here, a diminished corps in an age where electronic communication is the norm.

Riding his main work bike, a grass-green All-City Nature Boy Cyclocross single-speed model, Louder averages between 20 and 30 jobs on busy days in an area that extends from roughly from the Boulevard to Chimborazo Park.
Louder is quick on selling points — bikes are “super-efficient” with no pollutants, he says — and he's participated in more than 30 regional bike messenger races known as “alley cats,” which feature challenges such as work simulations and scavenger hunts, in Richmond, Washington, Philadelphia and New York.

Bike messenger competitions are part athletic races, part raucous family reunions. A few years back, Louder organized his own Scrabble-inspired races in Richmond, with bikers picking up letters for the highest-scoring word.

The national competition is the big time for both competition and partying: “Four days of brutality, beer, hard work and a lot of fun,” as the championship website describes. “Ya'll ready to ride dirty?”

Louder roved a closed course of brick, pavement and dirt that shut down part of the Atlanta-Fulton County Zoo, picking up and dropping off 36 packages at different points. Bikers could travel only in one direction and could drop off boxes in any order, but had to pick them up in order — a juggling act that meant extra laps for the less organized.

Louder quickly emerged as a top-three leader in the beginning of the race and before long the two other frontrunners lost steam. Louder was in the lead.

Then it happened: a flat tire. Louder coasted to the next stop, where a pump revived his bike, but “who knows who's passed me,” he recalls thinking.

He kept going. At some point, volunteers at package stops began telling Louder he was the first to arrive. After checking to make sure he'd made all his stops, Louder raced to finish first — completing all 36 jobs in 2 hours and 25 minutes.

“I'm the fastest, hardest-working messenger in North America,” he boasts.

He also has hustle: While in Atlanta, Louder helped convince the bike-messenger community to bring the 2012 national championship to Richmond.