Richmond’s Role in Slavery: Generations Away From Freedom 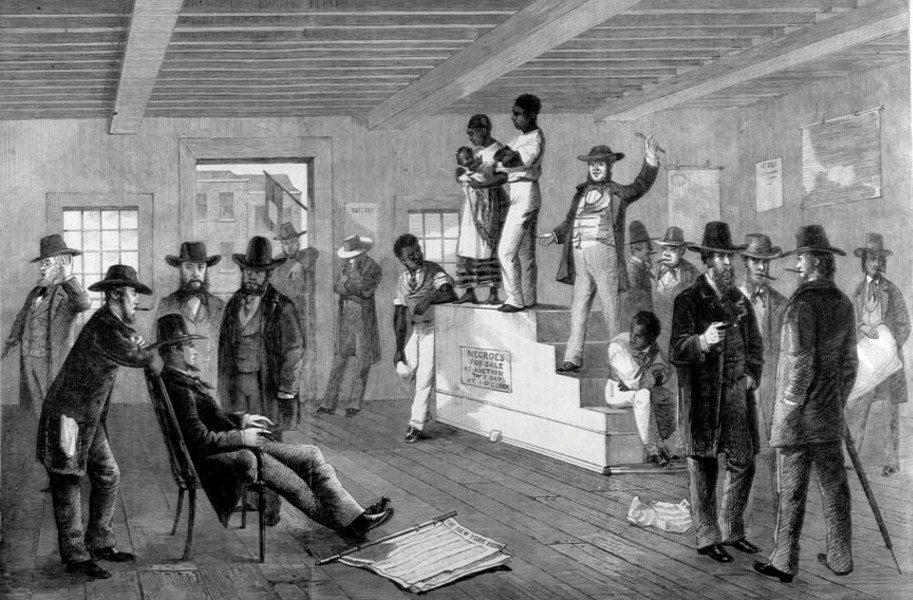 An 1861 sketch by London News correspondent G.H. Andrews depicts a man and woman with a child on an auction block, which accompanied an article describing slave sales in Richmond.

In June 2013, President Barack Obama visited Goree Island in Senegal. The country’s coast was one place where traders gathered slaves for shipment to the New World. The first black president and his wife, Michelle Obama, were photographed gazing from a portal called the Door of No Return that overlooks a nearby bay.

The door is a good place for people to remember and memorialize what happened, but it’s unlikely that it’s a place where such horrors actually occurred.

What does history tell us about what happened in Richmond? And did slaves from Africa literally come ashore on either bank of the James River here?

Virginia history tells us that if they did, it was a rare occurrence. That doesn’t mean it didn’t happen. It’s likely that the slaves who came to Virginia landed in eastern counties directly on or near tobacco plantations on the waters of the Chesapeake Bay and the wide ends of the colony’s numerous rivers.

They walked off the slave ships, got sold on the river banks and were put to work. This happened mostly in the early to middle 1700s, before Richmond existed except as a frontier outpost. By the time the state capital moved here in 1780, the great mass of slaves was already in Virginia.

The seminal work on the trans-Atlantic slave trade was the 1969 book, “The Atlantic Slave Trade: a Census,” by a scholar named Philip D. Curtin. He argued that about 10 million people made it to the New World after being enslaved in Africa. Some scholars contend that the number is closer to 15 million.

Of the enslaved people who came to the New World, the ones who came to British North America amount to about 7 percent or less. The great majority went to South America and Caribbean. Curtain estimates that about 500,000 people came to British North America. At the time of the Civil War, the number of slaves in the United States was about 4 million, which comes to roughly an eightfold increase from those peak importation times ending in the middle of the 1700s.

Gabriel and his compatriots who plotted an 1800 slave uprising in Henrico County and Richmond probably were at least one and perhaps two or three generations from people who were born in Africa.

As eastern Virginia plantations became less productive in the late-18th and early-19th centuries, the planters and their heirs sold their slaves to make money, to make ends meet and to divide estates.

Michael Tadman, in the 1989 book “Speculators and Slaves: Masters, Traders and Slaves in the Old South,” says that owners easily sold their slaves to traders who walked by the plantations and attended county court days.

Tobacco fields with exhausted soil meant that the slaves were the most valuable things eastern Virginia plantations had. So how did these slaves move in the 19th century? It’s likely that they walked, in a line known as a coffle. From the eastern part of the state, cuffed hand-to-hand, or chained or roped at the neck, or both, they came from the Northern Neck and Middle Peninsula and other counties north and east of Richmond.

After arriving from Africa, say in 1750, a slave was at least five generations from freedom. There’s time in a single line of descendants for a dozen or even more sales. The captive from Africa is sold on the riverbank, and then sold again to a neighboring plantation. The first generation’s child of 12, born in America, is sold farther west in Virginia. The child, now 18 and a man or woman, is sold even farther west in Virginia. That’s four in two generations: Three more generations to go. And that’s only a single line of descendants. A slave who came ashore from Africa likely had dozens, if not hundreds, of descendents. A majority of those sales of humanity probably were sold along paths or roads in the countryside, rather than at an urban slave market.

If a trader bought slaves in the eastern part of the state, why stop in Richmond when the destination was Georgia, Alabama or Mississippi? This would have saved money and carried the commercial potential of buying and selling human beings all the way, either directly on plantations or in other towns and cities. As Tadman writes, “speculators normally used overland ‘coffles’ (mostly chained or roped together) rather than the coastal shipping facilities which became well known from the New Orleans route.”

That’s where Richmond comes in. Shockoe Bottom was a major source for the New Orleans trade, in which slaves destined for the Louisiana sugarcane fields were sold. Especially backbreaking work made the demographics skew 60 percent male, Tadman says. Many of those slaves were transported by ship to New Orleans.

That’s not to say that the slave market in Richmond was small. Scholar Philip J. Schwarz writes in a brief biography of trader Hector Davis on the Library of Virginia’s website that Davis’ business alone in 1859 made more money than the value of all the flour shipped from Richmond that year.

Flour was a major agricultural product from Virginia in the 19th century and its source was mainly the huge mills in Richmond. Davis, although a significant trader, hardly was alone in Shockoe Bottom. There were dozens of traders in the neighborhood. This makes it likely the second-largest market in the country behind New Orleans.

Still, those markets, which had a strong link to the sugar plantations, paled in comparison to the hundreds of traders in the countryside who traded slaves to the south and east toward the cotton plantations.

We may never know the full details of this tragic moment in Richmond’s history. What do we do about this?

Just as President Obama and his wife gazed across a bay and imagined slaves getting on ships bound for the New World, so too should people walk the Slave Trail, see the African Burial Ground and remember the hundreds of thousands of slaves who came from Africa, as well the million or so who were sold from the Upper South to cotton and sugar cane country.

Descendants of slaves walk the trail here because they are here. So should we all. S