Richmond's Fishing Stories: Finding Peace at the End of a Line

On a littered bridge, as the cars roar past, there is peace.

By a still green canal, in the shadow of an old paper plant, there is peace.

And in the foot-flattened grass by the river, near a trash can that smells like yesterday’s bait, there is peace.

Fishing’s not really about fish, after all. It’s about letting time slow down a little. It’s about soaking up the summer. It’s about finding that in-between place where you can just be for a while.

On a warm Friday evening, we spoke to a few of the fishermen and -women who try their luck on the James River downtown, on the Mayo Bridge and by Ancarrow’s Landing. Some have been casting since childhood. Others have yet to catch their first fish. But they all have found some peace. 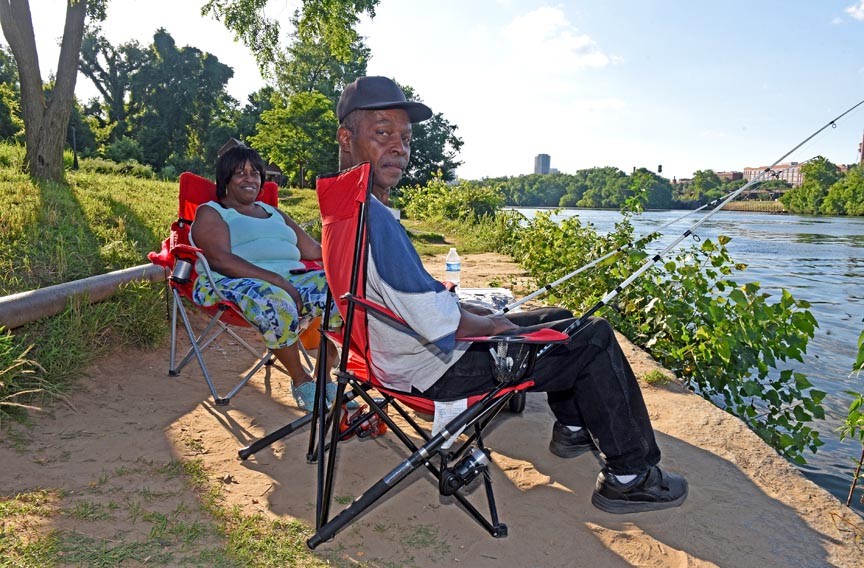 Turner, a man of few words, likes to spend evenings sitting by Ancarrow’s Landing with a pole in his hand. On this Friday, he’s joined by Lorraine Francis, who’s listening to a Celine Dion-inspired love-song mix on Pandora. “I just watch,” she says. “I don’t know what he’s doing, but I’m just sitting here listening to my music and watching him.”

How long have you been coming down here?

What are you catching?

Do you eat them?

Keep the big ones, throw the small ones back.

Why is this the best spot?

It’s not necessarily the best spot, but it’s nice and comfortable under the trees.

How long do you spend down here?

Who taught you how to fish?

I learned as a child. I just came up here on the James, fishing. Just me and the guys. Just watching the older guys, trial and error, you know.

Do you ever see your childhood friends when you’re fishing?

Have you had any bites this evening?

No, I haven’t seen anybody pull up anything so far today.

Do you have to do anything?

Just let it sit there … until it jerks.

What bait is best for the catfish?

I’ve heard some people use cornmeal, almost like fishing with hush puppies.

But when they get wet, they’ll come off the hook. And then the fish eat free.

Well, you know it’s going to be the one that got away.

Does anyone really know why fish bite sometimes?

Depends on what your bait is. And then you might get a honey hole, you know? I was down here the other day, fishing right there, and I was the only one catching. They were hitting back-to-back-to-back-to-back [snaps]. But ain’t nobody catching nothing but me. I found the honey hole.

Did people move closer to you?

Francis: See, this kind of music, and this weather, is beautiful. 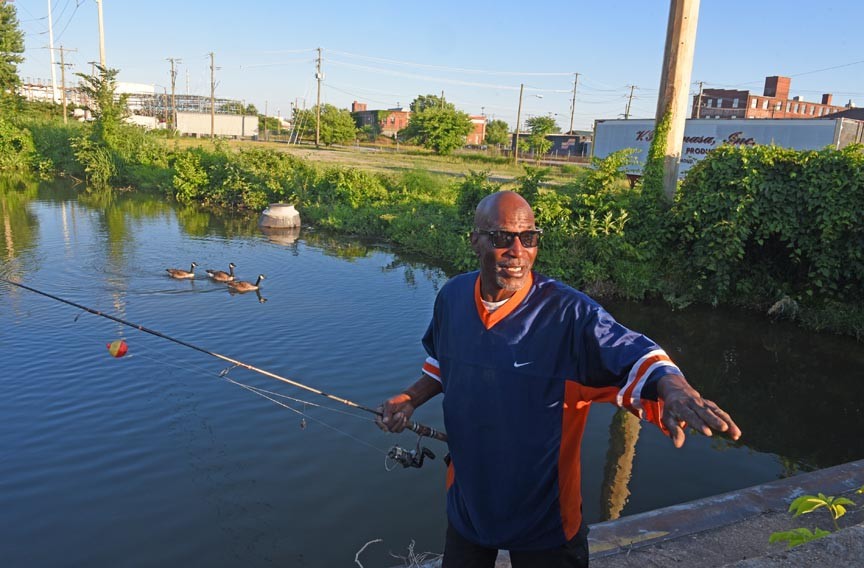 James Johnson knows the river. When he was a kid, he says, “I used to walk from one side to the other, to the paper company in the middle of the bridge to get my uncle to give me some food and then go back swimming. I know this whole bridge, just about.” This evening, he’s catching brim on the Manchester Canal.

If you were giving advice to someone, if they wanted to catch catfish, what’s ideal?

I would tell them to get some cut bait. Come get some of these brims and use them for cut bait, and you’ll catch big ones. The best place to go [for catfish] is down, right over here, and you go down by the boat landing. All the brims you want be up in here. The water stays still, here. It’s shady.

It seems like a lot of work, to catch them and then go catch the catfish.

No, all you got to do is cut them up. Cut them into pieces.

What do you love about fishing?

You don’t get lonely?

Nope. I got my music with me, I go to a store and get everything I’ll need before I go, and it’s peace of mind for me. I don’t like the arguments, fussing or nothing like that. I like to be to myself. I’m a loner. 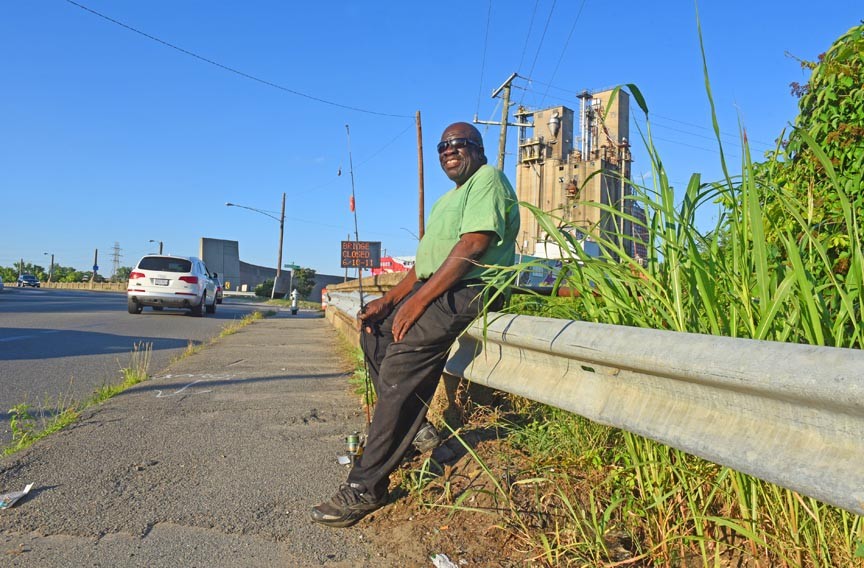 “When I first came down on the bridge, I didn’t know nothing about holding a pole,” says Gurley. James Johnson showed him the basics, and now Gurley will sometimes stay out fishing past midnight. His biggest James River catch was a 92-pound catfish.

What kind of bait are you using?

You use fish to fish. That’s what I do. I just use brim or the perch — like if you catch a perch, you use perch to catch the catfish or maybe a rockfish. Stuff like that. Other than that, you just throw a line out and just try for fish. It’s nice fishing in this river. I’m not from Virginia. I’m from Colorado Springs, Colorado.

How’d you end up in Richmond?

I married a girl — she’s from Sussex, Virginia — and we relocated here in Richmond. … I’m stuck here, so I can’t leave, you know? But I love fishing in this river here. I started fishing here in this river in 2003. From here, I’ve been fishing to the Mattaponi, the Pamunkey, Chickahominy, and I go down to West Point and Gloucester and Ocean View. I’ve been those places fishing. I love it. Since I learned how to fish, you just can’t keep a rod out of my hand.

What is it that you love so much?

The relaxation. You get away from the hustle and bustle of the job, the wife and kids — excuse me [chuckles]. You just want time for yourself? Just come fishing. That’s all you gotta do.

The water’s calm. It relaxes you, it just keeps you calm, you forget all your thoughts. Especially if you’re fussing and arguing at home, you can forget everything when you get to the water. Basically, if I had a hard day at work, and I don’t want to go home and hear nothing else, instead of coming home, I just go to the river and sit down. Might drink a beer. We come as a group. We just call each other and say, “What are you doing today? We’re going fishing.” And that’s what we do.

How do you guys know each other?

We met each other on the river. Actually, all the people that I know, that I fish with, we met here on this river. And it’s a lot of us. It might be about 10 of us right now. Sometimes we’ll rent a boat and go out. Most of the time we’ll stay two or three days. We don’t ever go down and stay one day. Might get a hotel, enjoy ourselves there, go to the water, if you get tired, go back to the hotel. Or on nights like this, bring blankets and sleep on the beach. That’s how we do. That’s it. That’s what I enjoy about fishing.

So, do you eat your catches?

Sometimes. I mostly put them back, but if somebody wants them, they can have them. I just love the fun of catching them. Especially bass — mostly bass — because they give me such a fight. Bass are such great fighters. 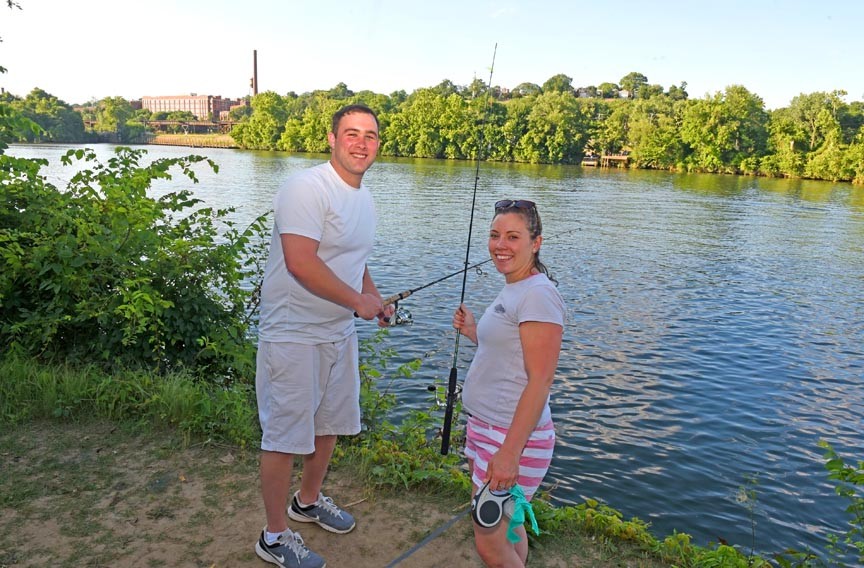 The River Lofts at Tobacco Row residents Potter and Pearce, both newcomers to Richmond, try their luck with mozzarella balls from the Kroger olive bar.

What are you trying to catch?

Potter: We actually just, like, started fishing. And his uncle gave us these fishing poles. And we have yet to catch anything, in the almost two months that we’ve been fishing.

You’ve been coming here for two months and you haven’t caught any fish?

Maybe more just like a month. It makes me really sad, because I really want to catch something. We haven’t used live bait, because this guy I work with, he catches fish left and right, and he’s always posting about it, and he doesn’t use bait. So, I’m like, “I’m just not going to use bait.” So, I guess our lures are just not up to snuff.

Lucas. Last time we were here, he rolled around in goose poo. So that was fun to clean. … So, when you guys talked to other people, did they catch a lot of fish here?

The guy we just talked to says it’s very variable. He did say he uses squid as bait.

Potter: With that, I’ve felt bites. So, I feel like they’re being ate.

So what are you going to do with it, when you catch that fish?

Potter: It’ll be really exciting. I don’t know. We may just put it back. 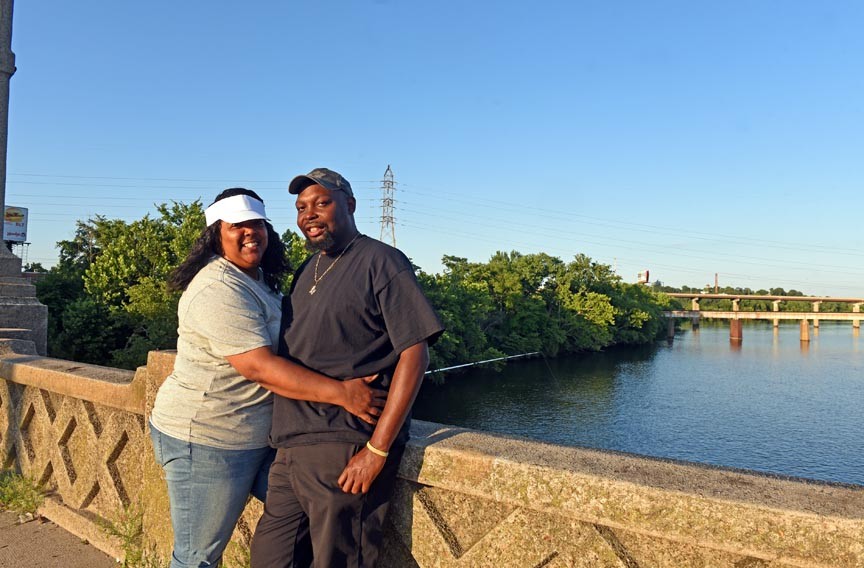 Married six years and living in Forest Hill, Hite and Watson cast their lines on the north end of the Mayo Bridge.

How long have you been coming here?

Hite: Since Sunday morning. This is our second day.

What made you want to come out and do this?

We always go home this way from work. We always see people out here, and they seem to have a good time. It’s very peaceful, especially after a long day at work. You know, it’s very relaxing. So, my husband and I just decided we were going to go get us some fishing rods. We came out Sunday morning and decided to come back again today. The weather’s perfect. You can’t beat the scenery, the sights, the sounds.

So, do you know how to fish? Do you have experience?

Not at all. We met some great people who taught us Sunday morning. They spooled the rod for us, put everything on it.

Did they give you bait recommendations?

They just said any bait. They said they like the worms.

From Wal-Mart. I don’t know what kind they were, I just got them.

Have you caught any fish yet?

We haven’t caught anything yet. We’ve had a couple bites! So, we know we’re putting it on right, because they’re taking it off.

When you catch something, what are you going to do with it?

Put it in that cooler right there. We’ll take it home.