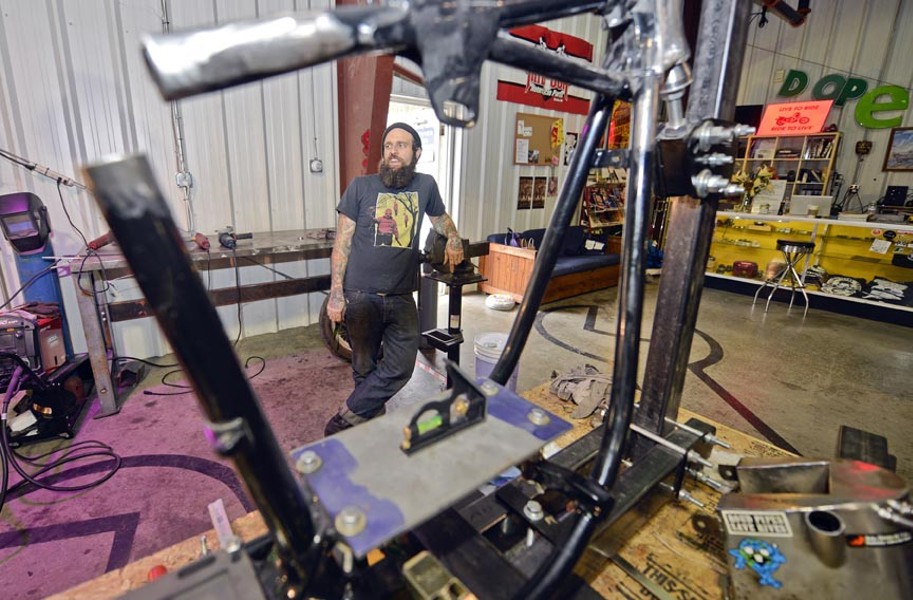 Ash Daniel Cory Manning stands inside his Engine and Frame repair shop in Shockoe Valley, where he helps motorcycle enthusiasts learn in a friendly, supportive environment.

Glam rock by T. Rex is blaring from the speakers, a Studio Two Three map of Richmond hangs overhead, and there’s a sign that reads, “I’d rather ruin my kidneys than have a smooth ride.”

The vibe at the Harley-Davidson repair shop space, Engine and Frame, is welcoming and organized, with parts behind the counter and bookshelves filled with motorcycle maintenance manuals, glossy bike magazines and the owner’s notebooks from his time in Harley school.

Pulling down a copy of “The Chopper: the Real Story,” owner Cory Manning waxes poetic about choppers as archetypal American creations, as typified by the film “Easy Rider.” It was an era “when sex was safe and motorcycles were dangerous,” he says.

From the beginning, Manning envisioned the Shockoe Valley space as a two-fer: a full-service Harley-Davidson repair shop in the same building as a nonprofit community motorcycle garage. There are close to two dozen do-it-yourself community garages scattered across the country, but none housed with a full-service repair business.

He says he was inspired to open the business and the garage after reading Matthew Crawford’s book “Shop Class as Soul Craft,” a rumination on the lost art of repairing things rather than disposing of them.

“I encourage people to come hang out,” he says, from the garage’s sunny parking lot where the shop dog Ruffie enthusiastically greets visitors. “That’s how I want the community shop to work, so at any given time, there are people here to help out others.”

He’s also offering hands-on workshops on aspects of motorcycle maintenance such as carburetors and winterizing a bike. “It’s one-on-one, so we do it together.” During the long, dark hours of the winter, the garage stays open late so people can use it after work.

One of eight motorcycle-riding board members, Laurie Lay says she sees the garage as a community asset because it provides a space, tools and knowledge to anyone wanting to learn or work on motorcycles.

“Upfront costs can deter someone from the beginning but with this concept,” she says. “You can get a bike and not have to spend more on having all the necessary specialized tools that you might use just once to adjust one part.”

Manning says bikers are almost guaranteed to return once they’ve experienced working on their bikes on a lift rather than on the floor.

“They tell me how great the lift is and I tell them, I know,” he says, laughing. Some buy monthly memberships, which provide bins for tools and parts, winter bike storage for apartment-dwellers and unlimited use — a sweet deal when a job likely will take more than 10 hours.

The goal is to make the process of working on a motorcycle more attainable by having all the tools, along with a trusted group of people to share hard-earned knowledge.

“There’s only so much you can get from watching YouTube videos,” Lay says about how motorcycles teach basic electrical wiring concepts that are used everywhere, along with patience, critical thinking skills and the importance of focus while working.

“When you get on a motorcycle that you’ve wrenched on,” she says, “your life is in your hands and in the brakes that you did or did not tighten well enough. There are few experiences in our lives that have such immediate results.”

Movie nights screening bike-ploitation films are scheduled as a way to create community by getting people to check out the space in hopes they’ll feel more comfortable and return. The garage also is taking on volunteers, both older experienced people and interns to learn the basics of maintenance, a process Manning likens to the apprenticeship of tattoo artists.

He notes that plenty of people are curious about riding motorcycles, but they don’t know others who do.

“This is a place where they can hang out and have fun,” he says. “Motorcycles make everything better, even just screaming down the road riding to work. That’ll wake your ass up in the morning. It makes you feel like you’re cheating death and that makes you feel alive.” S