Richmond's Dharma Bombs Put Some Honk in Their Bluegrass 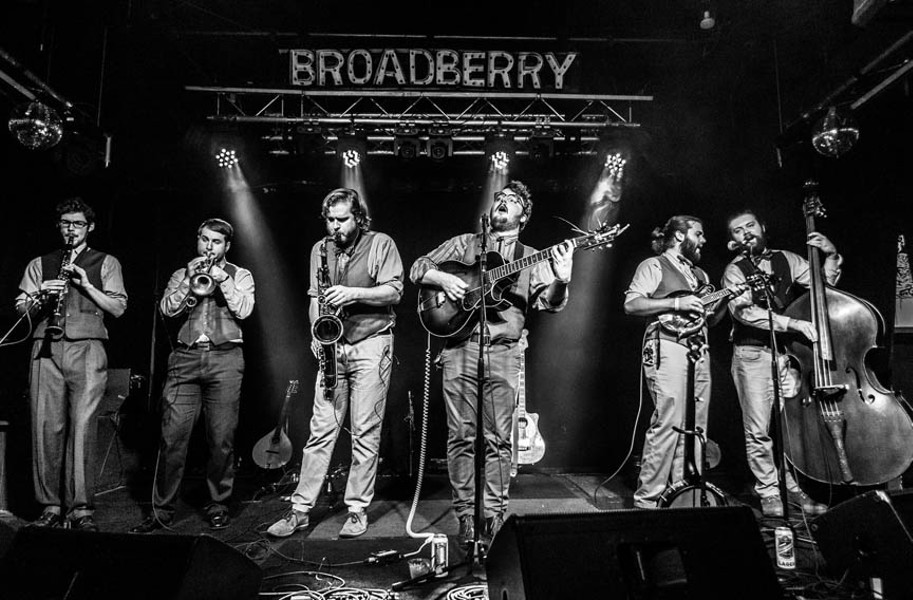 Joel Wharton The Dharma Bombs have been making a name for themselves locally with an entertaining, highly danceable mix of what they call “Appalachian Dixieland” music. The group is performing the first Thursday of every month at the Camel through 2017.

The year is starting out just fine for Trey Hall and his bandmates. His Richmond sextet, Dharma Bombs, is in residence at the Camel the first Thursday of every month in 2017.

“We think of the Camel as home,” Hall says. Known for its unique blend of old-timey musical styles, the band brings an intense energy to the stage. The goal seems to be to get the audience dancing: “If you’re not sweating, then you weren’t there,” he says.

Hall and bandmate Drew Brunson are the only founding members in a group whose lineup and sound have evolved during the last couple of years.

“Botetourt is near Roanoke. It’s banjo country,” Hall says. He touts Dharma Bombs as Appalachian Dixieland, a term that aptly describes their mash-up of genres.

Half of the members are string players, and the other half are horn players. Together they offer up classics with a twist. It’s not every day you hear such traditional country songs as “Salty Dog” in an arrangement that includes clarinet, sax and trumpet.

The band started out playing house concerts and parties, and on occasion, retirement communities. The Camel provides a sense of home for a group that sees itself on the road more in 2017.

Hall recently graduated from Virginia Commonwealth University and has joined the faculty there in the writing center. Everyone in the band has a day job and contributes financially to the music. “We are a socialist endeavor,” Hall says. “Every penny we make is going into the new record.”

The band is recording an album of mostly original material at Montrose Recording studio in Richmond with Justin Black producing.

“The first session is done and we have two more booked for February,” Hall says. “We are actually trying out a few slow tunes for this record. As a group, we feel more comfortable with faster material — the slower stuff can seem a little scary at times.”

He also serves as primary songwriter. “I might be the writer,” he says, “but as a group everyone builds the song. It really is a collective.”

Hall hopes for a summer release for the new recording on Crystal Pistol Records. The album will feature 13 original tracks, of which six are new. The band members bring their own seasoning to the mix, resulting in a style that’s loose and fresh.

Hall and Chris Gatens, who plays banjo and mandolin, performed in hardcore bands in middle school. Josh Smith, on clarinet, comes from a folk background. And, Hall says, “Clay Trinkle is our jazz guy, and Stephen Moser is our Dixieland guy.”

“We want to invite you to get rowdy with us,” Hall says. “We have songs about rambling, drinking, thinking about drinking. You won’t be bored.”

Hall refers to the group as weekend warriors, although it’s been known to play late nights on the road and still make it to work the next morning. Hall, along with Clay Trinkle, handles the booking for the band.

Hall sees Dharma Bombs playing Virginia and North Carolina in 2017, with more road dates than in the past. “We have really great fans,” he says. “Virginia has such a great music scene, and there are so many places to play where the music is appreciated. I have Gypsy blood in my heritage, which might be why I like the road.”

He hopes to get the group booked into a festival or two in the near future.

In addition to handling the lead vocal chores, Hall brings an offbeat sense of humor, evident in his stage presence and in videos like the one for the single “Sunny Always.” The band also has a healthy presence on YouTube.

The Dharma Bombs play the first Thursday of every month at the Camel. Shows start at 9 p.m. and tickets cost $5.