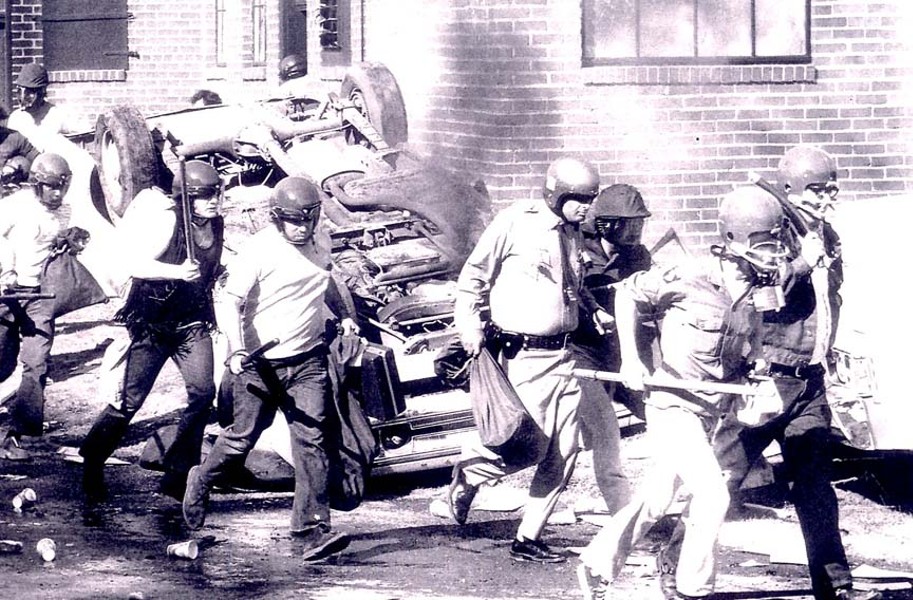 "The Back Door on Grace Street was a great live music bar. Jimmy Vaughn and the Fabulous Thunderbirds and the Nighthawks from D.C. were the first live blues bands I ever saw there. A few years later I saw Ricky and the White Boys, Lamour and Beex there — my first taste of the punk rock that was soon to come. Another great bar was the Pass on Broad and the String Factory [once called Bilbo Baggins], which later became Rockitz. There was a head shop on Broad called the Nickel Bag. There was also a store called Enter Maurice that sold really wild platform shoes like Elton John used to wear."

"I did mostly gospel shows. I didn't do any of the other stuff until I started doing radio. I booked Clarence Carter, Bobby Rush, Bobby Parker, Chuck Willis and a lot of artists like that. I put on shows at the Mosque [now the Altria Theater], but after the artists got paid, the Mosque took most of the rest of the money so there wasn't a whole lot left over, so I stopped doing shows there. You could book 10 West Lee and Ebony Island and make some money, but the most profitable and best shows were out in the country at places like the Charles City Community Center. … Sterling Harris is one of the best entertainers to come out of the city. Standing Room Only from Charles City were good too and I think they are still playing. Back then everybody had a band or a record player."

"In-between my traffic copter and morning show gigs at WRVA, I worked for a couple years at WEET, a little AM country station no longer on the air, where I did mornings and got to play pretty much whatever I wanted, including lots of bluegrass in the late '70s and early '80s.  It was there that I got to know local bands like the Heights of Grass, who introduced me to the players in this musical realm that's grown into a lifelong passion. They got to play the Grand Ole Opry twice, and along with other prominent area groups like George Winn and the Blue Grass Partners, Uncle Leroy and the Pike County Partners and Chief Powhatan and the Blue Grass Braves, frequented Ray's Cock and Bull on MacArthur Avenue on the North Side — the bluegrass club for many years. All the big names played there too, including Bill Monroe, who I also remember playing the Flood Zone in its early days in the Bottom."

"As a 17-year-old freshman at RPI (which became VCU), I met some high-school fellows my age, bass player Guthrie Kennard and drummer Jim Pendelton, at a music store in Bon Air. Being from New York City, they mistakenly felt I must have been a good guitar player, and we started a band called Stone Road. I have no idea why or how we were asked to play in Monroe Park one afternoon, but it was a huge turnout. The next day there was a photo of the band in the Richmond paper with the heading: "Band Plays for Communist Rally in Monroe Park." Guthrie had to hide the newspaper from his parents or face the wrath of his father. Shorty after that, I was in another band [Spoon River] with Finny Hughs, Donny Polard and Eddy Rowe. [We] opened for Bruce Springsteen a few times. Once when we finished our set, Springsteen's manager, a guy named Tinker [West], got up in my face and said, "You guys suck." Springsteen witnessed that exchange and later said, "Don't pay any mind to that asshole, kid. ... You sounded great."

"Just recently my buddy Huck Harris asked me if I remembered giving him three different-colored Springsteen posters for Child at Free University, an alternate school that Russ Clem started it. [Harris] was moving to Florida and told me, "I want you to know I put 'em on eBay and sold 'em to a guy in Japan for $9,000." [Laughs] I told him for another thousand, you could've gotten the artist to sign 'em."

"In the late '70s, Benny Waldbauer owned a great bar, the Copa. Wednesday was 50-cent beer night. The place would be packed with people you knew, featuring great bands like Beex. Life was good."

"I was producing a big multi-band rockabilly show at Hard Times; in fact, it might have been the second time Jonny Cecka's band Larry Joe Miller and the Rockabilly Rockets ever played here. The place was packed way beyond capacity and Crazy Jimmy Garthoff was doing this really freaky dance in the middle of the bar. The owner, Wade, said to me, "Hey, I want that guy outta my bar." So I go over and say, "Hey Jimmy, I got a huge favor to ask you, would you please help me out?" He said, "Sure bro, whatcha need?" I say, "Jimmy, the owner told me I had to throw you out, but I told him the only way you were leaving was if you threw yourself out. So, would you please — as a favor to me — throw yourself out?" Jimmy got this fiendishly delighted grin on his face and then put himself in a violent headlock and began yelling: "OK, that's it for you, you're outta here! Make way, I'm throwin this crazy motherfucker outta here!" All the while he's punching himself, falling into tables, knocking over beers, making strange whooping noises [like] a police siren and throws himself out the door by the scruff of his neck. Then, just like that, he was gone. I've seen Jimmy get thrown out of a lot of bars over the years, but I never saw him get thrown out better than when he actually threw himself out."

"That area around Grace Street started to turn into a real melting pot — cross-dressers, bikers, hippies. Woolworths and the like left, and more underground, head shops, clothing and records started coming up. The Band Box was a record store run by Darrell Cohen. … As far as local bands, the Good Humor Band were started by Douglas Freeman guys. Mike McAdam. They were very popular and excellent bar band for years and years. They were together for 30 years or something."

"Richmond Independent Press: A history of the underground zine scene."

Excerpt on the Cherry Blossom Music Fest Riot of 1974:

"Youths in the stands rushed at the officers and attacked them, fists flailing," reported The Richmond News Leader. Bottles pelted the scrambling police officers, where they retreated into a brick stadium building, remaining there while reinforcements arrived. Outside, a rampaging mob destroyed cars with fists, boots, and metal trash cans before setting them on fire. … There were about 100 arrests at the riot, most on drug and vandalism charges. Festival promoters accused city officials of reneging on promises to ignore marijuana use, although Richmond Commonwealth's Attorney Aubrey M. Davis Jr., City Manager William Leidinger and Public Safety Director Jack Fulton and denied any such agreements.

The riot led to the cancellation of the soul concert the next day. "None have commented on what seems to be an escalating guerrilla war between the police and Richmond's hip community," the Richmond Mercury's Glenn Frankel wrote in the May 1, 1974 issue. "But the city is gaining national notoriety: It is the only American city where streaking has led to violence, and it now becomes the first in 1974 to have a riot at an outdoor music concert."