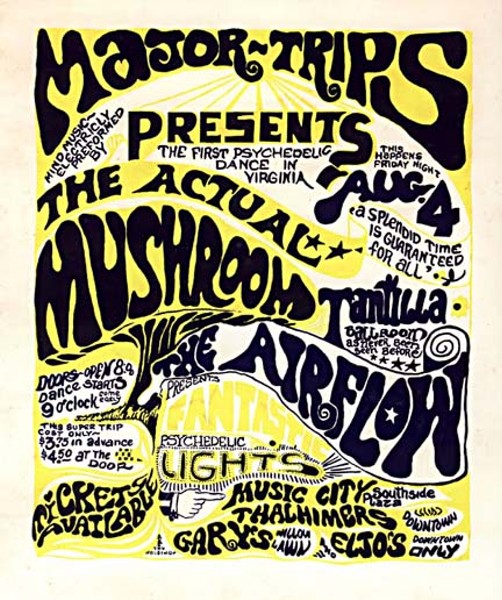 "The Actual Mushroom — Richmond's first psychedelic band in 1967— played covers: Moby Grape, the Who, people like that. I also was in the American Cheese Band with Chuck Wrenn and Art Dorow."

"There was the Actual Mushroom, a six-member musical group that made full use of the available electricity. It usually sounded like a streetcar screeching to a stop … most intriguing were the 1,000 Richmond Teeny-boppers who allegedly danced to the clanging beat of the Actual Mushroom. They looked more like oysters squirming out of their shells, worms with arms, jumping beans on an oily floor, a revival of snake-hipping aborigines. … Frequently one could not tell which persons represented which sex."

"Howard Fisher owned Grant's Tomb. I worked there in 1967 and '68. It was on Grace Street where they later built a Lums. There was a coffee shop in the back and a one-room store in the front where I worked that sold hippie paraphernalia. The coffee shop had barrels for tables and a platform stage. I remember mainly Bryan and Judy Bowers playing there, maybe Duck Baker as well. Rik Davis read poetry there. There were several incidents that I recall — we got bricks tossed through the front window when we had a Ho Chi Minh poster hanging there. We had a great psychedelic sign of a Victorian stained glass lampshade dripping blood that was stolen from out front."

"I was a Yankee from Washington, D.C. and did not want to live in the South, but I came down with a friend and walked around RPI (forerunner to VCU) campus. … We saw the Jimi Hendrix Experience and the Soft Machine at the Mosque that same night. No brainer — I'm going to art school here."

"I was connected with the Crossroads Coffee House in 1968 after the fire when it was at 1205 W. Franklin. Manager Steve Parks was hired for $10 week. Rodney Brian, Duck Baker, Rick Richardson and others played there. I saw Gary Gerloff, Eddie Peters and later Sunset Lou. John Bradshaw played a National steel guitar, finger picking behind his back perfectly, Mississippi Delta style. He left and went to work as a sword swallower with E.E. Straits Carnival. Richard Lee was an advertising student at VCU, when he dropped out and moved to Nashville and signed on with Crystal Gayle. Rob Schuwiler played with Mercy Flight with Robbin Thompson before he moved to Fairfax, and now makes museum-quality mandolins."

"I spent many enchanting evenings at the Scarlet Griffin as a goggle-eyed freshman art student, sipping cider, listening to Duck [Baker], John Basset, the Bosom Blues Band and the Pine Street Jug Band, hanging out at the sandal shop in the basement. … It was bohemian central."

"Me and a bunch of my buddies — we had a light show called the Air Flow Light Show, fashioned after Bill Graham and Fillmore West. We rented Tantilla Gardens, corner of Hamilton and Broad, a big old place in its glory days, considered the "queen ballroom of the South." The Fan, that was the closest thing we had to Haight-Ashbury.

"Grove Avenue Republic, a loose-knit bunch of stoned hippies, they were going to secede from the Union. They had shirts and flags printed up. It was pretty crazy. Right at Grove and Harrison, those couple blocks. During those late-'60s summers, block parties would spontaneously erupt. Bands would set up then the police would come. Everyone would go to Monroe Park on Sunday afternoons for be-ins. All kinds of bands would come down."