Richmonders Are Creating a Board Game Community With Help From Crowdfunding 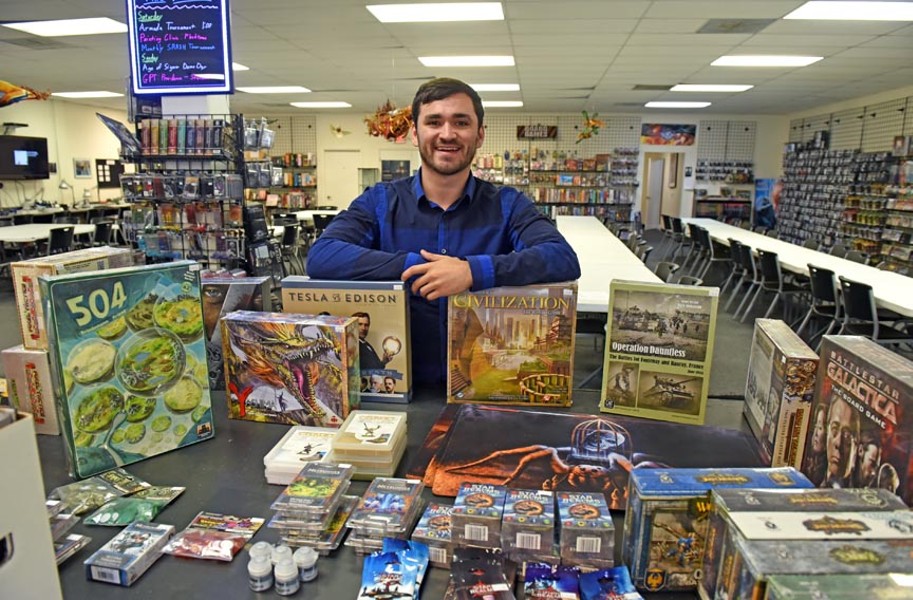 If you’ve ever needed to buy a present for that certain someone, it’s likely that you’ve poked your head inside One Eyed Jacques in the heart of Carytown.

For decades, the shop at Belmont and Cary has existed as a safe haven for table-top fanatics. With walls lined practically from floor to ceiling with puzzles, collectible miniatures and exotic board games, the store is a base for players in the gaming world, whether they’re looking to pick up the next hot item or get in a game or two of Magic: the Gathering.

The table where I’m sitting is reserved for a card tournament in a little more than an hour. Across from me sits Tim Armstrong, co-founder of RVA Game Design. A CarMax analyst by day, and amateur game designer by night, Armstrong whips up board- and card-game prototypes in his spare time in an attempt to one day see his creations grace the walls of stores like this one.

Fortunately for him, he might not be an amateur much longer.

“I’ve got some hot-off-the-press news,” Armstrong says. One of his most recent designs, Faulty Maps, a pirate-themed hidden programmed movement game, was awarded best in show at the Boston Festival of Indie Games days prior.

Also, an international board game publisher recently signed another one of his designs, Crime Spree, after it was shown off last month at GenCon in Indianapolis, he says: “Good timing.”

Armstrong is part of the board game renaissance that seems to be sweeping the country in the last few years. In 2015, a market research group estimated that the hobby games market reached $880 million in sales. Some analysts predict that number will top $1 billion for 2016.

This burgeoning growth is in no small part because of Kickstarter, where more than $200 million has been invested in board games since the site’s launch in 2009. Board games are in, and the trend doesn’t seem to be slowing down.

While he might not live in Richmond anymore, other local people and businesses occupy the various strata of board game designing success. Since 2010, Richmond-based Nevermore Games has been publishing various board and card games, most recently releasing its successfully funded card project, Dark Dealings.

Other enterprising game companies are also taking root such as Infinite Heart Games, whose Bunny Island has been in a prototype phase for more than a year and is about to hit Kickstarter.

“We’re trying to build a community here,” Armstrong stresses. “We’d like to have monthly meetings to provide a little more unity and structure.”

He also offers some advice for those interested in creating games: “Start prototyping right away. Everyone has an idea for a game. The sooner you get it to a playable state, the sooner you can see if it has promise.”

On that note, Tim was quick to plug RVA Game Design’s next big event, on Oct 15: an Unpub — a reference to the unpublished nature of the games showcased at such events. Unpubs often are the initial stepping-stones for game designers looking to get some down-and-dirty testing of their latest projects.

The relationship between game-makers and testers is symbiotic: The former receive some much-needed frank and honest feedback on their work while the latter get an opportunity to play and critique some never-before-seen games.

This will be the group’s second event. The one last November drew 19 designers, some from out of the state, sporting their future wares for more than 100 eager testers.

Battlegrounds, the Midlothian-based brick-and-mortar site that housed the event last year, again serves as the site for this gamapalooza. With free board game raffles to entice folks to attend, this is a come-one-come-all affair.

For Armstrong, it’s a matter of priorities. “Anytime I can get someone playing Setters [of Catan] over Monopoly,” he says, “I’ve succeeded.” S

The second annual Unpub will be held at Battlegrounds on Oct. 15 from noon to 11:59 p.m.