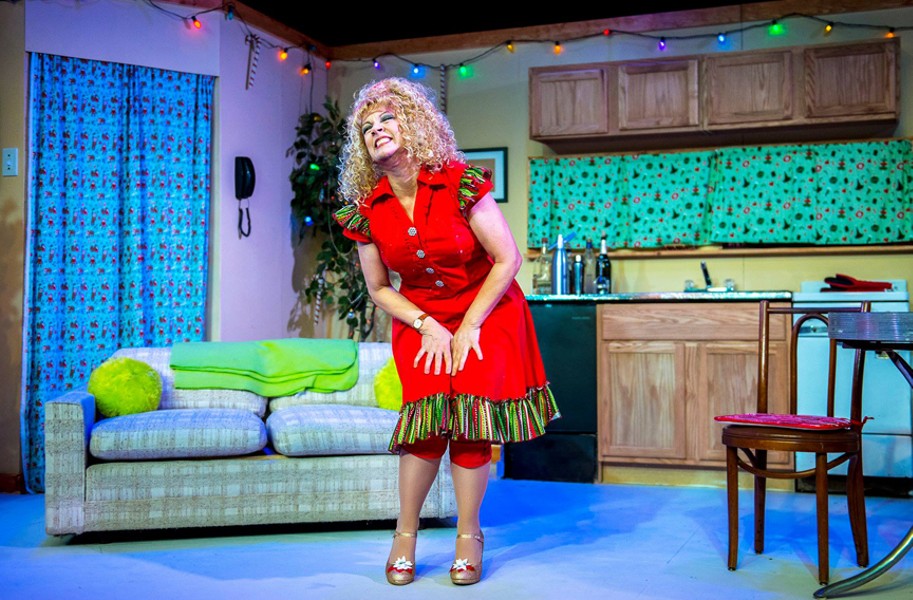 A wobbly Kimberly Jones Clark does fantastic work as Cindy Lou Who, who now lives in a double-wide trailer, deftly walking the line between comedy and tragedy.

Remember little Cindy Lou Who, the smallest Who in Whoville, who walked in on the Grinch as he stuffed her Christmas tree into a sack?

Richmond Triangle Players' production of "Who's Holiday," written by Matthew Lombardo, gives audiences a chance to revisit this Dr. Seuss character and catch up on how she's been all these years.

We enter Cindy Lou's world as she prepares to hold a holiday gathering. Her little double-wide trailer is decked out for the holiday, a Christmas tree twinkling in the corner. But poor Cindy Lou's festive mood sours as, one by one, her guests call to say they won't be coming to her party.

This production is thoroughly entertaining, full of raunchy, boozy adult humor and double-entendre, all delivered in mostly rhyming meter. But this play is also surprisingly touching, a compassionate portrait of a downtrodden woman. Director Dexter Ramey strikes a perfect balance between humor and humanism, covering a lot of ground tonally without ever feeling off-kilter.

Kimberly Jones Clark is fantastic as Cindy Lou Who, deftly walking the line between comedy and tragedy. It's a role she's played before, in 2015, when Richmond Triangle Players produced "Christmas on the Rocks," which features an earlier version of the adult Cindy Lou Who character, also written by Matthew Lombardo. Clark knows Cindy Lou well, and her performance is zany and hilarious, but also layered with nuance and depth. Plus she sings a few holiday tunes, including "Blue Christmas" and "Have Yourself a Merry Little Christmas," and there is even a surprise rap sequence. Clark does it all, and she does it well.

T. Ross Aitken's scenic design is versatile and smart and Michael Jarrett's lighting design transforms the space to represent different locations. Ruth Hedberg's costume design is one of the highlights of this show, as Cindy Lou goes through a number of fun wardrobe changes.

"Who's Holiday" is definitely a comedy, but what I love most about this show is that it is also a realistic depiction of a woman struggling to overcome her trauma. Cindy Lou's story is that of a child who was groomed into an abusive relationship with an older man — err, Grinch — that ends with blood on her hands and a stint in prison. Humor is just one of the habits Cindy Lou has developed to help her cope with a life fraught with difficulty.

But even as Cindy Lou veers dangerously close to train-wreck territory, drinking and smoking and popping pills until she's wobbly, she is never the butt of the joke in this play. It is important to note that we are not laughing at her, and that we never see her tip in that direction without also learning about the unfortunate circumstances that have led her here. She has been through hell at the hands of the Grinch, but she's survived to tell her tale, and we are here for it.

The show is short, running only about an hour. However, audiences should stick around past the intermission for even more holiday music, performed by Joshua Wortham and Georgia Rogers Farmer. "Who's Holiday" isn't for the whole family, but it is a great way to celebrate the holidays with friends. S