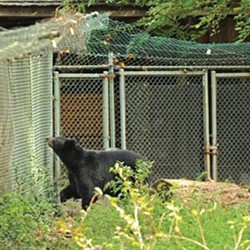 Animal lovers visiting Maymont will just have to grin and bear it.

The park’s bear compound has been closed after a severe thunderstorm on June 16 toppled a tree that damaged a perimeter fences, Maymont said on its Facebook page:

... Maymont’s bears will not be on view in their habitat for a while. A huge tree in the exhibit came down during the storm Thursday night, and it did significant damage to the perimeter fence. Please share with friends to spread the word. If you’d like to help fund the cleanup and repairs, consider a donation to the Maymont annual fund.

Bears have stirred controversy there in the past. In 2006, two black bears, Buster and Baby, were euthanized to be tested for rabies, after a 4-year-old boy was bitten when he reached through the fence to pet or feed the bears.

After a public outcry, the bears were cremated and later memorialized with a statue at Maymont.