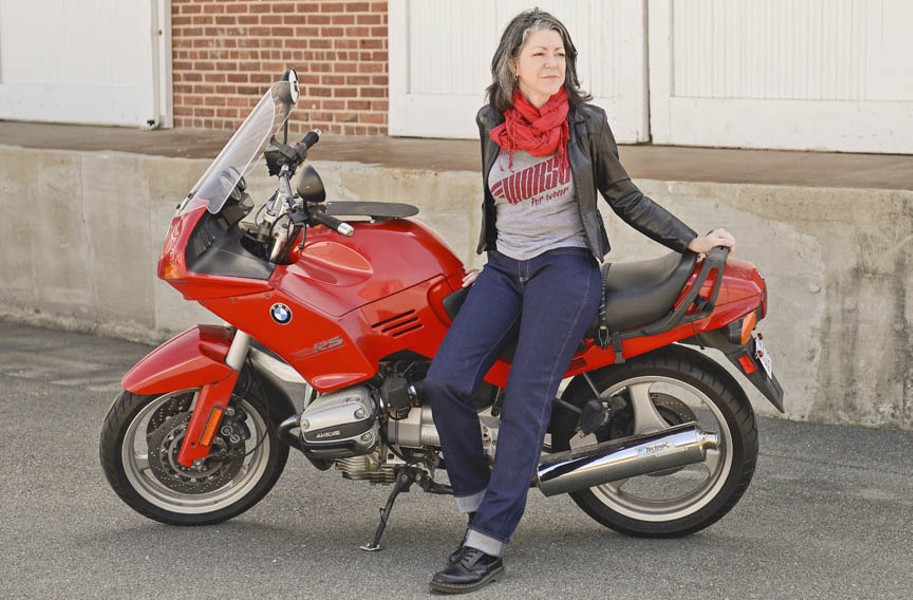 Ash Daniel Laura Smith is a co-founder of Worse for Wear, a company that specializes in durable women’s motorcycle clothing that is tough but still looks good.

Laura Smith had been a motorcyclist for 19 years when she finally had enough of the riding gear available for women.

It was either hideous, chunky, or God forbid, both.

When she first started riding she wore a sweater and jeans because it was comfortable. “It obviously wasn’t safe,” Smith says. “So I would eventually wear some kind of bulky jumpsuit over my clothes.”

Then there was the frustration of bringing spare clothes along.

So Smith and her husband and business partner, Scott Saunders — a Richmond native and Virginia Commonwealth University sculpture graduate — kicked the dust off their semi-settled Austin roots and took matters into their own hands.

A California native, Smith was working at Adobe in Austin, Texas, when she met her future husband at Dorkbot, an electronics and robotics meet-up she put together. After a few beers, the two bonded over a shared passion for making stuff.

Smith was complaining about a lack of decent apparel for women’s motorcycle gear, and Saunders suggested they make it themselves. The pair had limited experience in the apparel manufacturing business. But they were doing small projects as one-offs — which ignited the fire.

“If Laura couldn’t find something she wanted, she’d make it. I was making backpacks,” Saunders says. “It occurred that we can make things.”

Learning apparel manufacturing and design was a crash course. Smith went back to school at the University of Texas for its apparel design program and learned about textile design, fibers, yarns and fabrics that provide a measure of strength and abrasion resistance. But they credit their momentum to “a healthy level of curiosity and ignorance.”

“If I had known how much work was involved with this, start-to-finish, I guess I would have done it again just with more homework,” Smith says, laughing. “There’s just so much to learn.”

She says apparel manufacturing isn’t like reading a book that you know will come to an end: “It’s a radial learning process. You jump into the middle and look at what spins out from there.”

One thing they knew would be a key to their success was selecting the right fabric, Smith says — along with the machines you need to sew, where to get the material and thread that’s made in America, if possible.

So what makes this apparel abrasion-resistant for riders?

Smith notes that the denim used in most jeans is woven as a twill, made of yarn that runs top to bottom. The fabric used at Worse for Wear is different.

Instead the company uses a type of manufactured yarn called ultra high molecular weight polyethylene, which is then wrapped in cotton — allowing it be dyed blue, like blue jeans.

“It’s essentially a plastic that has a really high breaking strength,” Smith says. “If you were to turn that yarn down on a belt sander, it would take a while for it to abrade through whatever is underneath.”

Smith’s career previously involved design for software applications, something that led to the Women’s Measurement Project, a program that uncovered the pain points of women motorcyclists around the world.

“We had to rethink the industry standard measurements,” she says. “Where better to start than asking people for their measurements? They all had the same trouble finding protective gear that fits well and looks good … and doesn’t look like a biker chick, per se.”

Now Richmond-based, the company just kicked out its first prototype, a pair of riding jeans that were two years in the making. It also plans to dig into select markets, complete with a small storefront at its soon-to-be Scott’s Addition work space.

Smith and Saunders plan to join with other retail partners across the United States, including Scoot Richmond, as well as in Austin and Brooklyn, New York.

“It’s good to offer the product where a woman can go try it on,” she says.

Once they solidify the production process for the jeans, she says, they hope to expand the product line later in the year. For now, they’re hell-bent on making all wares themselves.

“It’s a lot different than doing a sketch and sending it out to L.A. for someone else to do the cutting, sewing and fabric sourcing,” Saunders says. “Maybe we’re just control freaks?”

“I wake up, make a cup of coffee and I work on a prototype,” Smith adds. “We are living and breathing motorcycle apparel right now.” S