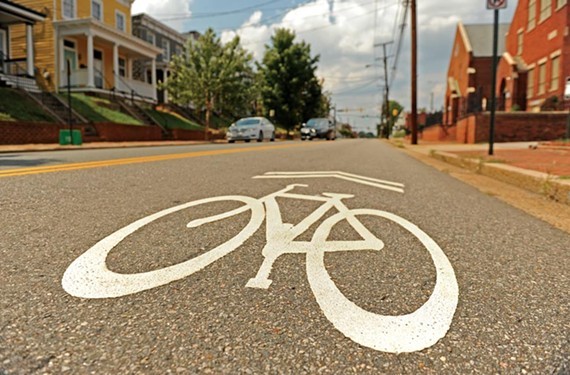 The meager bike racks outside Main Library downtown were packed Tuesday night for what was hailed as the city’s largest bike infrastructure meeting. More than 100 people come to offer feedback on 10 bicycle infrastructure projects, about 25 miles of lanes, in varying stages of development.

“All of these are very workable from a traffic capacity, volume issue,” says Jake Humboldt, the city’s pedestrian, bicycle and trails coordinator. “It’s really more about what kind of configurations do people want to see, what’s more likely to serve their needs and have them feel like it’s a corridor they can use.”

Humboldt says there will be more meetings and neighborhood input on all of these projects as plans become more detailed. Here’s a sample of traffic changes coming in the New Year:

It’s currently a four-lane, one-way street with lanes on both sides that double as parking and peak-hour travel for cars. The plan will create a barrier-protected, two-way bike lane between Monroe Park and Capitol Square, which Humboldt calls a “90 percent plan.”

The four-lane road, which narrows into two at Hatcher Street, would have buffered bike lanes added in some sections. In others, sharrows, the painted inticators on pavement, are proposed to maintain street parking and car travel lanes.

North Side: Brook Road from Charity to Azalea

South Side: Semmes Avenue from Forest Hill to Cowardin

The four-lane, divided road would have a bike lane created out of the shoulder, which is sometimes used for illegal parking.

The four-lane road with car parking on either side would be converted to two lanes for cars, with intermittent left-turn lanes. A buffered bike lane is proposed, either curbside, protected by a parking lane, or in between a parking lane and travel lane.

Six other plans are in the works to alter Grayland Avenue and Government Road, Patterson Avenue from Commonwealth to Thompson, Westover Hills Boulevard from Forest Hill to the Nickel Bridge, and a South 17th Street cycle track.

The city is accepting comments through mid-December on its website.