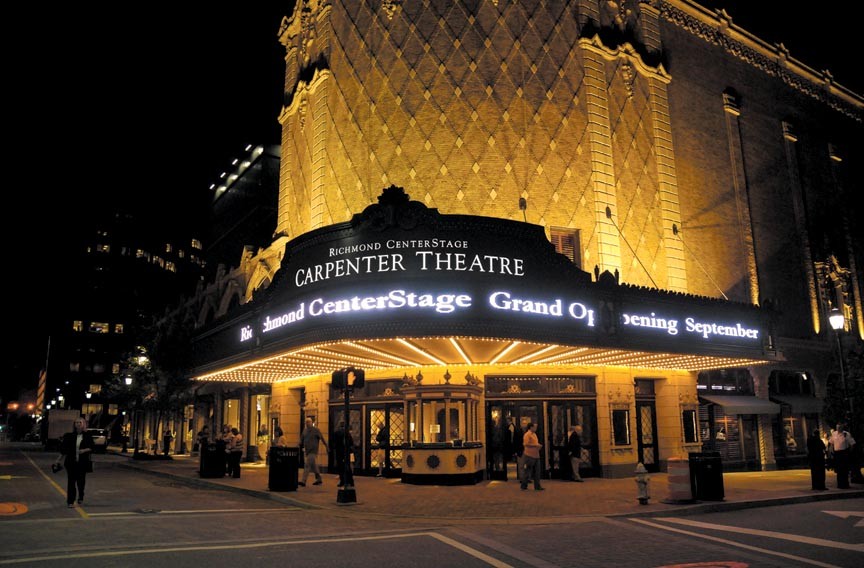 One of the founding members of CenterStage won't be performing at the downtown theater complex until at least the fall of 2013, if at all.

Richmond Shakespeare is moving its main-stage, indoor productions to St. Catherine's School, where it recently set up residency. The move represents a big leap for the troupe, which previously touted its relationship with CenterStage.

Since opening in the fall of 2009 after a $73.5 million renovation, primarily paid for with city and state tax dollars, some of CenterStage's resident companies have rented the facility sparingly.

Richmond Shakespeare has had no problems at CenterStage and will continue to hold staged readings there, says its interim artistic director, Jan Powell. The company had planned to rent CenterStage's Gottwald Playhouse in the winter, she says, but another group reserved the space.

But a number of local performing arts groups have stopped using CenterStage because of the high rent, according to a source involved with one of CenterStage's resident companies, speaking on the condition of anonymity.

But costs increase considerably when fees are added for amenities such as security, housekeeping, box-office personnel and concessions. Theater companies that would pay $2,000 for the run of a show elsewhere will pay between $5,000 and $10,000 at CenterStage, the source says.

The fees simply pay for personnel, Smith says, and CenterStage loses money on the Gottwald Playhouse. He adds that CenterStage has worked with companies that have requested flat rates, and has created long-term payment plans with groups that have financial issues.

The disparity between what resident companies can afford to pay and what the facility needs to recoup on expenses is the real problem, says Keith Martin, former managing director of Richmond Ballet, a CenterStage producing resident company.

"The tension has been there since day one that is akin to a rock and a hard place," Martin says via email. "What is missing is a rental subsidy endowment that could bridge the funding gap. I don't blame CenterStage Foundation; an endowment for just such a purpose was discussed at the very first meeting I attended in 2004. It just never became a reality."

Since CenterStage opened, Richmond Shakespeare's reported fiscal-year expenses have increased more than $85,000, according to the nonprofit's tax filings. From fiscal 2009 to 2010, rent and facility fees alone jumped from $9,313 to $39,526. In the most recent fiscal year, rental fees dropped to $9,506, but Richmond Shakespeare claimed additional expenses of more than $57,000 for CenterStage and nearly $42,000 for Agecroft Hall, the house where it performs summer shows. During the last three fiscal years, the nonprofit has accumulated net losses of $41,811.

Calls and emails seeking clarification from Richmond Shakespeare about its finances weren't returned by press time.

According to Jacquie O'Connor, managing director of Henley Street Theatre and vice-chair of the Richmond CenterStage Resident Companies Association, CenterStage and the resident companies are continuing to work "in a collaborative manner to keep costs affordable for all of our member organizations."