Richmond Seeks to Open Up Its Process for Selling Property 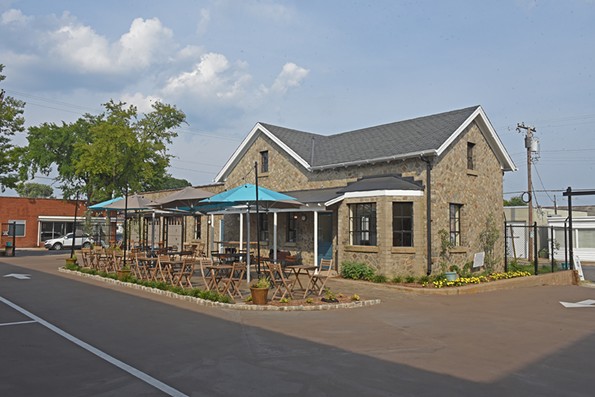 When Jon Lintvet of Tap26, an Ashland-based wine importer and distributor, was searching for a place to open a tasting room in Richmond, he drove around the city looking at buildings that sparked his imagination.

He found one in a distinctive stone building in Scott’s Addition that once housed stables
owned by the city. After what he describes as “a very opaque process,” the building went to the owner of Blue Bee Cider, which was previously in Manchester.

For Lintvet, it’s not the outcome that bothers him. “In this example, the right folks got the property,” he says. “They’ve done a beautiful thing with the space.”

But the cumbersome process with the city left Lintvet with some sour grapes — and with a sense that the city wasn’t getting the best deal on some of its public assets. Trying to buy the stables involved his own snooping, a rushed proposal, some fits and starts, and an outcome that seemed predetermined.

The Department of Economic and Community Development oversees the process and some city members are trying to reform it.

This week, the city’s Land Use, Housing and Transportation committee for the fourth time continued a proposal by Councilor Parker Agelasto that would create a process for competitive bids before unsolicited offers are accepted.

The ordinance, first introduced in March, would determine if a property should be categorized as surplus and how to consider offers for it, he says. The land-use committee would help set criteria for the administration’s review of proposals.

Asked about the continuances, Agelasto says he wanted to get ahead of the process by conducting a thorough review of all city-owned property — around 1,500 parcels. He introduced a resolution last month requesting that each department conduct an inventory.

“This should lead to a large number of surplus properties being considered for disposition and thus pre-empting the unsolicited bid process for rather mundane transactions,” Agelasto said in an email.

Councilor Andreas Addison put forth a related ordinance last month, requiring that the inventory list be published on the city’s website.

At the committee meeting, some members were eager for action. “I’m just wanting us to get somewhere,” said Councilor Kim Gray, who was involved in early meetings about the proposal. “It feels like we’re spinning our wheels here and not moving with anything.”

Economic development director Lee Downey expressed some confusion about whether the ordinances were competing or working together. Addison’s ordinance and Agelasto’s second had come out since the first one, he said.

“One concern we have there is the detail of what’s being asked for,” said Downey of Agelasto’s second, inventory-related ordinance. There were “about 21 pages of small print” of information Agelasto’s ordinance requested on the 1,500 properties.

Downey wanted more time to look at the requests and confer with the other council members about creating a single list with a manageable amount of data. He agreed that the list and a clearly stated method for disposing of properties could be an asset in the unsolicited bid process.

“It’s just a matter of, once we do this, let’s make sure we have the right categories in there,” Downey told the committee. For example, the city would need to determine what “for sale” legally means.

In Lintvet’s experience, it was a difficult thing to determine. He called around when he learned the stable space was city-owned. “We were told there were a number of unsolicited offers on the property, and they were far down the path and not to bother,” he says.

Six months later, he read an article about another business owner who had expressed interest in the space. Lintvet made calls and found that media coverage had turned the bid into a formal process. He made a cash offer for the full asking price.

“We were like, ‘Who do we send this to?’” Lintvet says. Once he found out which department, he was hopeful about his prospects. He followed up with a proposal, based on guidelines set out by the Economic and Community Development Department, and worked on securing options for parking.

Then a week before the first in-person presentation, the city reassessed the property, he says. “It had gone up by $150,000.”

Lintvet increased his offer to match and was told it was down to two or three finalists. Blue Bee eventually paid the total assessed value: $395,000.

More recently, the unsolicited offer process came under scrutiny over a proposal by
City Center Development for a mixed-use tower at Grace and Sixth streets. The
developers made an offer of $3.95 million on a parcel valued at $6.36 million. They backed out of the plan in early May, after City Council continued the case multiple times over concerns about the plan and its scope.

Lintvet was enthusiastic about the ordinances before council and the proposed website,
but only if they initiated an ongoing process, as opposed to the city simply posting a one-time list of city-owned properties.

Agelasto’s and Addison’s ordinances will be heard at the Aug. 22 committee meeting.