+9: Bicycles Become the Spoke of the City

The year of the bike was dominated by the UCI Road World Championships, and the hordes of spectators, hoopla and economic activity surrounding them. But the last leg of the Virginia Capital Trail was completed too. The 52-mile route, celebrated for its beauty and accessibility, opened a year behind schedule in October, but just in time for the race.

All the while, a web of bike paths and lanes increasingly linked the city together — bringing bike enthusiasts a step closer to safe, motor-vehicle-free routes. It’s all part of a vision recognized by the city’s bike master plan, released in May 2014. It lays out a path for adding bike infrastructure as far out as 10 years. Potential state, local, nonprofit and federal funding sources are identified in the plan.

A bike boulevard is planned along two-mile length of North 29th Street in Church Hill. The city is expected to provide $130,000 for the $650,000 project, the rest to be paid for through federal funds. It’s the city’s second bike boulevard — a corridor meant to protect bicyclists with traffic calming features. The first was along Floyd Avenue. Also worth note is the Armstrong Bike Park, which opened last year and is gaining ground, billed as “the nation’s first and only inner-city mountain bike park,” a 1.5-mile trail within Fairfield Court.

But as the love for bikes reaches its zenith, concerns loom. Much disapproval shadowed the Floyd Avenue project, with Fan residents worrying about the availability of parking. And serious accidents brought safety to the forefront. 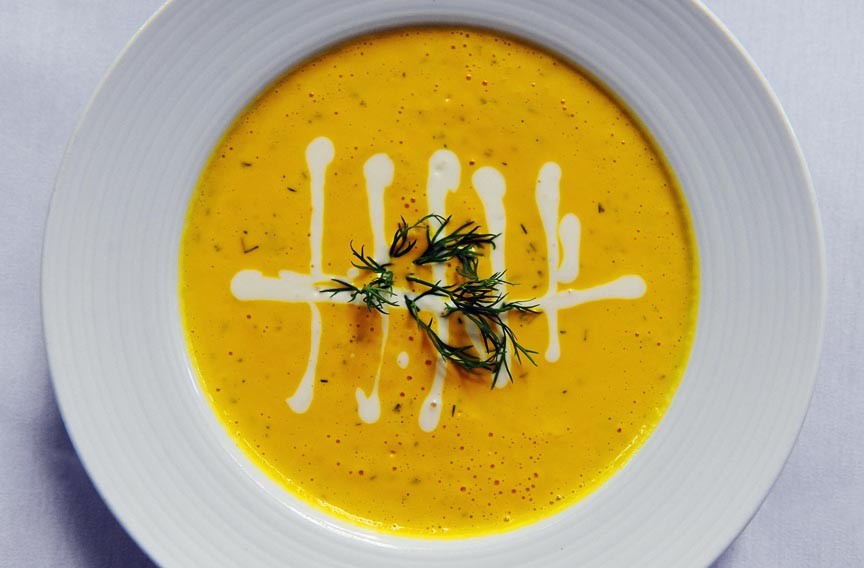 Once upon a time, an East Grace Street restaurant row was a just little idea bouncing around in Jason Alley’s head. Along with partners Michele Jones and Ry Marchant, he opened Pasture four years ago on a street of abandoned downtown retail shops. It was slow going for a while. Rappahannock opened on the next block and that helped things. CenterStage, soon to be renamed the Dominion Arts Center, provided diners, albeit erratically.

Things felt a little shaky when 525 at Berry Burk couldn’t make a go of it and shut its doors in 2014. But by the end of 2015, the street seems poised to roar back to life. Julep’s New Southern Cuisine moved from Shockoe Bottom to 420 E. Grace St. Pop’s Market on Grace, a breakfast and sandwich place plus market, moved into the old Cokesbury Books building. Lucca Enoteca Pizzeria, owned by Maya Mexican Grill, and Tequila Lounge’s Maria and Michael Oseguera, took over the Berry Burk space, and across the street, the Secret Sandwich Society plans to open in the spring.

Rapp Sessions, a small oyster bar to hold the spillover from Rappahannock, will slightly lengthen the strip at the beginning of the year and help ensure that if you can’t get a table in one place, you can bend an elbow and down a raw one to hold you over until you sit down at the next spot.

Sure, if you have the backing of a national organization such as the National Folk Festival to get your ball rolling, you stand a good chance of survival. But the music-festival circuit can be rough. The homegrown Fall Line Fest started in 2013 with more modest means, highlighting local bands while piggybacking on touring bands headed to and from the larger and easier to navigate Hopscotch Festival in Raleigh, North Carolina.

This year, organizers pulled the plug citing “an inability to attract sponsors” and instead held a smaller, multivenue event with some of the bands already booked called Extragavanza. Fall Line folks had it right with a grass-roots approach that included local artists, but holding a mostly local festival with no big-name hype isn’t enough in the era of huge music festivals, where everyone is competing for advertising dollars and media attention.

Still, festivals like these have a way of increasing a city’s profile and bringing in much-needed dollars for local business when they succeed. Maybe one day. 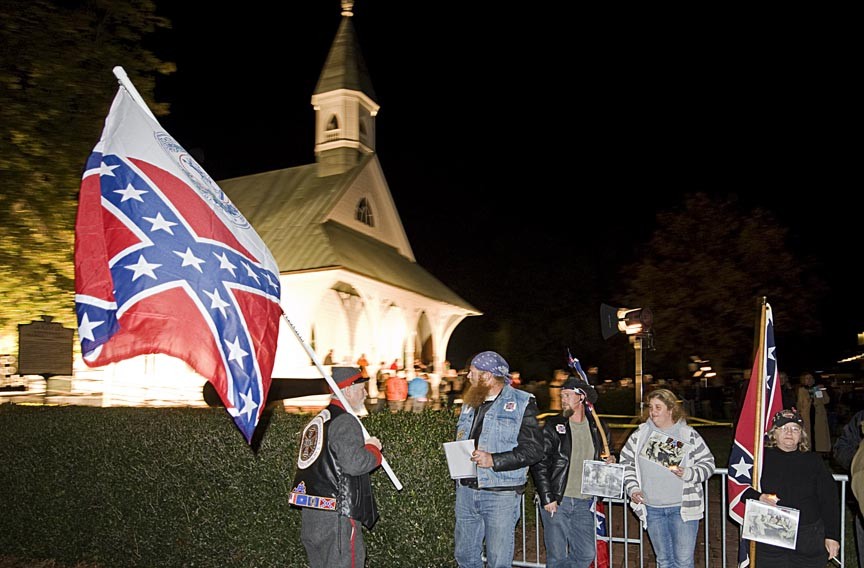 It's been 150 years, but the Confederacy still rankles. Richmond always finds itself embroiled in the debate over this chapter of its history and how symbols should or shouldn’t exist as a reminder. Nothing is as divisive as the Confederate flag itself, playing out recently over the backdrop of the Civil War sesquicentennial. But the issue reached a hot point locally after the shootings in Charleston, South Carolina. Shortly after the tragedy, the symbol was removed from that state’s capital grounds.

Virginia Gov. Terry McAuliffe followed suit by banning a state-sponsored license plate featuring an image of the Confederate flag. It was a move that infuriated flag supporters, who rallied with cries of “heritage not hate.” The Virginia Flaggers took to the streets in convoys of lifted trucks decked out with flags to protest what they saw as an attack on their First Amendment rights. They also came out in full force to rally against an artistic expression — also a form of free speech — when the Confederate Memorial Chapel was used in the annual InLight Richmond art exhibition. The controversy attracted droves of spectators eager to see the work. But a blatant statement about the flag’s ties to the days of slavery was made when the statue of Confederate president Jefferson Davis was vandalized with the words Black Lives Matter.

The Confederate debate was showcased to the world during the UCI bike races. As international visitors craned their necks to look at the statues on Monument Avenue, some local political activists criticized the city’s decision to include the corridor in a race route. But the Confederates capitalized on the high number of spectators with a misspelled banner that read “Confederate Heros Matter” pulled across the sky. The flaggers said the snafu didn’t take away from their point, and later digitally added the missing E into online posts. 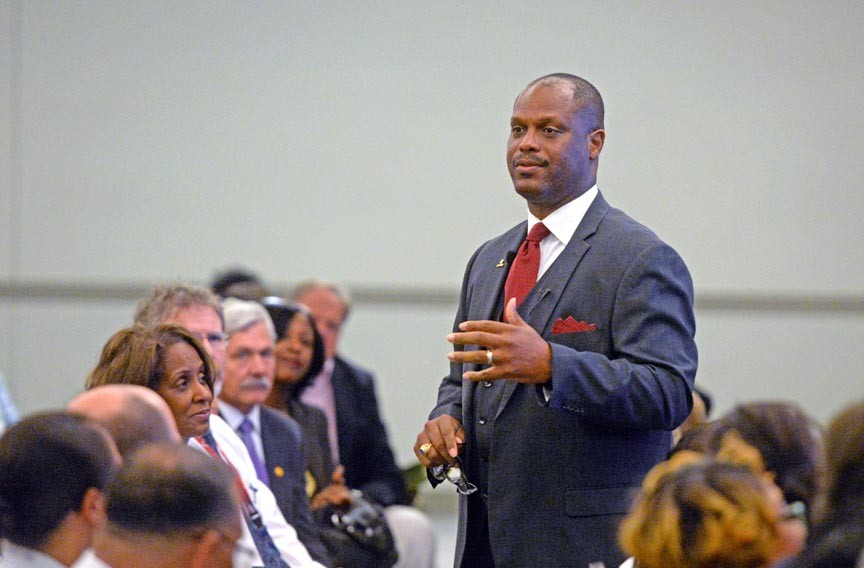 -6: The School Board Must Fight For Its Place at the Table

In October, school and city officials met for the second time in 11 years to discuss how to pay for the division’s facility needs. The meeting was a gesture of good will, but was overshadowed by the absence of Mayor Dwight Jones despite an invitation from City Council. His chief of staff attended but left before budget talks began.

More than two months later, tension continues to build as school and city officials face off over the $169 million first phase of a 15-year plan to overhaul facilities. The city won’t have the money to move forward without raising taxes, which the Jones administration says it won’t do.

School leaders say that something must be done immediately to keep classes in Richmond’s South Side from bursting at the seams. Richmond also is faced with aging schools that are leaking and crumbling after countless Band-Aid repairs.

But they’ll have to wait in line. The city’s debt capacity is only $50 million, and other projects such as road and vehicle repairs are competing for that money. City leaders have suggested that the school system try redistricting to alleviate congestion, but schools officials say that’s not enough. It’s already part of the first five-year phase of the facility plan. Over 15 years, officials hope to spend $563 million on the effort. 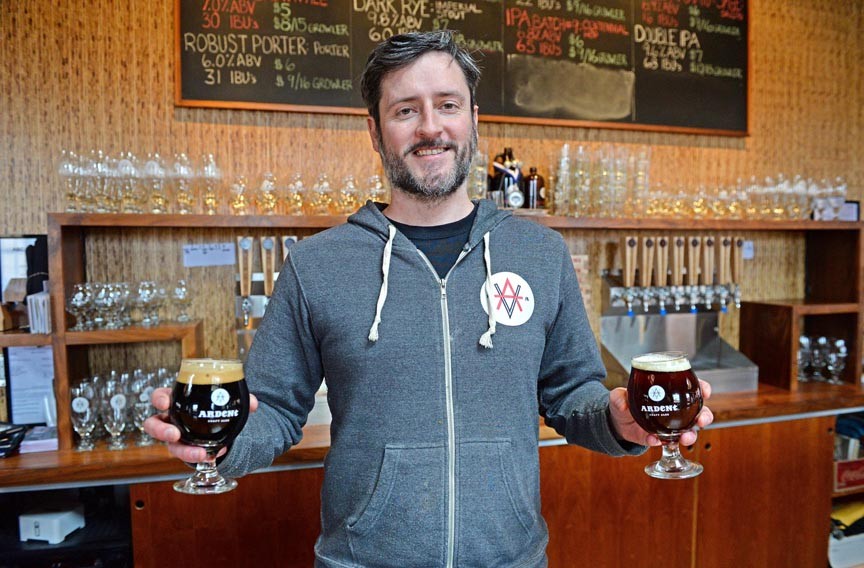 Restaurateurs, brewers and developers have been breathing new life into Scott’s Addition, and the neighborhood seemed to come into its own this year.

The area thrives from a mix of factors. It’s centrally located, near interstates 64 and 95, and close to such amenities as The Diamond and Movieland at Boulevard Square. The neighborhood’s historic designation allows developers to take advantage of tax credits to revitalize buildings. There’s also the bonus of city real estate tax abatement, which gives developers a break on paying taxes on improvements for as long as 10 years.

This section of town is packed with industry, but has grown more diverse with businesses that follow new lofts springing up constantly. Roughly 1,200 apartments opened in 2014, according to the Scott’s Addition Boulevard Association. Other major renovations are in the works, too. A former asphalt plant on Roseneath Road is scheduled to be converted to 300 luxury apartments, while the Seaboard Bag Corp. building is now a 94-unit apartment complex, complete with solar power.

As rooftops are raised, restaurants and breweries follow, joining early comers such as Lunch and Supper and the Lamplighter Roasting Co., which have become staples of the neighborhood. Well known chef Peter Chang, of Peter Chang’s China Cafe in Short Pump, plans to open a restaurant in the Hofheimer building on West Broad Street. The Veil Brewery and Blue Bee Cider are scheduled to open in 2016, and will join the trailblazing Ardent Craft Ales, which started pouring last year.

+3: VCU Recovers From Its Breakup With Shaka Smart. (Kind of).

The coaching baton passed to Will Wade in April without any real havoc — unless you count repeating the word endlessly to make sure fans know their team remains familiar and marketable. But as always, the proof comes on court, and the Rams no longer have the key players that made havoc so effective. While it’s not quite panic time, fans got nervous after the Rams lost to most of the good teams they played this season.

But hey, whereas Shaka Smart’s name recognition was a great recruiting tool, Wade is no slouch in that department. He’s young and hungry to prove that his brand of hustle and obsessive analytics works. It’ll be easier to judge his debut after conference play starts in the solid Atlantic 10. For now, cool your panic room.

When the University of Richmond searched for a president to replace noted historian Edward Ayers, it came up with a remarkable choice — a veteran college administrator and well-known cellist who’s played with major orchestras.

Ronald A. Crutcher arrived on campus this summer from Wheaton College in Massachusetts, which he led for 10 years. Acclaimed for his humility and acumen, he quickly settled into his new role as only the 10th president of the 180-year-old private university. He jumped right into such activities as the UCI Road World Championships, which saw a race start from the Richmond campus, and lent a helping hand on freshman move-in day.

He told Style that one of his goals was to make sure that Spiders continue to be need-blind when it comes to financial aid. With its endowment totaling more than $2 billion, UR is trying to make certain that students from families who make less than $60,000 a year have access to a 100-percent tuition ride.

“Accessibility and affordability are dear to my heart,” says Crutcher, who’s making sure that revenues stay healthy. One thing that might help at fundraising cocktail parties is his uncanny ability to listen to several conversations at once thanks to his years playing in orchestras.